Twenty-first century pro-lifers take for granted that life begins at conception. But for Europeans in the Early Modern Era (1500-1800), the question of how Human life began was very mysterious. Lacking any notion of cell Theory, or sufficiently powerful microscopes, scientists of that age relied on studies of various animals to draw conclusions about human generation. Chicks, frogs and insects were the most widely used, but dogs, deer, rabbit horses etc were also employed.

Witnessing an Aggressive Event
Well said Mr. PM, We’re racing with t…
Pineapple juice benefits for skin
Medical Equipment for Molecular Diagn…
Earn Extra Income From Home
There were, broadly speaking, three camps on the issue of the generation of life.
The first camp were the epigeneticists. This label is somewhat confusing for contemporary readers because epigenetics is a new field of science regarding the influence of the environment on genetic expression. During the age of the Scientific Revolution, it referred to the belief that the embryo was not pre-fabricated, that it evolved from other tissue.
The epigeneticists were a minority view until into the nineteenth century.  Epigenetics, for most of our period, was not the preferred theory among scientists studying the issue, but it was taken seriously enough that researchers felt the need to address its arguments.
The opposite of an epigeneticism was preformationism. Preformationists posi that the embryo or its germ pre-existed, and that fertilization involved the process of launching its growth or unfolding.
There were two kinds of preformationism:
Ovism posited that the embryo or its germ pre-existed inside the female egg. A “germ” meant a mass of embryonic parts that either came together or evolved into what would be recognized as an embryo. This was the most widely held theory until the 19th century.
Spermism placed the embryo or its germ inside the sperm cell.  It was a minority view, but it was ovism’s biggest rival.
Adding to the complexity of views was the notion of of emboîtement or encasement: the belief that human life is not generated, but simply exists inside either the egg or sperm and fertilization provokes development. The generations are contained one inside each other like a series of Russian dolls.

1.    Aristotle (384 B.C.-322 B.C.) Epigeneticist.
Aristotle’s views on the beginnings of life were among the most widespread before the Scientific Revolution. While scientists were researching developmental biology, his views would have been familiar to the wider public, due to their antiquity.  Aristotle believed that the male emitted a seed that mixed with a feminine liquid. The male brought the form and the female brought the matter. The embryo developed in successive stages in the female uterus, which served as a nest.  Aristotelianism in general was in decline in the 17th century as it relied substantially on deductive reasoning, whereas the new scientific method relied on empirical data and experiments.

Hippocrates’s views on the origin of life would have been transmitted through Galen (c. 130 AD – 210 AD), the most widely consulted medical authority in the pre-scientific age.
He believed that both sexes emitted a seed (and thus the female emitted a sperm.) The predominance of one or the other determined the sex of the child. This theory had the advantage of being to account for a child retaining the characteristics of either parent. 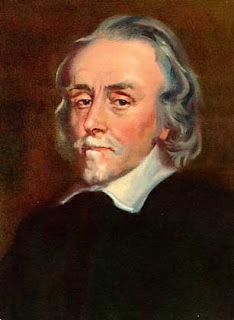 Better known for having accurately described blood circulation, he made contributions to the field of embryology which he published in 1651 in Exercitationes de generatione animalium. To him is attributed the phrase “ex ovo omnia”—everything comes from an egg, an idea he advanced against spontaneous generation. He claimed that even maggots and worms developed from eggs. Notwithstanding the fact that he is remembered for this famous phrase, he was not an ovist.  (The conflict between spermists and ovists would come develop in the 1670’s after the discovery of spermatozoa  and the description of Graafian follicles.)  He was an epigeneticist who believed that the spirit of the spermatozoon—the aura seminalis-- fertilized the uterus, at which time produced the egg from which developed the embryo. Since he believed the embryo gradually developed, he was an epigeneticist.

4.       Régnier De Graaf (1641-1673), Ovist.
This Dutch physician is best remembered for describing the development of the Graafian follicle, the fluid-filled sac in which an ovum develops and from which it is released during ovulation.  Every woman is born with 400 000 follicles in her ovaries, but normally only one ovum is released per cycle (he never saw the human ovum, which was much smaller, but he concluded it existed inside the follicle.)
He determined that the ovaries were the source of eggs and that all higher animals possessed them. It was his description of ovaries that led him to reject the name “female testicles” for that body part.

A very shy and religious Protestant from the Netherlands, he is mainly remembered as an entomologist. In his Biblia Mundi, he conclusively proved that egg, larva, pupa and adult were essentially the same organism and belonged to the same species.  We take this information for granted today but it was not obvious at all to a world where microscopes were only beginning to be used. 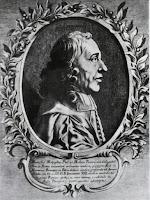 Trained in medicine, he was the first to use the microscope to examine chick embryos at early stages, some as young as twelve hours old. In 1673, he published his findings in De formation de pulli in ovo, in which he described the evolution of body parts as if they were already pre-formed. He claimed to have seen an embryo in an unseminated chick and gave rise to preformationism. He was mistaken, but whenever anyone would object to ovism, Malpighi’s work was frequently cited as proof, as if it were a trump card that resolved the whole dispute. He became physician to Pope Innocent XII in 1691. 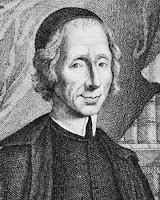 An Oratorian priest who was better remembered as a thinker than a researcher (though he had his share of new discoveries.) His philosophy and theology were highly idiosyncratic, which led some of his works being placed on the Index. His seminal work was Concerning the Search after Truth, in which he developed a speculative Cartesian system that drew on a wide range of sources, including scientists like Swammerdam and Malpighi. His writings reached an influential audience, and through them popularized, among other things, the idea of preformationism and encasement. His role in the history of embryology then is as an influencer rather than as a reserarcher. He believed that all embryos had their origin in Eve, and that every embryo existed inside another embryo, so that fertilization simply awakened its development. Once all these embryos had been formed, it would be the end of human generation. 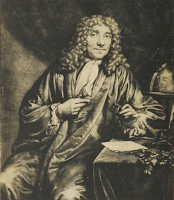 8.       Antonie van Leeuwenhoek (1632-1723), Spermist.
Dubbed “The Father of Microbiology”, he is credited with the discovery of spermatozoa through the microscope. He obtained semen samples of many species, including human, which he said were obtained in a moral manner. He dubbed sperm cells as “animalcules”.  He believed that the preformed embryo existed in these animalcules. Defenders of his theory referred themselves as animaculists but today they are known as spermists. 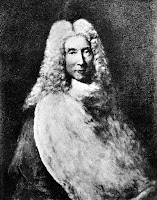 9.       Nicolas Andry de Bois-Regard (1658-1742),  Spermist.
This French physician was nicknamed Homo Vermiculous for his obsessive interest in worms and parasites. He is also dubbed the Father of Parasitology.  He promoted spermism in his book An Account of the Breeding of Worms in Human Bodies (1700), in which he likened spermatozoa to worms. The germ of the embryo was said to reside in to sperm which would enter the egg that would house and nourish the germ.  Fertilization would activate the embryo, which would then develop and grow until it reached a certain size, at which point it would hatch out of the egg.

10.   Jacques Gautier d’Agoty (1717-1785), Spermist.
This French anatomist was a minority voice in his field as he rejected both epigenetics and classical preformationism.  In Conjectures sur la generation contre les oviparistes & les vermiculistes (1750) he posited that the fetus arose inside the seminal vesicle and was purified from the blood of testicles. The creature would be thrusted into the woman during intercourse and gestate inside her, fed by female semen and menstrual blood. He did not believe the egg played any part in reproduction. In fact, he assigned only a small role to the woman. His theory was quickly discounted, and it marked the beginning of the end of spermism.  He was also a gifted painter and the illustrations that accompanied his writings—some including representations of the unborn-- were veritable works of art. 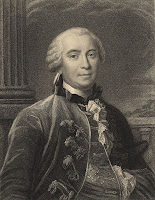 11.   Georges-Louis Leclerc, Comte de Buffon (1707-1788), Epigeneticist.
This erudite and very influential naturalist produced a thirty-six volume Histoire Naturelle. On the subject of human generation, he broke away from prevailing theories of preformation and put forward a completely unique and revolutionary idea for his time: each sex produced a seminal liquid (in the woman, the liquid would be located in what we now call the Graafian follicle.)  At fertilization, the fluids from the man and the woman would come together. These liquids contained “organic molecules”, a kind of living atom.  The molecules would then form the organs of the fetus according to the origin: molecules from the head would produce the fetus’ head, molecules from the heart would form the heart, etc. The sex of the fetus would be determined by the origin of the molecules: if they came more from the father, the fetus would be a male. 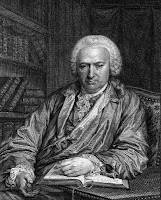 A citizen of the Republic of Geneva, in his early years, he studied plants and insects, his most famous discovery being parthogenesis in aphids. As his eyesight grew worse, he turned to the speculative side of natural science, based on his experiments in his younger years. In 1762, he published Considérations sur les corps organises, in which he put forward important modifications of the theory of ovism, in order to answer a number of epigenetic objections. Instead of suggesting that the embryo itself existed in the egg, he put forward that a germ of an embryo existed, a set of pre-fabricated parts that came together in the fertilization process. And, replacing the idea of an infinite encasement of past generations, he put forward a theory of dissemination, postulating that infinitely small and invisible germs roamed the world until they found their corresponding species, which made fertilization possible.
13.   Caspar Friedrich Wolff (1735-1794). Epigeneticist.

He is considered one of the founders of modern embryology.  He studied medicine, and in 1759 he published Theoria generationis, in which he conclusively refuted preformationism. His epigenetic opinion was so controversial for his time that he had trouble finding academic employment. (He ended up being a field doctor for the Prussian Army in the Seven Years’ War and then lecturing privately afterwards for some time.) In his dissertation he advanced the idea that embryos developed from undifferentiated tissue. To account for organic matter coming from a primordial liquid state, he posited a vis essentialis corpis, an essential force that solidified the liquid so that it could gradually become and organism.
14.   Lazzaro Spallanzani (1729-1799).  Ovist. 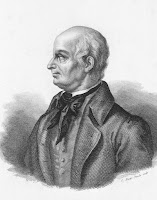 Father Spallanzani, nicknamed “Il Magnifico” by admirers, is best remembered for his famous experiments refuting spontaneous generation. Fellow Catholic priest John Tuberville Needham, a scientist and believer in spontaneous generation, boiled meat juices, killing off all life forces, then placed the broth inside vials. Some days later, microbes grew inside the jars. Spallanzani repeated the experiment, using a higher temperature and making sure the containers were airless and hermetically sealed. No microbes appeared. When Needham complained that Spallanzani had killed off the “vegetative force” responsible for spontaneous generation, the latter repeated the experiment but this time opening the flask. Microorganisms soon grew, disproving that there was any need of any “vegetative force.”   Spallanzani is also known as one of the last of the proponents of ovism.