Greenberg's 'Lee and the Lingering South' 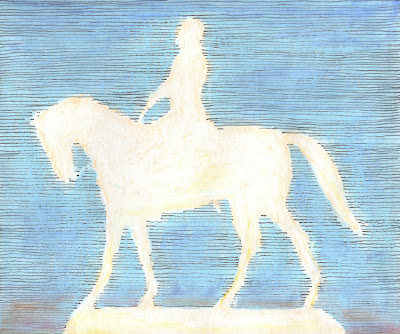 The piece above, "Mercie's Lee," is an ink and pastels study of the statue of Gen. Robert E. Lee in my neighborhood. That statue itself is scheduled to be removed from Monument Avenue this week. Until the last 10 years, such a removal was largely unthinkable in Virginia. Now, for many Richmonders, it seems overdue.
Three years in the making, French sculptor Jean Antoine Mercie's solemn bronze statue of Lee was unveiled in 1890. It was the first of Richmond's renown series Confederate monuments to be installed on on Monument Avenue. Now it will be the last to exit.
For the sake of everyone's safety the City of Richmond plans to have streets blocked off in every direction from the massive memorial for two or three blocks. No driving, no parking until the removal ordeal is over; the estimate is three or four days. When the job has been done, yet another souvenir of a previous time in the South will no longer be on public display, to be worshiped ... or hated.
"What is the South?" Arkansas writer Paul Greenberg (1937 - 2021) asked in a series of columns. The one I've linked to below was published first in 2008. Here's a pullout from it.

...On this Lee's Birthday, the South seems only a lingering shadow of the great civilization-and-barbarism she once was, but that ended ... when? April 9, 1865, at Appomattox Courthouse? With the last great Southern novel, and which was it? When cotton was dethroned? When industry overtook agriculture, when the city took over from the country? Did the South end with the coming of air conditioning or of the two-party system? Or when the race issue ceased to be The Issue, and became just another Northern-style ethnic competition and/or collaboration?

The answer to that question always seems to come down to this: The South ended with the previous generation -- which fits in well with the common perception that each generation becomes a little less Southern, a little more Americanized. It's like Zeno's Paradox about the hare who always halves the distance between himself and the tortoise, yet never catches up: Southernness is always fading yet never disappears. Our children will doubtless say it ended with us even as it continues in them.

Click here to read all of Greenberg's piece, "Lee and the Lingering South."

Greenberg's 'Lee and the Lingering South'