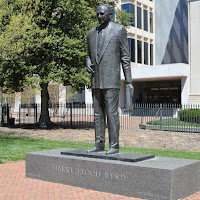 In June of 2020, Richmond's citizens were living at the epicenter of a cultural earthquake. In the wake of the National Demonstrations that erupted following the murder of George Floyd, in Minneapolis, in Richmond bronze statues of Confederate heroes were chased off of their haughty pedestals ... one way or another.

When the time for celebrating the Lost Cause ran out, it ended abruptly.

On Mar. 19, 2021, Gov. Ralph Northam signed the law to banish the statue of Harry F. Byrd from the grounds of Capitol Square. That's the same Harry F. Byrd who for decades commanded Virginia's only political organization with power -- the ultra conservative, anti-union, anti-integration Byrd Machine.

The decision to remove Byrd was a sure sign the shaking-things-up that started in the Fan District was being felt in the Commonwealth of Virginia's halls of power. Byrd's statue has stood where it still is (at this writing) since 1976. It will be removed at a time yet to be determined, some time after July 1, 2021. Where all the statues that have come down over the last year will end up is yet to be determined, too.

When self-appointed statue-removers pulled down the Jefferson Davis statue, last summer, naturally it was first seen as an anti-Confederate statement. That, as well as an anti-racism statement. Still, I think, style-wise, more was in the air.

For instance, just the night before a partying mob yanked the Christopher Columbus statue from its plinth in William Byrd Park. Then it was dragged it down a hill and dumped into the park's Fountain Lake. Plenty of photos of the ceremony -- such as it was -- showed up on Facebook, which documented the mirthful spirit of the occasion.

In my view that act of defiance was not just about a recognition of Columbus' much-tarnished image as a heroic figure in history. Now I'm suggesting that part of what was happening was a rejection of the whole concept of forced hero-worshiping. Furthermore, my sense of it is we may now have an ascending generation -- let's say 16-to-35s, who have a William Tell attitude.

Somewhat like Tell, the 14th century Swiss hero, when they find themselves passing today's equivalent of Albrecht Gessler's hat, they simply can't stand being compelled to salute it. As well, this same age group seems quite attracted to the potential of focused boycotts, national demonstrations and other types of mass movement powers.

As a Richmonder who has lived near the Lee Monument for a long time and given the subject of public art some thought, it looks to me like the era of everyday people having a sort of automatic reverence for public displays of heroic sculpture -- depicting a particular moment's political celebrities -- may well be passing as you read this.

Meanwhile, the process of ridding this city of its bronze idols and their pedestals is probably going to be complicated. First, after last summer's series of removals, two Confederate memorials remain displayed in the public way. They are Gen. Robert E. Lee and Gen. A.P. Hill. At this point, it seems likely they will be removed soon.

Second, what to do with the statues of Lee, Hill and the others that have already been removed is being studied. It should be and there's no good reason to apply an artificial deadline. The most important thing is they aren't on display, looming over the public way.

Third, what to do with the pedestals, and/or the ground on which they stood, is being studied, as well. Good. We Richmonders need to take care to make sure that in each case whatever replaces a banished Confederate memorial is a step in the right direction. Therefore, maybe new statues of people who happen to be popular today isn't the best idea for tomorrow. Public art doesn't have to be a depiction of a person (usually a man) striking a pose.

Fourth: The most interesting challenge, decision-wise, concerns the future of the Lee Monument pedestal, as well as the grassy circle around the base of it that picked up a new name last summer -- "Marcus-David Peters Circle." That site has become an important site in the story of Richmond's long overdue exorcism of its Lost Cause haunting.

Great care should be taken to do right with what probably should become another of the Fan District's small parks -- a welcoming place for a peaceful respite. Meanwhile, after July 1, 2021, it's bye bye, Byrd.

Byrd image from the Roanoke Times