My final Prediction is that the electoral vote will be 347-191. 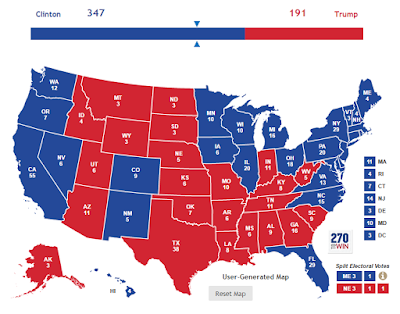 Okay, okay, before you dismiss this map as just reflecting my own biases of what I think should happen, note that I did not give AZ or GA to Clinton, nor did I have McMullin win UT (all three of which I really do wish would happen). My methodology in making this map is pretty simple. For all but one of the states that people call swingers (AZ, CO, FL, GA, IA, MI, NC, NH, NV, OH, see below re: PA), I pulled up a chart of the polling overages/electoral prediction over the past few months or so. If Clinton was ahead most of the time (even if she is not right now), I gave it to her. If Trump was ahead most of the time (even if he is not right now), I gave it to him. The philosophy behind that is my sense that there are no real swing voters in this election and that everyone really made up their minds months ago. Poll fluctuations are just more about how much people have been embarrassed to give their real answer to pollsters given whatever the news of the day happened to be while the poll was being taken.

Except I didn't really follow that methodology for PA (even though I'm pretty sure if I had checked the polling/election prediction history for the state, it would come out the same). I think I have a better sense of my home state and I just don't buy the claim that PA swings at all. It has been a blue state in every presidential election, since the 1980s. It doesn't make sense to me why everyone insists it is a swinger every presidential year despite over a quarter century of blueness. (Contrast Louisiana, which everyone thinks of as a reliably red state, was blue in both 1992 and 1996)

I still really do hope that UT goes with McMillin. I even went so far as to make a prior draft of this map with a 347-185-6 split and with UT colored yellow. But eventually I recognized that map is mostly wishful thinking on my part. Of course, my adding this paragraph, I am implicitly reserving the right to post "I told you so" in case McMillin does pull it off in UT and the rest of my map is correct.

Anyway, you can create your own here, or on a bunch of other sites. I liked 270 to Win's map because it gave the option for a third color (if McMillin, or someone else took a state), and it lets you do a split electoral vote for ME and NE, even though I ultimately did not use any of those features for my map.

ADDENDUM: Does anyone know why, when I look at this post from the mobile version of my site, the map imagine is squished down like someone stomped on it? You can see the whole (unsquished) map if you click on it, but it doesn't display in any readable form along with the rest of the post. Meanwhile, it looks fine on the desktop site. What's the deal and how do I fix it?