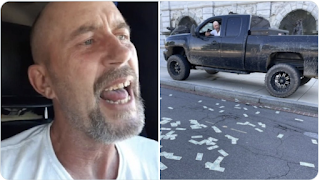 A man with a history of supporting former President Donald Trump and who has said "all Democrats need to step down" was arrested Thursday after an hours-long standoff near the US Capitol during which he claimed to have an explosive device.

Police have identified the suspect as 49-year-old Floyd Ray Roseberry of Grover, North Carolina. The incident prompted multiple buildings in the area to be evacuated Thursday as authorities responded to an "active bomb threat investigation," the US Capitol Police wrote on Twitter.

This is how you bring anti-government, crackpot views to the mainstream in this country:

In video posted Thursday, Roseberry called himself a "patriot." He said he doesn't care if Trump ever becomes president again but also that he thinks "all Democrats need to step down."

Roseberry's son, Christopher Roseberry, told CNN on Thursday that he didn't fully understand what motivated the actions of his father and that he didn't know about his plans to go to Washington.

"He was home last night and I guess my stepmom woke up this morning and he was gone," Christopher Roseberry told CNN. "It was just a normal day, but it's not."

Christopher Roseberry said his father expressed political frustrations with him after the November election. "Since Biden got elected he's just been like, man ... he doesn't like change, I reckon. ... I tried to tell him ... 'Who cares what goes on up there in DC? Worry about what you've got down here.' I tried to tell him that and he's like, 'No, I'm sticking up for my country. We need to get the country back to the way it was,'" he said.

He said his father did not mention violence though, adding, "He just said, 'I want to make a change.'"

Well, shucks, he's just regular ol' folks and he was just trying to get his point across. He wants to make a "change."

That change is the reversal of a decision the voters made last fall. And I don't think it's possible to harp on this enough--calling for the destruction of the Biden Administration is anti-democratic if your only reason for doing so is that all those people of color surely can't have their votes count as much as white people, right?

All President Biden has done is try to save American lives, get us out of a war, and deal with the economic and social issues brought on by the pandemic. He's fought for working Americans and the poor. He's busted his ass to fix a broken nation. You may not like the results but that doesn't mean you can drive a vehicle-born IED into the middle of Capitol Hill and claim to be a Patriot as you terrorize an American city.

We're normalizing this sort of thing by letting his family talk about how he's just regular folk with normal views on things. He's not. He's a domestic terrorist. He has attempted to use terrorism to agitate for a change in the United States government and to effect political change. He will probably inspire others to do the same. And we act like this isn't a holy shit, we gotta do something moment?

Wow. Are we that shellshocked and numb? This is the result of four years of batshit Trumpery, isn't it?

First of all, like I said, this man staged a wannabe domestic terror assault on several buildings in and around the Capitol, the Library of Congress, and the United States Supreme Court. He claimed to have a bomb in his vehicle which, ironically, is what killed numerous Americans in Iraq and Afghanistan. Some patriot! And he cited Afghanistan in his ranting and raving. Way to go, dumbass.
Second of all, he's manifestly not any kind of what could be called a patriot. This is the opposite of that. His reprehensible actions and views are those of a person with severe mental illness and an inability to function in polite society. The fact that this is mainstream Republican orthodoxy (Hello, Representative Mo Brooks!) is terrifying.
Third, it was Trump, Trump's lies, and Trump's ideology that radicalized this man. It gave him the green light to do what he did (which, thankfully, did not result in anyone getting hurt) and we have seen this again and again. We're seeing rank and file Republicans adopt this rhetoric (Hey Mo!) and use it to raise money.
When will the Justice Department, the Department of Homeland Security, and the rest of the Federal Government wake up and do something about the people who are radicalizing Americans and making them do this crazy shit? At least cut off the fundraising and the money grab!
There is a direct correlation, expressed here in this man's words and actions, which goes from the former President to domestic terror incidents like this one. A direct fucking line, and it carries with it media exposure and cash they can shove in their pants. This is a clear and present danger to public safety. Yes, I've read the stories about the agencies and their "concerns" and their "warnings" about white supremacists and pro-Trump acts of terror, but when is someone going to do something about the orange asshole inciting this behavior every single day? When is someone going to go after the Trump enablers getting rich off of lying to the people who eat this up?
If today didn't wake someone up, I guess it will take dead bodies to do so. I mean, what the hell?