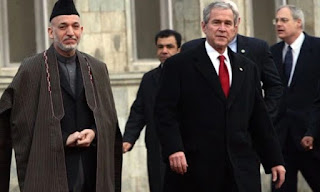 The inevitable has begun to happen and Pakistan is now supporting the Taliban's effort to take over Afghanistan. This is an outcome that was decided decades ago but delayed because the United States failed to anticipate the costs of Nation building.

It was George W. Bush who got us into this war and his recent criticisms of President Joe Biden should be ignored. Anyone ready to blame Biden for the results of our misadventure has conveniently forgotten the fatal mistakes that were made several administrations ago:

Bush [in April 2002] said that “We know that true peace will only be achieved when we give the Afghan people the means to achieve their own aspirations. Peace will be achieved by helping Afghanistan develop its own stable government.” In his memoir, one chapter of which is devoted to Afghanistan, Bush writes that “Afghanistan was the ultimate nation building mission. We had liberated the country from a primitive dictatorship, and we had a moral obligation to leave behind something better. We also had a strategic interest in helping the Afghan people build a free society,” because “a democratic Afghanistan would be a hopeful alternative to the vision of the extremists.”

Observers, including me, have almost unanimously taken Bush to task for failing to match his lofty rhetoric with the programs, policies, and budgets to implement them. Bush, to his credit, admits as much in his memoir. “The task turned out to be even more daunting than I anticipated,” he writes. Part of the difficulty lay simply in the massive complexity of the task. “Democracy is a journey that requires a nation to build governing institutions such as courts of law, security forces, an education system, a free press, and a vibrant civil society.” It is tempting to say that this should not have been a surprise to an Administration whose National Security Advisor had a PhD in Political Science, but the truth is that academics and practitioners have been captivated by a simplistic and naïve notion of how poor, oppressive countries become rich, free ones for decades-from the “modernization theory” of the 1950s to the “Washington Consensus” of the 1990s.

But another part of the problem lay in the capacity of the U.S. government. “Our government was not prepared for nation building,” Bush writes, which is absolutely true. Even if Bush had directed the Departments of State and Defense to mount a massive nation building campaign right after the fall of the Taliban, it isn’t clear to me that they would have known how. To its credit, the Bush Administration took steps in later years to increase the government’s ability to fix failed states. It established the State Department’s Office of the Coordinator for Reconstruction and Stabilization (CRS) in 2004. The next year the Department of Defense issued Directive 3000.5 making stability operations a core military mission. And the White House issued National Security Presidential Directive 44, updating the Clinton administration’s guidance on interagency efforts in reconstruction and stabilization missions.

The lesson of Afghanistan, it seems Bush is saying, is not that democratic nation building is an impossible fool’s errand. Bush is (rightly, in my view) unrepentant about his decision to “help the Afghan people build a free society,” and make democracy a key war aim. Rather, the lesson is that nation building and fostering democracy are worth getting right, but that they are incredibly difficult and require far more time, patience, and effort than the bureaucracies are accustomed to spend on any single foreign policy initiative. If anything, Bush is contrite for not working hard enough to rebuild Afghanistan. All in all, this amounts to a surprisingly fair assessment of the Bush Administration’s record on Afghanistan and on the lessons to be drawn from the successes and failures.

There was no avoiding the outcome. President Barack Obama was tricked into sending more troops by the generals and President Trump was far too incompetent and surrounded by far too many grifters to make any kind of coherent foreign policy decision. The one person who has gotten it right is President Biden and we should be grateful for that.

When all the troops come home, there might be a parade but there is no credit given to a president for the ones who aren't killed in action in a war that was avoided. No one is going to give Biden credit for the empty beds in the hospital. No one is going to praise him for not deploying a brigade of troops to a theater of war that has crushed and destroyed the readiness and morale of countless organizations. There's no credit given to a leader who doesn't spend a trillion dollars propping up a failed state on the other side of the world. No one is going to look at the 2025 Defense Budget and give Biden credit for money that wasn't wasted putting off the inevitable destruction of Afghanistan's dream of being a Western Democracy. News flash, that was never going to happen anyway. It wasn't going to happen in Iraq, either.

Pakistan is responsible for what's happening. There wouldn't be a Taliban were it not for the fact that Pakistan is able, with a straight face, to prop them up, arm them, finance them and shelter them and then still claim to be an "ally" of the United States.

Saudi Arabia lit the match and exported their corrosive form of Islamic fundamentalism in order to create an enemy on the other side of Iran. We will never get a handle on terrorism until we deal with the fact that the majority of it is exported by the fundamentalists that are placated by the Saudi Arabian regime. They were given four years of free reign by Trump and his goddamned son-in-law and we're going to pay the price for that decision for the next twenty years, at least.

The big picture here is that Americans aren't dying in the struggle between larger forces in the Sunni-Shia world. We're actually inviting the Chinese to step into the burning sandbox and see what they can do with their own blood and treasure. If you think their outcome is going to involve several Manchurian armored divisions being welcomed as liberators in Kandahar, I wish you well.

This post first appeared on 400 Bad Request, please read the originial post: here
People also like
World’s Largest Airplane in Line to Launch Space Vehicles
National Doctor’s Day
Fun Facts About Italy: Interesting Things You May Not Know
“The Friend Who May Not Seem a Friend” – The Cat and the Fire, Post 2 of 3
Office Life – Preview – 3
How Do You Get Bed Bugs?
Going Bark: A Furry’s Guide to End-to-End Encryption