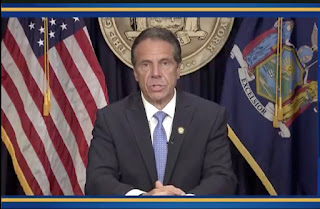 And he resigned. Amazing.
I thought he was going to fight until impeached and removed, but he resigned.
Oh well, here's what I wrote earlier:

It is absolutely clear from today's "statement" from New York Governor Andrew Cuomo that he is going to attempt to destroy the credibility of his accusers and do so in a way that is reprehensible and irresponsible. Cuomo is going to burn down everything in order to save his skin. He is scum and he needs to go.

Cuomo began today by minimizing the accusations against him in a folksy, familiar manner. He claims he was just a guy being endearing to the ladies, making compliments and giving harmless kisses. We know that the Women who have accused him have made allegations that rise to the level of sexual assault. Well, Cuomo sees it differently and aren't you a jerk for thinking otherwise. He is an immediate threat to the safety of every woman he comes into contact with and is acting like a sexual predator. Why he isn't already in handcuffs is impossible to understand.

He is claiming that he is being denied due process. He is attacking the people who vetted the claims against him because they have credibility. This is a perversion of due process because he's already been afforded the chance to clear his name and he knew he couldn't do that.

Credible people have already spoken and there is sufficient evidence to conclude he assaulted the women who came forward. Cuomo has thrown sand in the gears to stop their work. That's the real issue here.

What he has done to the women who have come into contact with him is criminal. It is a case study in victim shaming, abuse of power, and a violation of the public trust. And yet, he hides behind the veneer of elected Office to shield himself from accountability. There is no way Cuomo remaining in this position can or should continue. He should be driven from office. He should be prosecuted and held accountable. Cuomo claims that what is happening goes against "the law." The only law he understands is that being governor gives him the right to use his hands to sexually assault women. I have to add, he should be able to defend himself, have the presumption of innocence, and have the opportunity to clear his name. That cannot happen while he uses his office and power to smear his accusers. The whole system is out of whack if that is allowed to happen.

Cuomo's abuse of power in office is an affront to everyone who believes in democracy. It's disgusting. It goes beyond anyone's ability to understand why we have a system that allows this. I am not a New Yorker but I have to believe that there is an anger level there that is rising every day he continues this effort to hold onto political power.

This is a direct threat to the Democratic Party. It's an affront to decency. And, above all else, it's a second attempt at victimizing the women who came forward to accuse him. Cuomo cares about only himself. He will continue with these relentless attacks until he is assured that he can survive to the end of his third term in office. He is delusional if he thinks he can get re-elected. In fact, if he does get re-elected, the Democratic Party might as well give up trying to appeal to women.

Cuomo is a disgrace. He should have already resigned. Instead, he's going to scorch the Earth and try to hold onto power in the most Trumpian way possible.

This post first appeared on 400 Bad Request, please read the originial post: here
People also like
Building a Talent Pool in a Tight Market
Lustre ajustable Chrome Aire 16L Mantra
18+ Adult Movies Of All Time To Fulfill All Your Sexual Fantasies| Lolita, Exotica and More
7 Reasons Why You Should Hire A Female Divorce Attorney