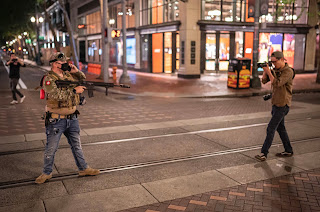 For context, this is a photograph taken in Portland, Oregon over the weekend. It features reporters and bystanders in proximity to a person dressed up in the costume of a cosplay warrior holding a black rifle that is readily pointed at a human being who poses no threat to him. His finger is curled towards the trigger. It is not straight out and lined up next to the trigger guard.

This is fucking unacceptable.

Very likely, the media ignored this and similar confrontations and did not provide any coverage because there wasn't a mass slaughter of human beings to trigger instant attention to the matter. Violent confrontations are part of a longstanding confrontation that has been happening between right wing agitators and so-called Antifa counter-protesters. It has been a violent time in Portland and there is no indication that local law enforcement has any kind of workable plan to de-escalate things and deal with the obvious issues depicted above. The right to protest has run into a systemic focus on skirting the law in order to act like a jackass in public.

No one should be walking around in camouflage, hate group shoulder patches, and tactical gear with a long rifle in the downtown area of an American city or town. You should not be able to see this anywhere. And that goes for the over-militarized police officers as well. This is a failure of our culture and of basic common sense. It's an affront to public safety to have people exercising their 2nd Amendment rights like this specifically because the person depicted above has gotten away with menacing a person with his assault rifle. We should have evolved as a society into one where people can protest or counterprotest freely without resorting to gunplay and waving loaded rifles at one another. Instead, we're living in a world where this isn't even considered newsworthy.

The politicians who are ignoring the real threats here are the ones to blame. I don't care to get into the specifics in Portland or Oregon itself because that's outside of my expertise. But the failure is apparent. This is what's going on downtown? What the ever-loving fuck?

Until we get a handle on the gun part of this, nothing else matters. I get that what's happening is complex but the solution is right before our eyes. Seeing the failure of leadership and decency in one photo that goes by in an instant is rare and should be called out when it appears.