Corrupt or Just a Fool? 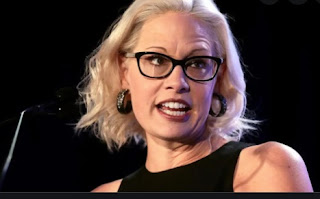 Everyone likes to pile on Joe Manchin for being the Republican Party's favorite Democrat, but I would submit to you that Senator Kyrsten Sinema is the real traitor to the cause of responsible governance in this country:

While the bipartisan group had a breakthrough on Wednesday, some progressives on the left criticized it after Sinema announced she would not support another, much larger, $3.5 trillion bill at that massive top-line figure. The other, Democratic bill is another crucial part of Biden's legislative agenda; it would fund climate initiatives, universal prekindergarten and community colleges, expand paid family and medical leave and the child tax credit, and add dental, vision and hearing benefits to Medicare, among many other proposals.

There are red state Democratic Senators who are going to struggle next year to get re-elected. We've seen the heartbreaking loss of good people like Doug Jones in Alabama. And so, I get that there are politicians who have to straddle the line and make heavy compromises to hold onto their seats.
With Sinema, what the hell is she thinking?
I don't know how actively opposing the expansion of Voting Rights helps her. It hurts her because it means Arizonans who would normally vote for her will face active measures to keep them from casting their ballots for her when she comes up for re-election. The expansion of voting rights should be a no-brainer for anyone with a D next to their name.
And I certainly don't get how opposing a massive infrastructure Bill helps her, either. Joe Biden is a massively popular president who is working to put the country on the right path. If he succeeds, someone like Sinema reaps the rewards. I have to believe she will flip her vote when someone gives her what she wants, if only because opposing Biden's agenda is, in fact, the Trump/McConnell/McCarthy agenda. How do you win with those three losers on your side?
Sinema is likely looking at a vicious primary battle. Her millions won't help her if she's under water with her own constituents and unpopular back home. Maybe she's looking to cash out, set up shop as a lobbyist, and live the good life in Washington D.C. Maybe she's corrupt and wants to get paid to vote in the best interests of the people she's supposed to represent.
Or. maybe. Just maybe. She's an incompetent fool who is badly misjudging the political climate.

Corrupt or Just a Fool?