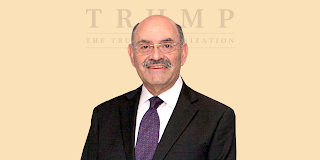 The hype that surrounds the indictment of Allen Weisselberg and "the Trump Organization" has dominated the news for most of the day. Essentially, it amounts to an allegation that Trump paid people off the books to avoid taxes. And, because he's cheap, his accountant only got around $1.5 million in perks.

This is supposed to be a big deal? Come on.

I'm going to take a contrarian view that sees this as a massive misdirection. I'm probably wrong, of course. But, I think the fix has been in for a while. Cy Vance and the State of New York don't want to deal with Trump anymore. They'll make noise about accountability and then they'll see the back of the entire clan real soon. The Trump brand is dead and his properties will sell cheap. There will be fines and long, drawn out trials. Plea deals, light jail time, and slaps on the wrist all around.

Here's why I think this.

The Trump Organization was a sophisticated Money laundering vehicle for the Russian mob. This has been documented again and again. It said fuck you to the tax man and raked in hundreds of millions of dollars in ridiculous, bloated real estate and branding deals. Trump would buy something, inflate the price, deflate the price, sell it to foreigners, and launder massive amounts of money. All done in the last thirty years under the noses of the most incompetent oversight apparatus imaginable, all out in the open, and where reporters could tell you about it again and again.

Trump being a free man all of his life is proof of that. He should have been put in prison with all the rest of the clowns who went belly up in the 80s. He should have been in prison after his casinos failed. He should have gone to prison before the year 2000. He has been corrupt, mobbed up scum his whole life. The only logical explanation is that someone was taking money to look the other way. I mean, he's just not smart enough to get away with anything. That much we know for certain.

If someone like Cy Vance were to actually throw open the books and go after Trump, it would start with arresting any foreign entity on U.S. soil who made an advantageous real estate purchase from Trump in excess of tens of millions of dollars. It would then roll out like a tax evasion and money laundering prosecution, one likely to involve numerous State and Federal agencies who did nothing to stop it when it was happening in plain sight. Not this penny ante bullshit with Weisselberg who is never going to flip and is never, ever going to reveal the real books or the real deals that were made.

Don't forget, Trump Senior was the most corrupt of them all. He created the system that Weisselberg ran under Donald for many, many years. Given Trump's volatile, insane management style, the only way someone like Weisselberg holds onto a position like that and wrings a little cash out of President Brokedick Tightwad is by having categorial evidence that could throw everyone under the jail in five minutes flat. Trump himself was just the inept failson who made two sons and a daughter just like him on his way to being the worst president in American history. These are not "businessmen." These are the idiots gangsters use to launder money.

Weisselberg getting a Mercedes off the books is nothing. Weisselberg testifying as to how a Russian oligarch laundered several hundred million dollars through phony real estate transactions? That's the real prize. Where's that indictment?

That's why I ignore people like Michael Cohen and whoever else wants to be "rehabilitated." They were all part of a machine that made money that was protected from accountability by way of corruption. I'm probably wrong, but we're being fooled again. No one is going to save us and nothing is going to stop the people who want Trump back in power. It's all bullshit until the real crimes are exposed and until Trump himself is locked up.