If This Continues, You Won't Recognize This Country 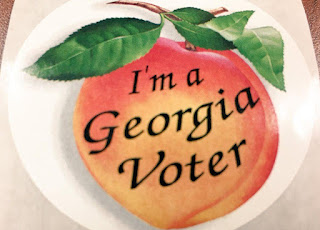 What is this horseshit?

More than 100,000 names will be removed from Georgia’s voter registration rolls in an attempt to keep the state’s voter files “up to date,” Georgia’s secretary of state announced Friday.“Making sure Georgia’s voter rolls are up to date is key to ensuring the integrity of our elections,”

Republican Brad Raffensperger said in a statement. “There is no legitimate reason to keep ineligible voters on the rolls.”

The voter files being removed are “obsolete and outdated,” according to the statement, which says that since the 2020 election, Raffensperger has “made it a priority to continue with the list maintenance process.”

There. Is. No. Evidence. of. Any. Voter. Fraud. Whatsoever. In. Georgia. Or. the. Rest. of. the. Goddamned. Country.
None.
Voter fraud is a myth.
It exists as perhaps--perhaps--one millionth of one percent of all votes cast, if even that. Voter fraud is so non-existent as to constitute less of a threat than lighting striking your genitals and making your nose glow for a year.
When Georgia undertakes a massive effort to disenfranchise large numbers of people, it means that they don't want any more people of color to vote. They want Republicans to remain in power forever. That's all it means. A dwindling handful of unimaginative, incompetent pieces of shit want to keep their government jobs for the rest of their lives.
And, get this. They don't even like the government. They hate having to deal with you because you're a pain in the ass, even when you bother to vote for them.
I'll never understand it. You can't just hope Stacey Abrams solves all the problems in the world. You better hope people step up and throw these GOP assholes out of office, and soon.

If This Continues, You Won't Recognize This Country