If you’re wondering what the Texas Legislature did to help prevent dangerous and persistent fires in the petrochemical corridor near Houston this year, the answer – unfortunately – is not much.

Ally Venable Releases New Video “Hate…
Predicting Roulette
NASW Foundation Partners with Univers…
Hiking the Cinque Terre: All you Need…
10 of the best pubs in Wales with out…

Lawmakers did hold a couple of hearings to take testimony about the fires in early April, but they have failed to take any significant direct action to address underlying causes of the danger. This is despite the fact that frightening, and in one case deadly, evidence of a systemic problem in the Houston area flared up in March and April.

To recap: On March 16, a fire ignited at the ExxonMobil Refinery in Baytown, Texas, concerning the local community. A day later, another fire broke out at the Intercontinental Terminal facility near Deer Park. This blaze raged for days, casting a massive plume of toxic smoke over the region and forcing school children to shelter in place. Traffic in the Houston Ship Channel halted for nearly a week, causing an estimated $1 billion in economic losses.

Less than two weeks later, on April 2, a chemical tank at the KMCO plant in Crosby ignited, once again sending a toxic plume of smoke into the air. This time the fire proved fatal; one KMCO plant worker died and 10 others were injured. One might think three chemical fires in two weeks would prompt urgent bipartisan action by the Texas legislature, but that is not the case. 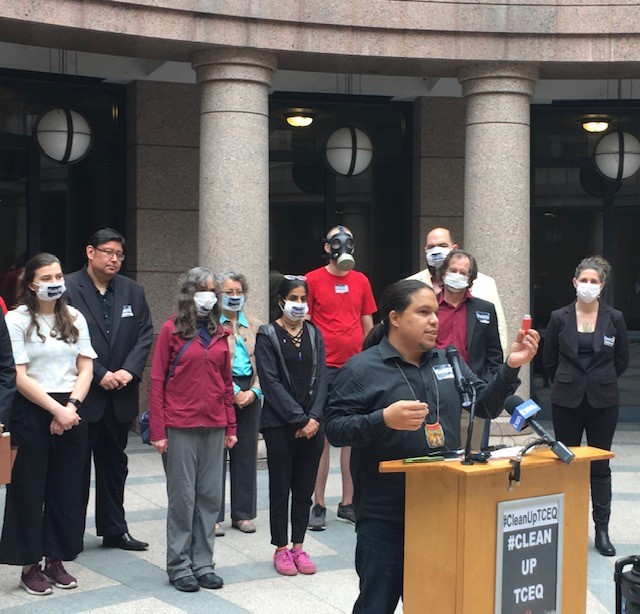 The Legislature did hold two hearings – one on April 4 and another on April 5 – to hear from state and local environmental officials, but not affected members of the public. Because Houston residents were not invited to testify at the April 5 hearing, Public Citizen, Air Alliance Houston and numerous community activists staged a press conference at the Texas Capitol on the same day. The event received significant media attention statewide, ensuring that community voices were heard.

During both hearings, Toby Baker, the executive director of the Texas Commission on Environmental Quality, admitted that his agency lacks the authority to regulate above-ground petroleum storage tanks. Environmental advocates were already supporting SB 1446, a bill by Senator Nathan Johnson of Dallas, that would grant TCEQ the authority to develop best practices for these tanks. Before these disasters, SB 1446 was dead on arrival. Once it became apparent that TCEQ needed authority over storage tanks, advocates began pushing for a hearing on the bill.

After considerable pressure was applied to the Senate Water and Rural Affairs Committee and its chairman Senator Charles Perry, the bill finally got a hearing on April 29. Although this hearing did not lead to the bill’s passage out of committee, Chairman Perry stated repeatedly that an interim charge – or special legislative action post-session – is needed on the issue of above ground storage tanks. This commitment would not have happened without our advocacy on the issue.