If history is any guide, here is how it will happen. There will be some kind of incident, maybe a terrorist attack here or abroad, maybe some act of urban violence. Just as happened after 9/11, this incident will be used to justify the imposition of emergency powers: Restrictions on civil liberties, restrictions on press freedoms or use of the internet, expanded surveillance of Americans, stricter immigration controls; unfettered arrest and detention. Donald Trump has already expressed support for curtailing freedom of the press, and shutting down parts of the internet. He has already called for "registering" Muslims and curtailing their entrance into this country; for torturing prisoners; for tearing up treaties. If he follows through, we are on the road to a different form of government.

We could always hope that Trump won't actually implement these proposals. Maybe his bark during the campaign was worse than his bite. Maybe, as many have said, he doesn't really want this job, didn't expect to get it, and will just enjoy being president the way a reality show contestant enjoys winning the contest, without showing much interest in actually governing the country. I would not count on this outcome. The reality of power is too intoxicating. Given the opportunity, few shy away from exercising it, especially if they are as enamored of themselves as Donald Trump appears to be. We should therefore fully expect that Trump will try to do most of the things that he has repeatedly promised he will do. As I am suggesting, Trump may wait for a suitable pretext to get public opinion on his side before implementing some of his more dangerous ideas, and by that time it may be too late for the political system to resist.

The government's expanded powers might not seem unacceptable at first. Most people will probably support them. We will get used to showing our papers and alerting the authorities to suspicious behavior. And mass protests probably won't be effective in preventing these expansions of executive power; instead protests will probably be used to justify even more curtailment of freedoms.

Unlike the expansion of police powers that we allowed after 9/11, when the government paid some attention to avoiding profiling, and President Bush went out of his way to assure Americans that Muslims were not being targeted, I would not expect the same degree of care in the next expansion of power. Candidate Trump has already been explicit about his desire to engage in profiling and targeting of various minority groups.

I would also expect that crackdowns against allegedly dangerous elements in the country will start to take on a more political cast, and that Trump will not hesitate to paint his political opponents as terrorist sympathizers, or coddlers of disparaged groups, thus making opposition seem illegitimate.

Given the prospect that a more authoritarian form of government will emerge from a Trump administration, and that by the time it happens, it will be too late to resist, it is understandable that demonstrations and other forms of resistance are already occurring only a few days after the election. My fear is that these demonstrations may end up being counter-productive. First because it is offensive to our electoral process to protest the results of a fair election. Second because demonstrations will themselves be used as a justification for new security measures in the name of law and order.

If mass protests won't protect us from the gradual accumulation of executive power, the expansion of legalized discrimination, and increased restrictions on freedom of expression, what will? I draw some comfort from my faith in the federal judiciary, and our country's strong commitment to the rule of law. Donald Trump can be expected to press the courts to recognize expanded executive powers. In keeping with past behavior, he may try to intimidate judges at all levels. He is no stranger to litigation, and would probably relish a fight in that forum. We have to have some confidence that the third branch of government will rein in any excesses, as it was designed to do. People are worried about who the next president will appoint to the Supreme Court. It's an important issue, but even more important is whether judges of integrity, whether a John Roberts or a Sonia Sotomayor, remain free to halt unlawful expansions of governmental power, and whether their orders are respected.

Mamy of the concerns being expressed about the next administration revolve around policy issues: health care, women's rights, environmental regulation, education, etc. Of course these issues are important, but we have to respect the right of those who win elections to affect policy. And we ought to work together with political adversaries to find common ground. To focus only on policy issues, however, is to treat this election as a normal transfer of power from one party to the other, and perhaps to lose sight of serious looming threats to the rule of law, to our democratic process, and to the protection of Constitutional rights and liberties. These are the values that define our nation, and that we must protect vigilantly above all else. 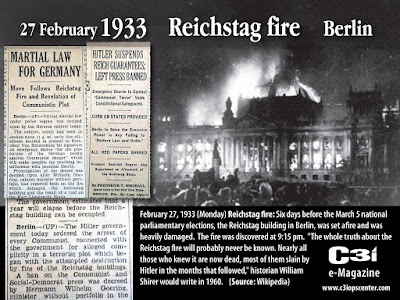