Listen to James Hawes on the history of Germany 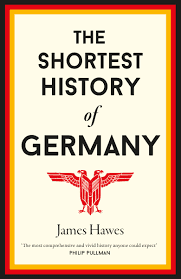 James Hawes is one of my favourite contemporary novelists. His Speak for England, as well as being hugely enjoyable in its own right, can claim to have anticipated Brexit.

He is also a historian. I can recommend his The Shortest History of Germany - and not only because it does what is says on the dustwrapper.

The unified Germany of the late 19th and early 20th centuries, he argues, was largely the result of conquest by Prussia. And Prussia was a military state with a  very different outlook from the emerging democracies of Western Europe.

It was Germany's - and Europe's - tragedy that the new nation took on the semi-colonial practices of Prussia.

You can hear Hawes discussing the history of Germany in a podcast with Dan Snow.

Listen to James Hawes on the history of Germany