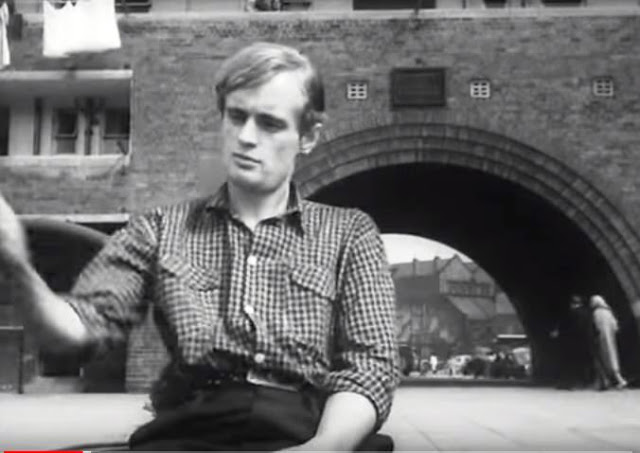 Talking Pictures has just shown a film I have long wanted to see: Violent Playground from 1958.

Tipping My Fedora describes its genesis:

This story of juvenile delinquency in 1950s Liverpool was one of a series of topical dramas made by director Basil Dearden and producer Michael Relph from subjects ripped from the headlines.

Since the 1940s they had alternated more commercial fare (including comedy vehicles for Peter Sellers and Benny Hill) with these properties that took on socially relevant themes with a (fairly) progressive outlook, shooting on location for a more realistic style.

The best thing about Violent Playground is its star David McCallum, who went on to greater fame in The Man from U.N.C.L.E. and other television series.

He is charismatic and dangerous. So dangerous that he ends up holding a school class at gunpoint. It was a surprise to see it on screen today and must have been shocking in 1958, even though the makers seem to have lost their nerve as two characters who might have died are both restored to health at the end.

The trouble is that the alternative presented to the delinquent lifestyle is so insipid. Athletics club with the headmaster after school just doesn't cut it.

Stanley Baker excelled as both criminals and tough cops in films of this era, but here is just made to look dull.

Besides McCallum the other great pleasure of the film are the Liverpool locations. It is a city that cannot take a bad photograph.

But not all is as it seems, as Getintothis explains:

All interior shots in the film were taken at Pinewood studios as were much of the exteriors but there are key Liverpool locations running throughout. As with many Liverpool movies, including Letter to Brezhnev (1985) and Waterfront (1950) the opening titles feature the iconic Mersey and the Liver buildings before the action moves further inland.

Shots of typically working class kids playing around terraces and tenements dominate the sequence that culminates in a shot of the almost completed Anglican Cathedral towering over a bombsite.Truman’s investigations into small time theft by the local nippers puts him back on the trail of the firefly arsonist, the case we see him relieved of at the start of the film. His investigations take him to Gerard Gardens, home of Johnny Murphy played by David McCallum,

It is disappointing that so many of the key locations are actually shot in London, including the school despite the name Scotland Road School above the entrance.

There are still enough Liverpool locations to spot however; in a sequence where Johnny leaps from a hotel window, the action takes place on School Lane. The window is on the first floor at the back of what is now Primark, facing the Bluecoat and has not changed. You can clearly see down School Lane towards what is now Liverpool One.

Gerard Gardens was the not the hatching ground for delinquency the film makes it seem. When it was built in the 1930s it was distinctly superior council accommodation and its residents fought a long rearguard battle before it was demolished in 1987.

Other pleasures in the film include John Slater as a police sergeant, foreshadowing his role as Sgt Stone in Z-Cars a few years later. Stratford Johns is also supposed to have a minor role in the film, but I failed to spot him.

And among McCallum's gang you will find Melvyn Hayes and a boy called Fred Fowell. After a spell in a minor Merseybeat band he emerged in the 1970s as the comedian Freddie Starr.

If you want to see Violent Playground then keep an eye on the Talking Pictures schedules. And - who knows? - you may even find the whole thing on Youtube.