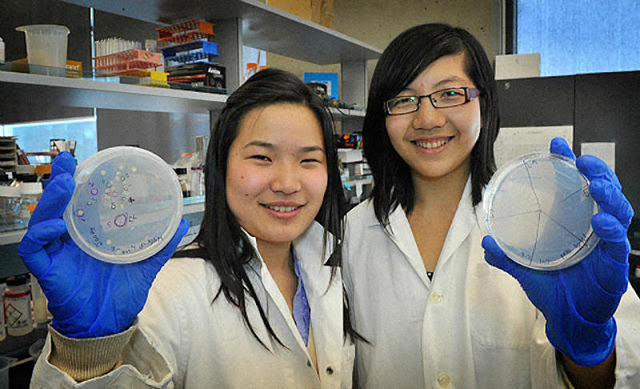 "Students Invent Bacteria That Eat Plastic From The Oceans And Turn It Into Water" Physics-Astronomy.org 9/25/2019

The high pollution in the oceans is a big problem on the planet.  According to recent research, it is likely that in the year 2050 we will find more Plastic than fish in the waters of the seas, and for this reason there are many people working to generate solutions to this problem, some very imaginative to reverse this situation.

Currently the novelty is a bacterium , developed by students Jeanny Yao and Miranda Wang , who have been developing this project since their school years and today reap the fruits of it.  They already have patents and have obtained a financing of 400 thousand dollars to start developing the product.  All this with only 20 years old.

They have already won 5 prizes thanks to this project, they became popular as they were the youngest to win the Perlman science prize.  All thanks to its tiny Bacteria capable of transforming plastic into CO2 and water.  The technology is used in two ways: To clean the beaches and also to produce raw materials for clothing.

"It is practically impossible to make people stop using plastic, we need technology to break the material, and everything becomes biodegradable, " says Miranda Wang.

The development of this technology is divided into two parts: First the plastic is dissolved and the enzymes as catalyze whereby the plastic becomes highly malleable fractions.  These components are placed in a biodigester station , where they behave as if they were leftovers of food.  The project runs in just 24 hours, to move from plastic to water, really promising.

This post first appeared on Mage Soapbox, please read the originial post: here
People also like
NBA Jam Game Comparison
30 Epic 50s Hairstyles for Men That Are Popular Again
What do the Great Commission and plastics have in common?
5 Tips for Successful HR Project Management
Police Arrest Man After He Allegedly Buried His Mother And Sister In The Backyard And Continued To Cash Social Security Checks
eBay – Up to 40% discount on Gucci Accessories
Top 10 Highest-Paid Crypto Jobs in 2022