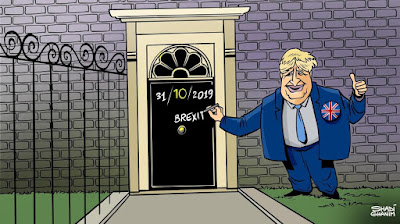 SUMMARY:  In the United Kingdom, the countdown to Brexit is on, and Parliament is out.  Prime Minister Boris Johnson moved Wednesday to suspend Parliament, sparking criticism that he is seeking to prevent lawmakers from debating a deal to leave the European Union, which is scheduled to happen by October 31.  Lisa Desjardins talks to Robin Niblett of Chatham House for analysis of the tense situation.

"For Brexit protesters, a larger issue is at stake: democracy" PBS NewsHour 8/31/2019

SUMMARY:  Thousands of people took to the streets across major British cities, including London, to protest the suspension of the Parliament by Prime Minister Boris Johnson ahead of the October 31 Brexit deadline.  Frank Langfitt, NPR correspondent and author of “The Shanghai Free Taxi: Journeys with the Hustlers and Rebels of the New China," joins Hari Sreenivasan to discuss the situation in the U.K.