HINT:  This is just another anti-Obama move.

Department of Interior Secretary Ryan Zinke claimed the Navajo people who “live close” to Bears Ears National Monument “were all in support” of President Donald Trump’s decision to shrink the protected land.  But tribe representatives told us that’s false.

In fact, the Navajo Nation and other indigenous tribes have sued the federal government over the President’s decision.

National monuments “are areas reserved by the National Government because they contain objects of historic, prehistoric, or scientific interest,” explains the National Park Service.  This is different from a national park, which is designated because it has “some outstanding scenic feature or natural phenomena,” NPS adds.

In December 2016, President Barack Obama created the Bears Ears National Monument, declaring 1.35 million acres in Southeast Utah protected under the Antiquities Act of 1906.  About a year later, Trump split the monument into two units — the Shash Jaa’ unit and the Indian Creek unit.  Together, they make up about 201,876 acres, which is over 6.5 times smaller than Obama’s designation.

Zinke made his claim on the radio program “Breitbart News Daily” in an interview with Breitbart’s editor in chief, Alex Marlow (at about the 8:20 mark).  He pointed specifically to the Shash Jaa’ unit, which is closer to the Navajo reservation.

Zinke, May 28:  The Navajo tribes that actually live close to Bears Ears, now the Shash Jaa’, were all in support of the President’s action.

When we contacted the Interior Department for support for Zinke’s claim, spokeswoman Heather Swift clarified that Zinke was speaking specifically about the “Utah Navajo.”

But James Adakai, the President of Oljato Navajo Chapter in Utah, told us via email that Zinke’s claim is “totally incorrect and misleading.”  He explained that there are seven chapters with a good chuck of their territory in the state — Oljato, Navajo Mountain, Aneth, Dennehotso, Mexican Water, Red Mesa and Teec Nos Pos.  Out of those seven chapters, six “supported President Obama’s Bears Ears Proclamation for 1.35 million acres,” he said, with the Aneth Chapter being the only one that originally didn’t.

Adakai added that the Navajo Utah Commission, which consists of the seven elected Utah Navajo chapter Presidents and council members of those chapters, sent Zinke a request to “uphold the Bears Ears National Monument Designation” in May 2017.

Gavin Noyes, the executive director of Utah Diné Bikéyah, a nonprofit that helps indigenous communities protect their lands, similarly told us that Zinke’s claim is “false.” 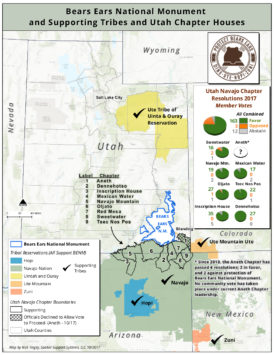 Noyes sent us a map (see above) that shows the territories of the Navajo chapters in Utah.  It shows that in 2017, 163 members of the tribe voted in favor of the monument, while three opposed it and 12 abstained.  This includes members of two additional Navajo chapters — the Inscription House and Sweetwater chapters — that border or have a minority of their territory in Utah.

The Aneth Chapter didn’t hold a vote at all, as the map shows.  “The Aneth Chapter refused to allow a vote to proceed (perhaps because its citizens and Chapter President now support the Obama monument),” said Noyes.  Adakai confirmed this was the case.

However, Alastair Bitsóí, the communications director for the Utah Diné Bikéyah, clarified over the phone that the majority of the Navajo who live within these chapters’ territories didn’t vote in 2017.  Still, he said, more Utah Navajo support Bears Ears than don’t.

In fact, “the Navajos in Utah first led the fight to get the area protected, after there were raids in 2009,” Adakai added.  In June 2009, federal agents arrested a number of residents of Blanding, Utah, who had “allegedly looted artifacts such as pipes, jewelry, stone knives and woven sandals and sold them to an undercover informant,” reported the Denver Post at the time.

Adakai told us that “this movement” by Utah Navajos to get the area protected “eventually lead to the Bears Ears Coalition,” of which he is a member.  In July 2015, leaders from the Navajo Nation and other indigenous tribes formed the coalition with the aim of conserving Bears Ears.

The coalition not only condemned Trump’s decision to shrink the monument, but its member tribes also have filed a lawsuit, claiming the decision wasn’t legal.

Swift, the DOI spokeswoman, also pointed us to sources that show Rebecca Benally, the commissioner for Utah’s San Juan County and a member of the Navajo Nation’s Aneth Chapter, opposed the initial creation of the monument and supported Trump’s decision to shrink it.  We reached out to Benally for comment, but she hasn’t responded.

Overall, there does appear to be some disagreement among members of the Navajo Nation living in the chapter territories near Bears Ears, but it’s not true that “all” support Trump’s decision to shrink the monument, as Zinke claimed.

This post first appeared on Mage Soapbox, please read the originial post: here
People also like
Building a Talent Pool in a Tight Market
COVID-19 Violations: First Fines Already Hitting Players
Florence in One Day: How to Plan the Perfect Itinerary
Escape the crowds: quiet corners in six of Britain’s national parks
Teen Depression: Essential Signs & How Parents Can Help
About Rear-End Collisions
10 Health factors that you can improve with Delta 8
Scientists Create Music Out of Spider Webs, May Enable Human-Spider Interaction
A Furry’s Guide to Cryptocurrency
Blues Guitarist Tab Benoit Kicks Off National Tour April 29 at The Grand Opera House Of The South