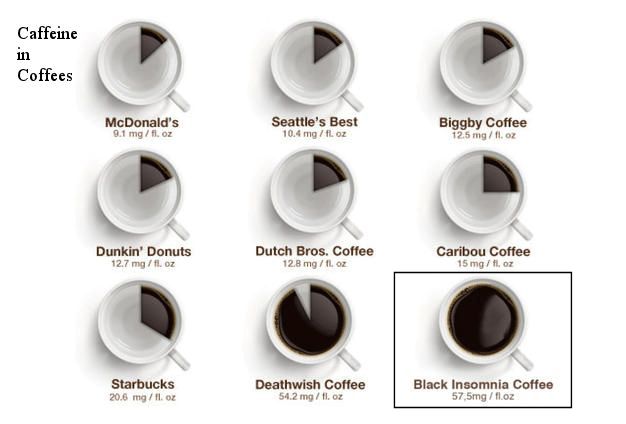 "Black Insomnia is the Strongest Coffee Ever, and It's Not For the Faint of Heart" by Bruce Brown, Digital Trends 3/31/2017

No, we're not getting a jump on April Fools' Day — this Coffee could put you on the ground.  Black Insomnia Coffee is officially the strongest coffee in the world — strong enough to be dangerous, according to CNN.

How strong is Black Insomnia?  The dangerous brew, made from robusta beans, is almost three times stronger than Starbucks' dark roast and more than six times stronger than McDonald's coffee.  The International Food Information Council recommends a maximum 300mg of caffeine daily, while the FDA's limit is 400mg.  One 12-ounce cup of Black Insomnia has 702mg.  And that's enough to be harmful to many people.

Johns Hopkins School of Medicine researcher Mary Sweeney said, speaking of Black Insomnia's caffeine content, “This makes it easier to consume more caffeine than you intend to and effects can range from mild to severe, for example, jitteriness, nervousness, restlessness, and trouble sleeping.  The most serious effect would be cardiac arrhythmia (irregular heartbeat).”

Newly retired coffee lover Sean Kristafor founded Black Insomnia in June 2016.  Kristafor's goal was to create the strongest coffee in the world.  To prove Black Insomnia deserved the title, the company had its coffee tested against other strong brands, with an eye on Death Wish coffee, the previous claimant.

At first, the brew was available only in cafés in Cape Town, South Africa.  Jump forward five months to October, and Kristafor had customers in 22 countries.  Now Black Insomnia is selling 5 to 6 tons of coffee each month.

“We're the leader in the strong coffee category and are not letting up anytime soon,” Death Wish customer service representative Calden Tuller told CNN.  “Our coffee is much different than the competition, due to the fact that our roast is USDA certified organic, and fair trade certified as well.”

Caffeine Informer's editor Ted Kallmyer places Black Insomnia on its list of the most dangerous caffeinated products.  Kallmyer said habitual coffee drinkers build up a tolerance over time so exceeding 400mg a day doesn't harm them.  “However, the problem with these products is that they can inadvertently be consumed by people who are not in the targeted category.”

Be wary out there if someone hands you a cup of coffee and says, “Be careful, it's strong.” They may not be kidding.

K-Cup USERS:  You can order "Disposable Cups for Use in Keurig Brewers (a kit)" from Simple Cups, that allows you to make K-Cups using ANY coffee.  (Amazon)