TRUMP AGENDA - Who IS That Pulling the Strings?? 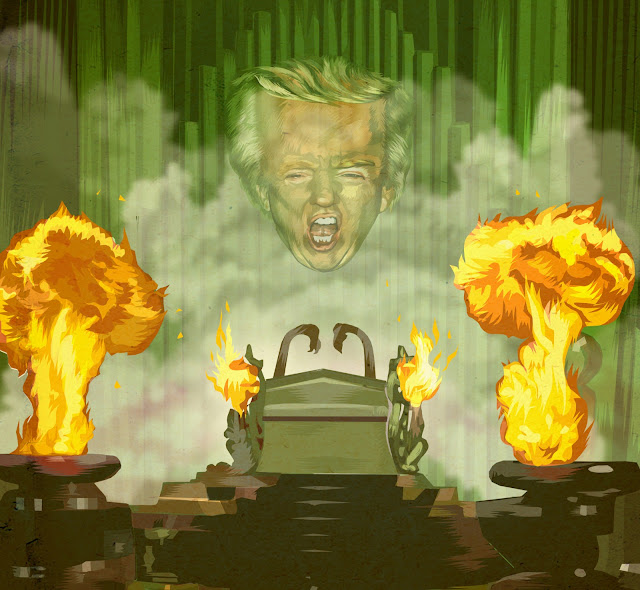 "The Right-Wing Machine Behind the Curtain" by Theo Anderson, In These Times 3/14/2017

The radical conservative Heritage Foundation has spent 40 years trying to gut the federal budget.  Now Trump is providing to be the perfect tool.

THE MOOD WAS JUBILANT TWO DAYS AFTER THE NOVEMBER 2016 ELECTION at a Washington, D.C., panel co-hosted by two powerhouse conservative thinktanks—the American Enterprise Institute and the Heritage Foundation.

In his opening remarks, Heritage president Jim DeMint rejoiced that Donald Trump's election had “preserved our constitutional republic.”  Panelist John Yoo, a Berkeley law professor best known as the architect of George W. Bush's justification for torture, drew laughs with feigned surprise at the audience size.  “I thought everyone at Heritage was working over at transition head quarters,” Yoo quipped.  “I asked the taxi cab driver to take me to Trump transition headquarters, and he dropped me off here.”

Indeed, Politico reported in November that Heritage, based in D.C., had become “a crucial conduit between Trump's orbit and the once-skeptical conservative leaders who ultimately helped get him elected.”  By Heritage's own account, “several dozen” of its staff members worked on the transition team, and Trump used its recommendations for his list of potential Supreme Court picks.

Vice President Mike Pence, the head of that transition team, has deep ties to the foundation.  In 2006, Heritage co-founder Paul Weyrich, a mentor of Pence's, said of him, “Nobody is perfect, but he comes pretty close.”  In early December, Pence gave the keynote speech at a Heritage event (held at Trump's D.C.  hotel) to honor its biggest donors.  He promised that the Trump administration “is now and will continue to draw on” the institution's work.

Heritage defines its mission as creating “an America where freedom, opportunity, prosperity and civil society flourish.”  It has an annual budget of about $100 million and a staff of about 90 “experts” who hold such pseudo-academic titles as “research fellow' and “policy analyst.”  One example is libertarian economist Stephen Moore, a Trump advisor and a Heritage “distinguished visiting fellow.”

Heritage's ties to the administration have received relatively little press.  With its academic gloss, it may seem benign set against the extremism and zaniness that dominate the headlines: a press secretary only marginally less bizarre than the Saturday Night Live spoof of him; a key advisor who embraces the role of Darth Vader; cabinet picks who have promised to abolish the institutions they lead; executive orders that stigmatize Muslims and violate the Constitution; attacks on the press as “the enemy of the American people”; and on and on.

Yet a grim reality underlies the White House circus.  Trump's election is the culmination of a radical right-wing movement that began with the founding of Heritage in 1973.  “We are different from previous generations of conservatives,” Weyrich said in the early 1980s.  “We are radicals, working to overturn the present power structure of this country.”

Trump is that movement's best hope yet for achieving its great dream of gutting government.  Heritage isn't an appendage of the Trump administration's radicalism.  It's the heart of it.  Trump is just a tool.

This post first appeared on Mage Soapbox, please read the originial post: here
People also like
6 Smart Ways to Raise Cash for Your Renovation Project
Spreading Joy and Holiday Cheer with Mondel?z’s World Favorite Treats
You’re Not Alone; It Gets Better
The Cage of the “Surreal” – Post 1 of 2
Green Card Denials Increase Substantially Inside the US in 2020: Another Brick in the Invisible Wall.
Gixxer250 Endurance Ride Part-1 "Exploring the Greatness" | Hindi | GearFliQ
George Elsasser, American Psyche: The Unlit Cave
10 Ways To Be Proactive and Stand-Up For Social Justice Everyday
How Parents Can Talk to Their Kids About Race and Racism
Seal Shore campsite

TRUMP AGENDA - Who IS That Pulling the Strings??