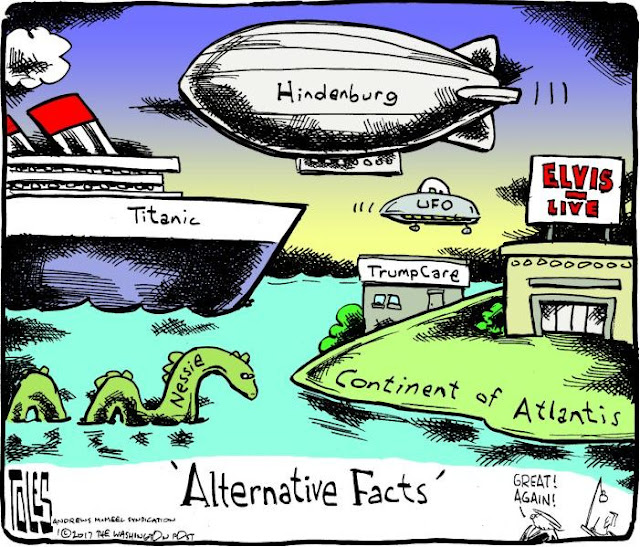 “Restricting extraneous Freedoms of Press, Religion and Speech, and establishing Christianity as the State Religion are also ‘Alt-Word' permitted,” said Kellyanne Conway, “as is, of course, the quartering of soldiers in your home.”

“Freedom is in the eye of the beholder,” she said, adding that “citing actual words is what liberals do.”

The First Amendment's “Alt-Word” meanings, she noted, “are as clear as the photographs of Mr Trump's million-person inauguration.

“Just take a look, and you'll see for yourself.”

The misinformation ministress went on: “The trick is to view the First Amendment in a shady light.  If you squint your eyes and hold it at the right angle, and I do mean the Right angle, you'll see that its Alt-Words reveal numerous restrictions.”

“It's like that blue dress/gold dress thing.  You see it one way but Mr Trump sees it another — gold, of course.”

Kellyanne listed some of the First Amendments' alt-word limits.  “For example, you can't shout ‘Donald Trump is lying, racist, fascist bastard!' in a crowded election,” she said.  “Even if it's true.”

Finally, Ms Conway noted that the inability of some Americans to view the Bill of Rights in the proper light was a “tragic disability” comparable to color blindness or muscular degeneration.

The White House would shortly be issuing government “Alt-Read” spectacles to help disadvantaged citizens who stubbornly continue to see things in the old way.

Press secretary proclaims new era for ‘free press,' thanks to the White House.

Amid all the controversy over Trump's war against the media, he made a stunning announcement today: “To stop the fake news that the lying liberal press like the New York Times is feeding to the American public, I have decided to funnel all White House news through an 'Official White House News Outlet.'  From this day forward, all White House News will be reported through the only reputable newspaper in the country, The National Enquirer.”

Trump then left the podium and press secretary Sean Spicer remained to answer questions from White House staffers who had just been hired on as reporters by the National Enquirer.  Reading from the 3 X 5 cards with assigned questions from the press secretary, a novice reporter asked how this was going to improve communication with the public.

“I'm glad you asked that,” he responded.  “Now every citizen will be able to know what the President is thinking or doing without paying a hefty subscription fee.  They can just pick it up at their local grocery or liquor store.”

“Were any other newspapers considered?” read another.

“The Star was a close second, so as a consolation, they will be given a front row seat at any future press conference.”  The press secretary smiled and added as he left the podium, “It will be great to have a truly free press again.”

An interview with the editor of The National Enquirer revealed that due to a huge influx of cash from an anonymous investor, they will be tripling their output, having purchased a new fleet of delivery trucks and three times their present printing equipment, all to be housed for free in the Trump Tower, which he called a “magnanimous gesture” by the President.  They are expecting a surge in sales, particularly in the Rust Belt.

A dark expression then came over the editor's face.  “We have just one problem,” he continued.  “Now that we're giving the White House so much space, we haven't figured out where to put the news on Bigfoot and alien abductions.”