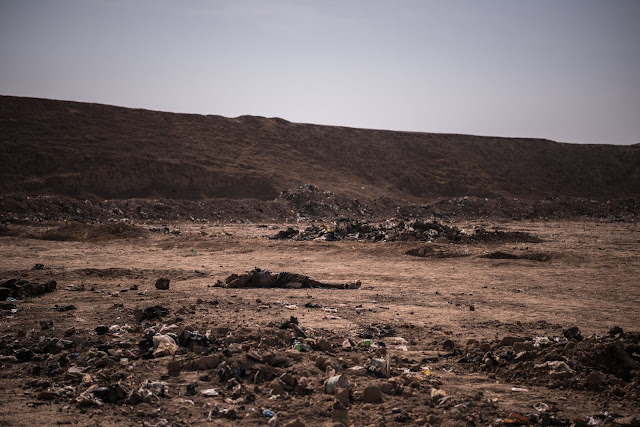 REMINDER:  'ISIL (aka ISIS) is a theocracy, proto-state and a Salafi or Wahhabi group.  It follows an extremist interpretation of Islam, promotes religious violence, and regards Muslims who do not agree with its interpretations as infidels or apostates.'

The members of ISIS are NOT mainstream followers if Islam, and DO NOT represent the vast majority of Muslims.

"Another Mass Grave Dug by ISIS in Iraq, and a Ghastly Ritual Renewed" by Tim Arango, New York Times 11/30/2016

The battle was over in Hamam al-Alil, Iraq, an old spa resort town that the country's security forces had wrested from the Islamic State a few days ago, but one Iraqi soldier was still on a very personal mission.

The soldier, Zaman Mijwal, was looking for his older brother, Munther, a former policeman he described as “a quiet man, a poor man,” who lived in a nearby village but hadn't been heard from in weeks.

Mr. Mijwal's circuit had taken him to a stretch of road flanked by two dirt fields.  He pointed to one side, where decaying, headless corpses were lying in heaps of trash on a barren plot of land that had once been a shooting range for the Iraqi Army.

He pointed to the other side of the road, just an expanse of earth that looked freshly moved.

With every mile of territory the Iraqi security forces retake from the Islamic State, it seems another mass grave is uncovered.  It has become nearly ritual, and despairingly regular.

The legacy of the mass grave in Iraq is long, stretching back further than the Islamic State to the times of Saddam Hussein's industrial-scale killings.  It is the horrible symbol of what has been for decades a gut-wrenching constant of Iraqi life, the disappearance of loved ones into the machinery of despotism.

For Iraqis, the Islamic State, for which the mass grave is as much a part of the group's infrastructure as makeshift prisons and slave-holding houses, is just a new form of tyranny with direct links to Mr. Hussein's regime.  Many former Baathist officers from Mr. Hussein's security forces populate the top ranks of the Islamic State, mimicking the former dictator's tactics.

Lately, with the Islamic State under pressure from Iraqi security forces, the group's cruelty has gone into overdrive: Many of the mass graves recently uncovered, the biggest of which was in Hamam al-Alil, contain the bodies of local men.  Most of the buried were former members of the security forces who were executed only in recent weeks, after the campaign for Mosul began.

There are those, like Jamal Abul Younis, who count themselves as lucky.  Mr. Younis is a former policeman from Hamam al-Alil who was also marked for execution, but survived by hiding in a hole in the ground, obscured by an air cooler, in his dirt-floor house.  Of his time hiding out, he said, “Each one hour was like one year.”

He is now one of just a few surviving witnesses to the Islamic State's killings in Hamam al-Alil.  One evening around 8 p.m. several weeks ago, he said, he watched from his rooftop as eight minibuses drove toward the area where the mass grave was discovered, and he heard gunshot after gunshot.

“I saw DAESH bury 200 bodies over here,” he said, using an Arabic acronym for the Islamic State, which is also known as ISIS or ISIL.  (The official government estimate is that roughly 100 people were killed in Hamam al-Alil.  But Human Rights Watch, after carrying out its own investigation, believes that at least 300 were killed there.)

In the days before the killings, he said, Islamic State militants herded hundreds of people — perhaps thousands — from nearby villages and took them to Hamam al-Alil, using them as human shields against the possibility of American airstrikes.

In the city, he said, the militants gathered the people, reciting verses of the Quran and praying to God to protect them from Iraq's Shiite militias and army.  Then they separated out the former policemen, many of whom, after the Islamic State conquered their lands more than two years ago, repented for their service and made peace with their new rulers.

Now, as government forces waged an offensive to reclaim these territories, the Islamic State saw them as potential spies, or a fifth column preparing to rise up and join the security forces, and ordered them killed.

“I cannot believe I am still alive,” Mr. Younis said.

For Iraqis, the pain of not knowing can be the worst of all.  The International Commission on Missing Persons, a Netherlands-based organization, has estimated that up to a million Iraqis have gone missing in recent history.  That encompasses the war between Iran and Iraq, the mass killings ordered by Mr. Hussein after a Shiite uprising in 1991, the Iraqi government's Anfal chemical-weapon strikes against the Kurds in the late 1980s, and the more recent sectarian civil war of the last decade.

The commission noted on its website that there are “millions of relatives of the missing in Iraq who struggle with the uncertainty surrounding the fate of a loved one.”

Go anywhere in Iraq, especially in the south where Shiites dominate, and knock on almost any door, and you will hear a story of a lost loved one and, improbably, of a remaining shard of hope.

Nihad Jawad, a teacher from the southern city of Hilla, said that one night in 1991, her brother left home and was never heard from again.  She has heard all sorts of rumors — that he was seen being apprehended by the military, that he was shot.  “We searched everywhere for him, and we have found nothing,” she said.  “We still have hope that he is still held in one of the secret prisons.”

The Islamic State's brutality has written a new chapter in that dark history.  The number of bodies has overwhelmed the capacity of the Iraqi government, and very few of them are ever identified by DNA testing.

In Diyala Province, where the Islamic State was once strong, a father who lost his son about two years ago said he scours jihadist websites for videos that might show his missing child.  He rushes to the scene of every mass grave uncovered in the province.

“The most difficult thing is when my grandson asks me about his father,” said the man, who gave his name as Abu Marwan.  “I answer, ‘He is on a trip and will return one day.'”

Mr. Mijwal, the soldier, like millions of others here who have endured the same painful ritual, has found no answers about what happened to his brother.

“We have no information about him,” he said.  “So I came here.  It's very difficult for me.  I don't know his destiny, his fate.  At the very least, I need to find his body.  This is the important thing for us.  So we can have a funeral.”

He added, “Thousands of people don't know the fate of their loved ones.”

There is a well-known Iraqi novel called “Saddam City,” by Mahmoud Saeed, in which the protagonist disappears into one of the old Hussein regime's many prisons, leaving his loved ones scrambling for information.

In the novel, pondering his own fate as a prisoner, he recalls “the futility of trying to help a neighbor find her husband, who had disappeared.” They visited a hospital, where “we were no more than the latest link in a long chain of people who visited hospitals inquiring about missing loved ones.”

Just up the road from the Hamam al-Alil killing grounds where Mr. Mijwal searched for his brother, others were looking for answers, too.

A former policeman named Muneer Muhammed, 37, said that he hid on the night of the killings, but that his brother, Anmar, another former policeman, was among the hundreds rounded up.  “They took the former policemen because they were afraid they would rise up,” he said.

Tears were streaming down his cheeks.

“I'm crying because I was able to save myself, but I couldn't save him,” he said.