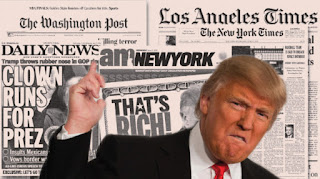 Last week, Donald Trump blamed the "disgusting and corrupt media" for not covering him "honestly" and for putting "false meaning into the words I say." Philip Bump, of the Washington Post, writes:

Donald Trump has the same ability as any other candidate to say precisely what he wants to any voter in any state: By advertising. He can buy ads in swing states and run 30- or 60-second spots making whatever case he wants in any language he chooses. He can send mail, he can knock on doors. He can, in other words, run a campaign. But he’s not.
He isn’t running any ads, spending zero dollars on television (and getting outspent by the Green Party and Libertarian candidates). He isn’t contacting voters on doors or on phones, and has hardly any field offices. He isn’t sending mail. He’s tweeting and he’s Holding Rallies, and not much else.

Simple Tips To Increase Self-Esteem
Stablecoins be a Way to Break U.S. Do…
‘A Pound for a Poo’ in Stratford upon…
Rug Auction Highlights from Nazmiyal’…
How To Start An Online Business With …
And he’s holding rallies in places like Connecticut, where he was on Saturday. He told the crowd there that he was going to make a “big play” for the state, which one has to assume isn’t true. Trump won’t win Connecticut, a heavily Democratic state. There’s no point in his wasting campaign resources on the state (in the event he starts expending resources anywhere) since it only holds a couple of electoral votes anyway. It’s simply baffling that he would hold a public event there at all, even if he’s not serious about carrying the state.

Trump trumpets his management expertise. But, given his many failed ventures and serial bankruptcies -- and now his floundering campaign -- it appears that he couldn't manage a two car funeral.
As a manager, he believes his prime function is to assign blame. Of course, he'd never blame himself.
Image: almostdailybrett.wordpress.com