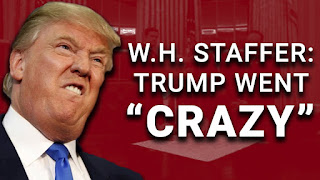 The House of Representatives has condemned Donald Trump. And, in one fell swoop, he has united the Democrats. But, Jonathan Freedland writes, Democrats should be wary of Trump -- because he does have a plan:

Put simply, he wants to choose his opponent for 2020. He doesn’t want the face of the Democrats to be Joe Biden, Elizabeth Warren, Kamala Harris or Pete Buttigieg. He wants it to be a composite of AOC, Omar, Tlaib and Pressley. That’s partly because he reckons the squad’s politics are out of step with the US mainstream – that he can easily cast them as radical socialists with terrifying views. But mainly it’s about race (with a dash of misogyny for good measure).

Trump’s calculation is that he can repeat in 2020 what he did in 2016, winning an electoral college majority by winning in Michigan, Wisconsin and Pennsylvania – and that he can edge a victory in those states by appealing to white voters stirred by racial resentment. Rather than trying to appeal to moderates and independents by boasting of, say, low unemployment and good economic numbers, he’d rather pull in yet more of the demographic that already favours him: white, often male, former Democratic voters without a college education. And he thinks he can do that by getting AOC’s or Omar’s face on the news every night.

It’s race-baiting, no doubt about it. But it might also be effective, as Trump’s 2016 campaign proved. The result is a dilemma for Democrats. Do they try to win back those white, low-income voters who supported Trump last time or do they use the president’s hateful behaviour, including his attacks on the squad, to drive up turnout among those appalled by it – especially black voters and young people?

Trump can drive you crazy -- because, in the end, he is crazy. But Democrats must not go off the deep end. They must think very carefully about their next steps. It's always good policy to beware of bigots.