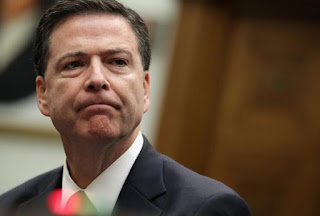 Donald Trump knows how to play people for suckers. That talent -- if you can call it that -- has been on display throughout his presidential campaign. The latest example is FBI Director James Comey. Frank Bruni writes in the New York Times:

How strange but how fitting. This entire election is being conducted in the key of hysteria, and Comey just found a way to amplify that ugly music.
Listen, Clinton made an awful decision in setting up a private email server, then compounded that error by dragging her feet through defensive non-apologies that gave the story such legs. Now she limps to the finish line when she should be hitting full stride.

Empire of Language- Prelude-Metaphors…
How to Create a Winning Black Friday …
Ripple’s Swell Conference Despite the…
OPINION - Shields and Brooks 9/6/2019
But Trump is as much of a part and player in this latest chapter of the email saga, because of the one-syllable grenade that he keeps lobbing at the body politic, his furious mantra over these final weeks.
“Rigged,” “rigged,” “rigged.” Many Americans have come to believe that. Many others are rightly determined to prove to that group how wrong they are, or at least not to add accelerant to the wildfire.

And so all of us, including Comey, operate in a befouled atmosphere, tailoring our actions to it.

There are established rules for FBI investigations -- rules which Comey has ignored:

Indeed, he broke with the longstanding F.B.I. policy of not commenting on ongoing investigations. He also defied the wishes of senior officials in the Department of Justice, according to various news reports early Saturday afternoon. And he frustrated everyone — conservatives, liberals, Trump, Clinton — because his disclosure was all questions, no answers.
Regardless, the media went nuts, declaring that the development could bend the shape of the race and assuming damage to Clinton without any polling or other evidence to back that up.

However the investigation turns out, things will not end well:

How is this supposed to play out? If, a few days from now, the F.B.I. determines and announces that none of the emails contain classified information or anything else of concern, will Trump and Clinton’s other enemies conceivably believe that? Hah! They’ll be shouting “rigged” all over again. They’ll be shouting it louder than ever.