On Waves Of Ignorance 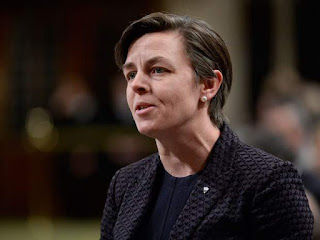 Kellie Leitch is doing to the Conservative Party what Donald Trump has done to the Republican Party -- splitting it right down the middle. Michael Den Tandt writes:

Apparently, as far as Team Leitch is concerned, a new wind is blowing — a nativist wind, ripe for the harvest. Last week it was reported that a Leitch campaign survey had posed this question: “Should the Canadian government screen potential immigrants for anti-Canadian values as part of its normal screening for refugees and landed immigr

“Canadians can expect to hear more, not less from me, on this topic in the coming months,” she said Friday.

There has always been political hay to be made by stoking fear of "the other." And it's paying off for Leitch:

Why did Leitch decide to go all-in? One objective seems plain: donations. Last month it emerged she’s taken an early but significant lead in fundraising, accounting for about 60 per cent of the $376,377 raised by three then-declared leadership aspirants (Leitch, Chong, Bernier) in the second quarter, The Canadian Press reported.

Leitch is reaping profits. The party, however, isn't doing so well:

The takeaway is this: Leitch doesn’t care about upending the pluralist tradition of her party, or about how her latest gambit will surely be used by the Liberals to paint all Tories as xenophobes. Nor does she care about the evident risks in broaching a culture war, witness the career-ending losses of Harper last year and Quebec premier Pauline Marois in 2014. Leitch cares, it seems, about filling her campaign coffers.

She's taken a page from Donald Trump's playbook. Clearly she hopes to ride to power on waves of ignorance.

On Waves Of Ignorance