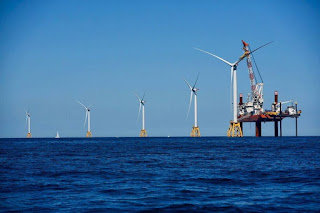 Off the coast of Block Island, Rhode Island, the first offshore wind farm is being completed. It has taken just about 10 years to complete but the hopes are that the final touches will be in place in the next month or two.

The five-turbine, 30-megawatt project is actually tiny compared to the 100-plus turbine farms that are common in Europe.

What will be the world's largest offshore wind farm, with 300 turbines and 1,800 megawatts, was just approved this week in the U.K.

But America has been far slower to adopt offshore wind technology, with proposals stalled by regulators and lawsuits.

American companies, some from the oil and gas sector, built the foundations and laid undersea fiber cables.

GE Renewable Energy is responsible for the turbines themselves, bringing the towers and blades from Europe, where they are made and assembled at a site in Providence over nine months.

Each 650-foot-tall turbine has three blades, each weighing 29 tons each and longer than half a football field. The tower itself, broken into three sections, weighs 440 tons.

While it is more expensive and more difficult to build offshore, the chances of generating more energy in the windier ocean is the reward.