U.S. Oil Pipeline Nearly as Long as Keystone XL Has Been Fully Approved

During the XL Pipeline issue, I always said that a pipeline could have been built in the U.S. without State Department or Presidential approval, and would be transporting a better grade of oil.

Despite several months of heavy opposition, an oil pipeline slated to cut through four Midwestern States has all the Regulatory Permits it needs for full build-out.

The U.S. Army Corps of Engineers gave the final blessing to the Dakota Access Pipeline on Tuesday. Developers now have the last set of permits they need to build through the small portion of Federal land the line crosses, which includes major waterways like the Mississippi and the Missouri rivers. 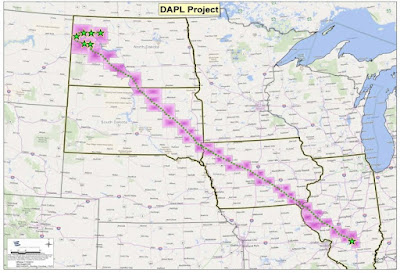 The so-called Bakken Pipeline goes through mostly State and Private land in North Dakota, South Dakota, Illinois, and Iowa. It received the last State Permit in March. Construction has been ongoing in some areas, although some landowners have pending Court Cases as they object to the Eminent Domain powers the company got.

Tribes too opposed the project, claiming the pipeline would harm wildlife and Sioux sacred land in Northwest Iowa. The Army Corps of Engineers delayed their permits in part to review how Sacred Land could be avoided, and concluded the line would run underneath. The final set of permits approved relate to crossing waterways.

Starting in the oil rich Bakken Region of North Dakota, the Bakken Pipeline will run through four States before it reaches a market hub near Patoka, Illinois.

The pipeline will transport up to 570,000 barrels of sweet crude oil per day from North Dakota’s oil-rich Bakken Formation, to a market hub near Patoka, Illinois.

Critics have long said the pipeline could severely harm thousands of miles of fertile farmland, forests, and rivers if a spill were to occur. Federal agencies have said the Bakken Pipeline avoids “critical habitat.”

But Dakota Access, a subsidiary of Dallas-based Energy Transfer Partners, says it will use state-of-the-art monitoring equipment and shut-off valves. Personnel will be stationed along the more than 1,150-mile pipeline for further support. Yet U.S. pipelines spilled three times as much crude oil as trains over the period of 2004 to 2012, according to a recent study by the International Energy Agency. However, pipeline incidents happened much less frequently than oil train accidents.

The company says the benefits it will provide make it eligible for the Eminent Domain powers it got to condemn the land of Private Landowners who can decline to grant easements. More than 95% of the private land has been secured in Iowa. The company has secured all the land elsewhere, the Des Moines Register reported.

The company says the $3.8 billion project will create nearly 12,000 jobs, millions in taxes, and at least $195 million in easement payments to landowners. It moreover means less oil by rail and rail traffic in general, the company said. Officials and many union and business leaders have welcomed those benefits. "It will provide untold benefits to the security of our nation and our economic future," Ed Wiederstein, Chairman of the Midwest Alliance for the Infrastructure Now, said in a statement. "The agriculture industry, in particular, relies on affordable, easy to access energy and the Dakota Access project will provide value for decades to come.”

But the pipeline still has pending court cases, which in Iowa could prove lengthy and even reach the Iowa Supreme Court. A coalition of Iowa landowners says that the company shouldn't have eminent domain powers because it’s not a public utility. In addition, plaintiffs claim the Bakken pipeline is not a public improvement and does not serve any public use, according to court documentation.

The company is free to build on all State and Private land via eminent domain as needed because no court stay has been granted.

The Bakken Pipeline, comparable in length to the Keystone XL, is scheduled to be operational by the end of the year.

U.S. Oil Pipeline Nearly as Long as Keystone XL Has Been Fully Approved