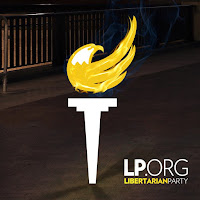 Their vision is for a world in which all individuals can freely exercise the natural right of sole dominion over their own lives, liberty and property by building a political party that elects Libertarians to public office, and moving public policy in a libertarian direction.

Two-term Governors Gary Johnson and William Weld were nominated to be the Libertarian Party's Presidential and Vice Presidential candidates on May 29, 2016 by the delegates to the Party's Nominating Convention in Orlando, Florida.

Although only the most fanatical Party loyalists feel confident about their chances of winning the Presidency, many think that Libertarians are poised to win a record number of votes. Some believe they could steal a state, which no third party has done since George Wallace in 1968, or get enough votes to influence the election, as Ross Perot and Ralph Nader did.

More than disrupting the election, though, they see it as a golden opportunity for true National exposure and expansion. The Party received more than a million votes in 2012, its most ever, and recent polling suggests a growing appetite for third-party candidates.

An NBC News/Wall Street Journal poll found that 47% of registered voters would consider a third-party candidate if Trump and Clinton were the Major Party nominees. Political analysts were taken by surprise this spring when two separate polls showed Johnson the 2012 Libertarian Party nominee, pulling between 10% and recently 12% of the National vote.

If Johnson can get to 15% in polls, he can stand on the debate stage as the first Third-Party candidate to do so since Perot in 1992. The feat would provide a bounty of free news media attention for a Party that does not have the money for expensive advertising or voter-outreach efforts.

Johnson believes that with sufficient exposure and a positive message he can attract both the young, progressive voters who were backing Sanders and Republicans who want limited Government but fear that Trump would ratchet up spending and start trade wars.

“We should be portraying an optimistic message,” Johnson said in an interview. “Life is good in America.”

Looking to add credibility to his campaign, Johnson is teaming up with Weld. Weld, who has compared Trump’s immigration policies to those of Nazi Germany, said he was reaching out to Republican donors who have decided that they cannot support their Party’s presumptive nominee. “I’m going to go knocking on every door I can to try to help us along,” Weld said.

Kyle Kondik of the Center for Politics at the University of Virginia said a ticket with Johnson and Weld could capture many votes in their Home States. Alaska, Arizona, Colorado and Nevada have also shown a propensity to find unconventional candidates appealing, he said, so the Libertarians could tilt close races there. “The Libertarian ticket is kind of a mix of left and right,” Mr. Kondik said. “There is potential appeal for it to be a soft landing spot for voters of all stripes.”

Still, the climb will be steep. “Ultimately it would be a giant shock if they carried even one state,” Mr. Kondik said. “Perot never did, and he got 19%.”

Despite efforts to broaden their base and become an acceptable alternative to the American public, Libertarians battle perceptions that they are “Republican lite” or “old white guys.” Their Convention’s carnival-like atmosphere belied those caricatures: A cross-dresser clad in a leopard-print leotard strode across the stage with an umbrella to introduce one candidate, and professional dancers basked in strobe lights at a party before the candidates debated on Saturday night.

The debate itself offered a window into some of the challenges the Libertarians face as they try to package themselves for broader consumption while sticking to their Limited-Government principles. The conversation often drifted into strained arguments about how common sense would keep heroin out of the hands of children, how Government-issued driver’s licenses are unnecessary, one suggestion was a pink flashing light for new drivers, and how public infrastructure could be built without taxes. “Who will build the roads?” Austin Petersen, a Presidential candidate and Founder of The Libertarian Republic, a magazine, said during the debate. “Where we’re going we don’t need roads.”

Win or lose, most remained encouraged that this year will be important for the Libertarian Party and that even if they do not take the White House this time there are opportunities to win State and Local races and to convert Republicans and Democrats.

Scott Scrimshaw, a Community Chaplain from Oregon, switched from Republican to Libertarian six months ago after he surveyed the field of candidates and found himself disappointed. A longtime admirer of Ronald Reagan, he said that he could not trust Trump with his vote and that he did not want to choose between “the lesser of two evils.” “I feel we are really on the edge of entering a new era of American politics,” he said. “The era of the third party.”

CLICK HERE for more information about the Party's 2016 candidates.

This post first appeared on The Independent View, please read the originial post: here
People also like
An Officer and a Spy
Why Are CBD Capsules Trending in the USA?
How to Exchange ETH to BTC Without Going Crazy Over It
Cryptography Interface Design is a Security Concern