Ohio Voted to End Gerrymandering and Other State's Campaigns 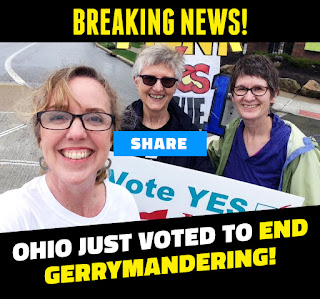 This Victory was hard-won by a huge Coalition of Anti-Corruption Volunteers, led by Fair Districts = Fair Elections.

Wins like this inspire movements... if enough people know about them.

This is a huge Victory in the Fight to End Gerrymandering, Stop Political Polarization, and give Power back to the Voters.

Ohio is one of the most Gerrymandered States in the Country. If the People can Organize and Pass a Statewide Law in Ohio, we can do it Anywhere.

Thousands of Volunteers from the Fair Districts = Fair Elections Coalition collected more than 200,000 Signatures, which Pressured the Legislature to put Gerrymandering on the Ballot.

CLICK HERE for more information on the New Law.

There currently is Four other Statewide Gerrymandering Campaigns that could Pass this year.

Here's a Snapshot of the other Four:

Colorado - Voters will have the opportunity to Vote on a Measure that would have a Transparent and Independent Commission draw Congressional and Legislative Lines, thanks to the hard Bipartisan work of Fair Districts Colorado and People Not Politicians. The Plan Won Unanimous Support in the State Senate and House, and it will appear on the November Ballot.

Michigan - Thousands of Volunteers for the Voters Not Politicians Campaign gathered more than 425,000 Signatures in less than Four Months to put a Gerrymandering Reform Measure on the Ballot this November.

Missouri - Represent.Us Members joined Volunteers and Organizers in the Clean Missouri Coalition to put Gerrymandering Reform on the Ballot. They submitted more than 345,000 Signatures for a Measure that would fix Gerrymandering, Ban Lobbyist Gifts to Politicians, and increase Transparency in State Government.

Represent.Us Members are fueling these Campaigns, and they're working with Partners in all of these States to make each and every one of these a Win.

4 Easy Steps to Take When Buying a House

Ohio Voted to End Gerrymandering and Other State's Campaigns