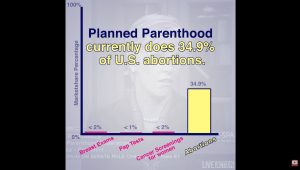 Planned Parenthood is receiving more government funding and performing more abortions than it did 10 years ago. Meanwhile, non-abortive services like cancer screenings are on the decline.

The abortion provider is attempting to stave off a heated effort to strip its tax-payer funding. Earlier this month, President Donald Trump signed a billallowing states to defund Title X of the Public Health Services Act, which funds family planning services. The bill was passed by the Senate in March with a tie-breaking vote from Vice President Mike Pence.

An obvious swipe at Planned Parenthood, the bill was called a “major pro-life victory” by House Speaker Paul Ryan. Democrats decried the action, claiming it would rob women of critical health care.

Planned Parenthood defenders often point to the fact that federal law already prohibits tax-payer funding of abortions. They also cite numbers claiming abortion makes up only 3 percent of Planned Parenthood’s work. But that hasn’t stopped pro-life activists and Conservative lawmakers from fighting it.

LifeSite News listed the exact numbers, which come straight from Planned Parenthood’s own reports. (View the 2005-2006 report and the 2014-2015 report.)

Quick Tips To Talk Yourself Down From…
I was nervous about switching therapi…
معلومات عن نبات الزنزلخت
Can CBD Be Used to Fight Coronavirus …
Q&A with Phil Yates: Shaping the Futu…
Read More Here