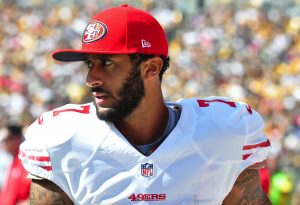 First it was his refusal to stand for the National Anthem. Now, it’s Colin Kaepernick’s comments about Cuban dictator Fidel Castro drawing criticism.

The San Francisco 49ers quarterback was booed by Miami Dolphin fans Sunday before the Dolphins-49ers face off, after he was quoted praising the communist Castro in the Miami Herald.

In an article published Friday hours before news of Castro’s death had spread, Miami Herald reporter Armando Salguero recounted a phone exchange he had with the NFL superstar before Sunday’s game.

On a conference call, Salguero asked Kaepernick about a t-shirt featuring Castro he’d worn at a press conference in August -- right after he began his protest of inequality and oppression of minorities in America by kneeling during the National Anthem.

While Kaepernick initially claimed that he was wearing a Malcom X t-shirt (both men were featured), he later praised Castro for Cuba’s education system, saying, "One thing Fidel Castro did do is they have the Highest Literacy Rate because they invest more in their education system than they do in their prison system, which we do not do here even though we're fully capable of doing that.”

Kaepernick also equated incarceration in America with the breaking up of families who attempted to flee Cuba’s oppressive regime.

Salguero, who remembers fleeing from Cuba with his mother at a young age, debunked Kaepernick’s claims that Cuba has the highest literacy rate and shared memories from his own family’s painful immigration experience:

[A] Castro soldier stopped us before we boarded and demanded to see the family's papers. I remember this as if it was yesterday. That bearded guerrilla in green and carrying a rifle confirmed all three of us were cleared to leave Cuba.

But, he added, that only two of us could leave because that's what he personally was deciding. He then told my father to pick who goes and who stays. What ensued next is hazy to me. I know there were tears. I know there was drama. But suffice to say only my mother and I got on that plane.

My family breaking up because my parents wanted me to be free is not the same as, for example, a father of two in the United States committing a crime and being away from his kids because he was convicted and is serving time.

Salguero ended his article by calling Kaepernick an “unrepentant hypocrite,” implying that his “Malcom X shirt featuring Fidel Castro” would cause pain if worn in Miami where “hundreds of thousands of Cuban exiles live with memories similar to mine.”

Considering the roaring chorus of boos the quarterback received in Miami Sunday, it appears that Salguero was right.

When news of Castro’s death spread late Friday, many Miami citizens poured into the streets in celebration. But even as Cuban exiles rejoice at the death of the dictator they remember as “dividing their families, taking their property, imprisoning and sometimes shooting their friends and relatives, wrenching them from their homes and their country,” as the New York Times reported, some liberals are attempting to whitewash his legacy.

President Barack Obama said "History will record and judge the enormous impact of this singular figure on the people and world around him.” Canada’s prime minister Justin Trudeau expressed“deep sorrow” at Castro’s death, and British Labour Party leader Jeremy Corbyn called him a “champion of social justice.”

It will be unsurprising if Kaepernick’s popularity ratings continue to drop as they did in September when he was ranked “most disliked” player in the NFL, given his own controversial comments regarding Castro. He later attempted to clarify his comments during a press conference, USA Today reported.

“Trying to push the false narrative that I was a supporter of the oppressive things he [Castro] did is just not true,” Kaepernick said. “I said I support the investment in education, I never said I support the oppressive things he [Castro] did.” Kaepernick also said that he supported Castro’s “investment in free universal health care, as well as the involvement in helping end apartheid in South Africa.”

The NFL’s overall ratings have dropped significantly since the beginning of the season. A poll in October revealed that a major reason for that drop was Kaepernick’s and other’s protests during the National Anthem. Other polls (hereand here) revealed the same thing.

Seven WordPress Themes For Any Online…
Can You be Too Old for Entrepreneursh…
Empire of Language- Prelude-Metaphors…
You Say Covid-19, I Say Hangar 18!
“Focus on the possibilities for succe…
Read More Here