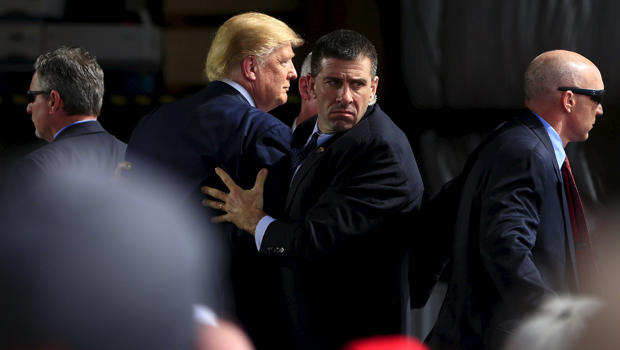 Trump’s free-flowing tweets have invited more threats than his security detail can keep pace to investigate. On top of that, he’s been telegraphing his movements for the bad guys by establishing regular travel patterns in his first 100 days in office. And his very famous family is jetting around the world, draining the resources of a bureau still gasping from the frenzied pace of the 2016 campaign.

All presidents live in a target-rich environment — agents often talk of mentally-ill people approaching the White House gates making threats against long-gone leaders like Jimmy Carter or Ronald Reagan. But law enforcement experts say the new Republican president has particularly upped his exposure levels through Twitter, with the missives emanating from his phone giving the masses the impression they can correspond directly with Trump.

I know what most of you are going to say, "Well fuck it then, if he wants to invite those kinds of threats then the Secret Service should just take a long lunch break and let events play out as they will."

However I think we all know they cannot do that, nor deep down would we really want them to.

Nor it seems can anybody pry that damn phone out of Trump's hand, which means that we are left watching millions of taxpayer dollars burned up in trying to keep Trump and his misfit family alive until at least the end of his first term.

That is of course unless one of these many investigations finally comes up the smoking gun to get this POS hauled out of the White House in chains and thrown into prison where he clearly belongs.

One can only hope.