Sarah Palin explains that she did not close SarahPAC because the funds dried up, it was because it already changed the face of American politics. 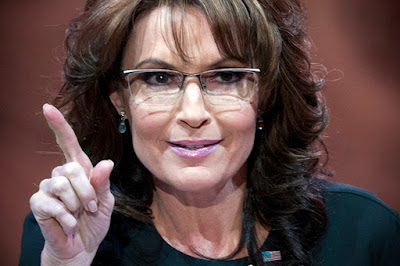 Because of your support we have changed the face of the Republican Party and American politics, so thank you! What a chapter it has been! And now together we'll write a new one. (Yep the PAC is not closing due to a lack of funds, it's because they won already!)

Anyone on the national political stage will tell you SarahPAC is different. Our team of volunteers and very few paid staffers have operated what is arguably the most unconventional but relevant and EFFECTIVE PACs in the country. (Oh Jesus, I am drowning in bullshit here.)

We didn't engage in political cronyism, didn't capitalize on PAC influence for anyone's employment or hob-nobbing opportunities, and we did not profit from the PAC. (Say what?)We "went rogue" every day for nearly eight years to prove an aspect of American politics could be clean and upright. (Unbelievable!)

Instead of conventional politicking, we strived to serve you by providing a voice for everyday hardworking patriots who knew the political status quo had to go. Our efforts utilized the platform God has graciously and inexplicably blessed me with.

It's been you - our tremendous supporters - making it all possible. (Suckers!)

Friends, our shared belief in the mission to make America exceptional again will live on, and in fact can now grow exponentially with an even LOUDER and more OPTIMISTIC collective voice. The time is right to propel this mission forward!

Stay tuned for the next steps we'll take with you as SarahPAC winds down and we leap forward into the next chapter. Let's keep living my dad's golden adage: "Don't retreat; reload!"  (Apparently that crappy website is the "next chapter." Let's call it "Chapter 11" shall we?)

And that my friends is how "alternative facts" work.

To be fair there really IS reason for Palin and her followers to believe that something has been achieved, and Palin DID have a hand in helping Trump appeal to the most ignorant, easily manipulated, people in the country.

Which ultimately helped him to "win."

However all of that talk about how "clean and upright" the PAC operated is absolutely laugh out loud funny.

As was pointed out by no less than the Washington Post, "The shuttering of the PAC coupled with the clear signal its spending sends — this was always for and about Palin — should put to rest any talk to the contrary."

As for this next chapter, as far as I can tell Palin's "next chapter" is keeping her son out of jail, keeping people from taking her grandchildren away, keeping her family's dirty little secretes out of the press.

Which may prove difficult since the judge just refused to keep Track's child custody case confidential and she no longer has the resources to pay people to be quiet.

Sarah Palin explains that she did not close SarahPAC because the funds dried up, it was because it already changed the face of American politics.