Daniel Hannan: Why Americans Should Back Brexit 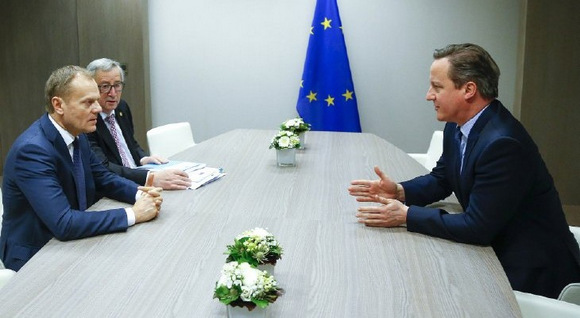 The campaign is in full swing. On June 23, Britain will decide by referendum whether to leave the European Union (EU). Most of the political establishment, including the leaders of all the main parliamentary parties, are arguing for a “remain” vote. But the country is unimpressed, and opinion polls remain evenly balanced.


In Britain, the vote is a very big deal. We have had only two national referendums before, and one of those, back in 1975, was also on leaving the EU. Those campaigning for withdrawal, including me, see it as an opportunity to restore our independence, our democracy and our economic freedom. We want to reorient Britain away from the enervated and declining eurozone toward the rest of the world. Since 2007, the GDP of China and India have both roughly doubled; but that of the eurozone, incredibly, remains the same size.

Those who want to stay in, by contrast, argue that we mustn’t take risks. In a sound-bite that they trot out in every interview — they’re very disciplined at this sort of thing — they insist that a British exit, or “Brexit,” would be “a leap into the unknown.”

Why should Americans care either way? For two reasons: first, because it touches the question of U.S.-U.K. relations; and second, because it says something about what kind of world we want.
Barack Obama sure cares about Brexit. He has been wheeled out so many times by David Cameron that he might be considered one of the leaders of the “Remain” campaign.

President Obama is no great fan of national sovereignty. He wants a world where global technocracies do things with which elected governments can’t get away. Hence his enthusiasm for international criminal courts, eco-bureaucracies and the like.

The EU is the ultimate expression of supra-nationalism. Its treaties are unlike any other international treaties because they do not simply bind their signatories as states. Rather, they create a new legal order which takes precedence over national laws. If a parliamentary statute clashes with a ruling by the European Court of Justice (ECJ), the EU’s supreme tribunal, that statute will be automatically disapplied by the courts of the state concerned.

This legal supremacy was not something to which the participating governments ever agreed. It was invented by the ECJ itself in a series of expansive interpretations in the 1960s, which even strong supporters of the EU admit amounted to a judicial coup d’etat.

The things that Obama likes about the EU — the judicial activism, the elevation of unelected officials over politicians, the soft foreign policy, the eco-correctness, the social democracy, the supra-nationalism — might, I hope, help Washington Examiner readers understand why so many Brits want to get out of it.

But if these things don’t convince you, consider the question of Anglo-American relations. “The United States needs friends in the lonely task of world leadership,” wrote Margaret Thatcher. “More than any other country, Britain shares America’s passionate commitment to democracy and willingness to stand and fight for it.”

Yup. We keep seeing the familiar line-up of Anglosphere democracies, from the two world wars to Iraq and Afghanistan. Sure, some of those conflicts may have been unwise, but my point is to illustrate the affinity of outlook that makes us act together. John Macdonald, the 19th-century Canadian prime minister, used to say that what he wanted was men who’d back him when he was wrong. That’s what friendship means.

Last year, Obama’s trade delegate, Michael Froman, said that he couldn’t guarantee that there’d be a U.S.-U.K. trade deal if Britain left the EU. The newspapers solemnly wrote up his statement as a “blow to Brexit.” But think about it. The U.S. has no trade deal with the U.K. now, because we’re in the EU. Instead of agreeing to a bilateral treaty decades ago, we have been held back by the protectionist interests of French filmmakers, Italian textile producers and others.

As for trade, so for defense. The president of the European Commission, Jean-Claude Juncker, has repeated his call for a European army. Hands up anyone who thinks that such an army would be a reliable ally in the way that Britain’s has been.

The security of the world depends, more than anyone likes to admit, on the active engagement of the English-speaking allies. Putting that alliance at risk is the true “leap into the unknown.” A return to the democratic freedoms we enjoyed until the 1990s? That’s a leap back into the known.

Daniel Hannan: Why Americans Should Back Brexit