Three Lucky things that have happened…
النباتات الصحراوية في الكويت
8 Places to Drink Coffee in KC that …
What is Conversion Tracking? How to S…
TSPSC RIMC Syllabus & Exam Pattern 20… 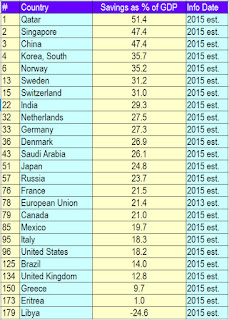 The figures are presented as a percent of GDP. A negative number indicates that the economy as a whole is spending more income than it produces, thus drawing down the national wealth.

The percentage varies among countries and is influenced by various factors such as retirement age, borrowing constraints, income distribution over lifetime, demography and welfare state.

For example, a country that pays retirement pensions generated from tax levied on people of working age will have lower savings rate compared to countries where people have to save to personally provide for their retirement.

As usual, China is among the countries with the largest savings, along with Switzerland and the North European countries, while France sits right at the middle along with the average European numbers and the US lags behind, but still manages to do better than the UK.