A Much Bigger Story Than Benghazi or Niger

Focusing on individual events can distract us from the systems that make those events more probable.

In the 1980s, the Japanese were taking market share from American and European car makers. One study at the time found that German car makers were reaching the same level of quality as the Japanese but needed three times as many employees to do it. Some German car makers were employing as many people at the end of the line to fix cars as some Japanese car makers were to work the line. When Japanese workers encountered an error they had authority to shut down the whole line and initiate an investigation into why the error had occurred. Rather than just fix the error at the place, they might change the upstream flow of work to lower the probability that someone would make that error again. Japanese workers were regularly fixing the system while Germans were regularly fixing cars.

health benefits of almonds
Karen Wiesner: I Have Dreamed a Littl…
CoinMENA Raises $9.5M Seed Fund
5 things to look for when shopping fo…
Les Paul’s “Number One” Guitar On Dis…
Which brings me, curiously enough, to stories about our military. Right now, media and politicians are focused on the Story of how four soldiers were Killed in Niger. This is very similar to the focus on the four dead in Benghazi in 2012 and this focus on individuals misses a more important story about policy, the system that makes these tragic events more or less probable.
First of all, let’s assume for a moment that anyone killed in service to our country deserves honor and their families deserve acknowledgement and gratitude. Let’s further assume that whether or not they died in an incident that got an enormous amount of coverage, their families are equally shattered by this loss. Whether they were the only one killed that year in service to their country or one of 2,000, the trauma and grief their families suffer is real and they deserve our support.
Stalin was quoted as saying, “One death is a tragedy and a million is a statistic.” Perhaps it is because we can’t comprehend 2,000 deaths as easily as we do 2, we are made numb by the bigger Number and saddened by the smaller. The media is currently gripped by the story of Myeshia Johnson, the pregnant widow of La David Johnson who received a phone call in which Trump’s offer of comfort included the phrase, “He knew what he was signing up for …” Yet a much bigger story is playing out here that is obscured by the odd way the media fixates on a Benghazi or Niger but ignores the bigger story about how many widows and widowers are experiencing what Myeshia Johnson is.

If you appreciate the tragedy of Chris Stevens death (he was the ambassador killed in Benghazi) and the grief of Myeshia Johnson, you have to be humbled by the thought of losing more than a thousand soldiers a year. Between 1980 and 2010, an average of 1,575 American military were killed each year. Each year. During that time the lowest it ever dropped to was 796 (that was in 1999) and it rose as high as 2,465 (in 1983). In only six years during that 31-year stretch did the number killed drop below 1,000. (1996 to 2001.)
Each death involved a real person and deserved its own story but our policy made the number killed each year remarkably consistent. Policy was the bigger story than any one of those deaths because it was policy that made the number of those deaths so remarkably consistent for so long.
And then the most remarkable thing happened. The number killed steadily fell. In 2010 the number killed was 1,485. Then, in 2011 467 died. In 2012 it was 314, 2013 was 132, 2014 was 60, 2015 was 28 and then in 2016 it was 30.  30 is 2% of what it averaged from 1980 to 2010.
It’s not true that each of these numbers are mere statistics. We aren’t equipped to comprehend 1,575 grieving families and all their friends. We can scarcely comprehend one. But the limits of our empathy shouldn’t excuse the obvious: a year in which 2,465 of our military are killed is 82 times worse than a year in which 30 are killed.
Obama deserves criticism for reneging on his threat to intervene in Syria. His decision not to send in American troops may have resulted in more civilian deaths in the last few years. But Obama also deserves respect for his decision. For one thing, he couldn’t see the next move. Who takes power once Assad is out and how does that lower the number of casualties and refugees? (Not only did our invasion of Iraq result in somewhere between 100,000 and a million Iraqi deaths, it created millions of refugees. Attacking a country doesn’t guarantee a fall in casualties.) It is not clear whether his decision to keep troops out of Syria resulted in more Syrian deaths. 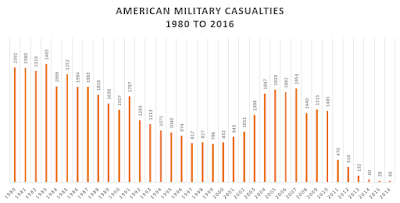 It is clear that during Obama’s last six years our American troops were safer. Only a fraction of the number who would have died with previous policies died during his last six years in office. This deserves more attention than it has received. Had our service people died at the same rate in Obama’s last six years as they had in the 31 years prior, 8,418 more of them would have been killed. 8,418 grieving families and their friends. 9 times more grief and tragedy than actually occurred. This is not just a statistic. It is not just a story. It is 8,418 life stories that get to be told in radically different ways. And it is not just their stories. It is the stories of their children who get to grow up with both parents. Or the story of the children who were born because a mother or father lived well past the date they would have if they had been deployed under the policies of a president more eager to put boots on the ground.
Progress doesn’t come from fixing each tragic event after it happens. Progress comes from making changes to the system, or in this case to the policies that determine how our troops are deployed.
Foreign policy that spares the lives of 8,418 soldiers may not seem as gripping as tragedies that take the lives of four but they matter more. If we’re going to be factual about it, they matter 2,000 times more. That, it seems to me, deserves at least as much attention as a tragedy in Benghazi or Niger.
--------------
Data sources on military casualties are harder to find now. Sites that formerly posted data now yield up an error. Here are the places I went for data months ago and just this week.

A Much Bigger Story Than Benghazi or Niger