Race, Religion and the Media: Are We Numb To Terrorism?

If I ask you to think of an example of terrorism, what springs to mind?

Is it in numerical format?
9/11. 7/7. These roll off the tongue with ease alongside their haunting rhyme.

Is it a specific named event in the Western world?
The Boston bombings perhaps. The Charlie Hebdo killings. The February 2015 Sydney Raid. The November 2015 Paris attacks.

Can you condense it down to a single word or acronym?
Iraq. Nigeria. Egypt. Turkey. Pakistan. ISIS. IRA. It is as if these have become taboo, or synonymous with certain ideas and expectations...

It should be stated the above list is clearly by no means exhaustive. But in the wake of a week which has suggested worrying patterns involving gun crime, race and murder in the USA, I think it is useful to stop for a moment and consider. If you'll pardon the pun, this week people have been up in arms over the killings in the States. And rightly so.

But while this complex topic is buried under layers of ethnic origin, oppression, prejudice and more, it has sparked a debate among probably millions of people. People who are opinionated, and happy to be. The Dallas shootings have been described as an act of domestic terror. With that and the subsequent debate in mind, I want to ask a question:

Are we becoming numb to certain acts of terror?
Let us for a moment consider.

Say you're listening to the radio, and the newsreader informs you that a car bomb goes off in Baghdad, killing 30 and wounding dozens more. Do you take the time to think about the impact in that community? The families of those murdered? What it must be like to live somewhere which that is a real daily threat? Or does it wash over you, due to years upon years of exposure to identical stories?

If the event remained the same but the location changed, I argue it would not be empty rhetoric. A car bomb explodes in London, killing 30 and wounding dozens more. How do you feel? Did you know someone there? Were you there yourself? Did you see the destruction? I'd be willing to bet that it wouldn't wash over us in the same way.

I was recently supposed to be visiting Lebanon for a holiday. Days before we were due to fly, I googled Beirut only to discover a car bomb had exploded in the city, destroying a local bank. Luckily, nobody was killed. But it got me thinking: why had I not heard of this? Why was there no awareness? If my boyfriend and I had been hit by that explosion, or even in the vicinity, would our friends and family have even known to contact us to see if we were alright? Sadly, I believe the answer to the first two is because it is Beirut. It is not New York. It is not Paris. It is Beirut.

Logically, if an attack or incident occurs near you or somewhere you have been, it is going to feel more real. More likely you could have been involved. Scarier. Conversely, if there is a feeling that survival is secure enough, then it can be taken for granted. This is called the existential security theory.

EXISTENTIAL SECURITY THEORY AND RELIGION:
We live in a fairly secular society here in the UK. Clearly, many (though by no means all) terrorist attacks are religiously motivated. The figure below illustrates an interesting relationship between feelings of existential security and religious values, taken from a paper by Norris and Inglehart, notable sociologists. Those people living in societies where their security is threatened are more likely to, in turn, follow a religion. 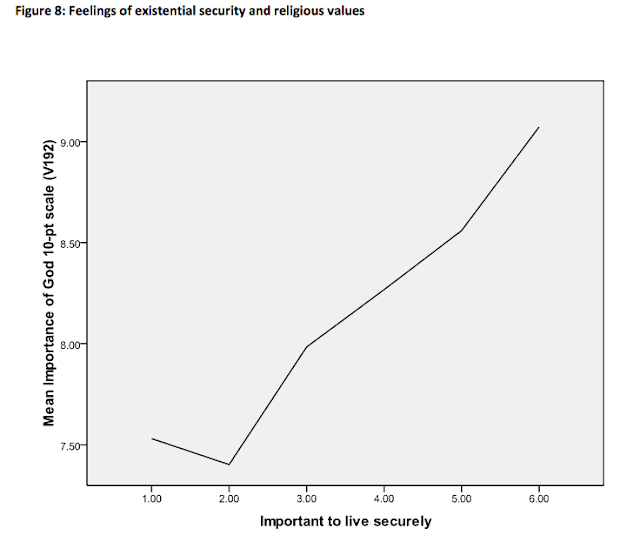 Norris and Inglehart conclude:
"...the world as a whole now has more people with traditional Religious Views than ever before ‐‐and they constitute a growing proportion of the world's population. The social and political divisions between those with religious and secular values, beliefs and identities are thus expanding – leading to some of the political tensions observed today in contemporary Europe. But it would be mistaken to conclude that this means that religiosity is strengthening in secure post‐industrial societies, or indeed that these long‐term developments will necessarily lead to growing conflict. If security is the driver of secularization, as we believe, then expanding human security through enabling the capacity for sustainable development around the world, and also strengthening economic equality and welfare safety nets within societies, are the keys to reducing tensions over religious values."
ARE WE TO BLAME FOR FEELING MORE STRONGLY ABOUT SOME EVENTS THAN OTHERS?
Outlined above, it is then the economy, welfare and Sustainable Development that are arguably what need to be addressed worldwide. And coming from a welfare state which is fairly economically stable (shh! Don't mention Brexit) and is also a developed country, is it particularly surprising that we cannot imagine what it must be like to come from somewhere that isn't? That does not mean we shouldn't try. But I think that some terrorist attacks hit us harder than others and we should not be ignorant of this. Because at the end of the day Every. Life. Matters. Regardless of location, ethnicity, religious views of victims or perpetrators, or anything else.
This post may be by a Brit, but it doesn't mean we don't feel the impact of what's going on in the US right now. And for those campaigning at the moment for #BlackLivesMatter, I salute you.

Race, Religion and the Media: Are We Numb To Terrorism?