How To Find A Bomb Lab Using Drones

...neighbors had complained about a suspicious chemical smell coming from the building.

Excerpt from an article about the recent airport attack in Turkey

Her squadron had a unique mission. At this point she and her friends were operating eighteen Drones all over the metro area. Each drone was recently fitted with 4 unique sensors, capable of smelling out labs where they make bombs. The tiny sensors processed a small stream of the surrounding atmosphere. GPS coordinates for each sample were automatically plotted. The little devices even cross-check results against each other for accuracy. 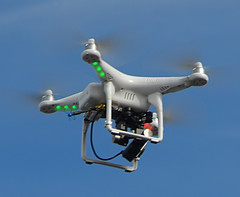 Her squadron had a unique mission. At this point she and her friends were operating eighteen drones all over the metro area. Each drone was recently fitted with 4 unique sensors, capable of smelling out labs where they make bombs. The tiny sensors processed a small stream of the surrounding atmosphere. GPS coordinates for each sample were automatically plotted. The little devices even cross-check results against each other for accuracy.

Her latest interview with a reporter went like this:

“You must get quite a few false alarms, huh?”

“Not really, not for the large areas we cover. Remember these sensors and drones were tested over the exact same type of operation the bombers use. They are configured to look for three specific chemical traces. Each is specifically associated with the bombs currently being used.”

“So what happens when one of the drones detects something? Has that even happened?”

“Oh, we’ve detected eight real labs with this same equipment, but that’s because it is being used in many places all over the world. The deployment here in Istanbul just started a few weeks ago. Governments are pretty antsy about letting these larger drones buzz all over the city. It is not unusual to have people shoot at them.”

“Has one been shot down?”

“No, they are a small target flying fairly high up, a hundred feet or more. Plus we keep ‘em moving fast.”

"Can these drones shoot at bad guys, like the one's in the movies?"

" These civilian drones are larger and more expensive than the one pictured but they are not weaponized in any way. No Hellfire missiles. "

“I guess they would be tough to shoot down. Are you filming too?”

“The drone camera is always on, that’s how the pilot sees where it is going.”

“Oh, yea, but do you save that video stream?”

“Yes, of course, video is essential when we get a positive read from one of the sensors. We send in one or more drones to look closer, to pinpoint the source.”

“What about privacy? You must be peering into people’s back yards with those hi-res cameras.”

“The video feed, along with all the results, are kept very secure. Nobody looks at 99.9% of the images. Really we only look at the video when we get a positive result from one of the drone’s chemical sensors.”

“It used to be, until I found a way to use distributed computing, in real time, to process all the incoming data. Now we can canvas a large city in a week or two. We repeat the survey once each month. Out of 26 cities we’ve found 8 labs.”

“Wow, that’s great! Sort of. What’s the cost of this program?”

“What’s the cost of a bomb going off in one or more crowded markets or airports? I don’t mean to ridicule your question but the alternative to detecting these labs in anarchy and mayhem.”

“Understood. So how much?”

“It is amazingly cheap. Most of our drones are flown by owner-operators. This provides good jobs locally. Our city partners really like the local staffing. They bring a suitable drone, we clear and train them. We also mount the sensors on each drone for them.”

“What if one of your drone operators goes to over to the Dark Side? They could avoid their buddy’s car bomb factory, for example.”

“We considered that. Each operator actually doesn’t immediately know if their drone has detected something. We detect and raid labs before the drone operator ever knows. They do get a bonus later. Plus they get paid for court appearances when they prosecute the bombers.

There’s another way we would know if someone has decided to work for the likes of Darth Vader or a Sith lord. All the drones are configured to be part of an array. Each operator has to follow in a flight plan determined by us. They can avoid obstacles but they have to stick to a set route. We survey all areas, industrial and residential.

The data is stored in the drone and but also immediately sent over mobile broadband and processed in real time. If there is poor mobile phone service where the drone is flying it sends us the data later, when the connection is better.

Each sensor must send actual readings or the drone returned for service. They don’t get paid if the drone is not constantly conducting the survey according to the flight plan. The distributed processing brings the cost to analyze the data down too. Essentially we just want to map out all the chemical signatures that match what we are looking for.

We charge $150,000 per survey and invest most profits back into the operation. We are clear with each city partner about this. Detecting a bomb factory in Yemen helps protect New York and Paris too. "

"This is going to sound odd but can you detect drug labs too?"

"That is not our mission but production of certain illegal drugs, like methamphetamines, involves very explosive chemicals. Some of the same materials are used in bombs. When you think about it, an illegal drug lab like that is just as dangerous to society."

“You didn’t answer the question.”

“We are not in the business of looking for illegal drugs, period. Just things that blow up. We report our finding to the people that pay us, the local authorities. That’s all I’m going to day about that.”

“OK, OK, I get it. Two more questions, do these drone operators need to work under where the drones are flying and is your firm hiring people now? "

“The drones we are talking about are designed to fly up to 15 kilometers from the control source. Additional instructions can be sent to the drone though a mobile phone connection if it flies out of signal range.

Operators must be licensed and work in the same city and sometimes they can even work near home. Most work up on a high rooftop or from higher ground. We are always hiring owner-operators in the cities that use our service regularly. Some cities request regular monthly surveys, some we only do quarterly. Or just once. We are also hiring full time operators and support staff. We expect to grow to 500 people this year.”

“Is that very effective?”

“We found two labs in just the first survey of a particularly bad region in western Syria."

Mbappe is capable of marking an era at Real Madrid – Emery

How To Find A Bomb Lab Using Drones