Thief Caught By Tattoo Artist, Gets His Forehead Inked with ‘I am a thief’ (Photos)

A teenage ‘thief’ has been subjected to a lifetime humiliation after a Tattoo Artist caught him and inked his forehead with ‘I am a thief’. 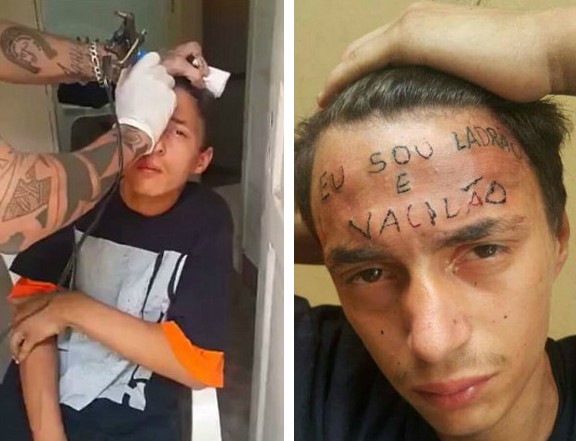 According to reports, the artist, Maycon Wesley from Brazil, caught up with the thief – who had allegedly stolen a bicycle from a man with just one leg – sat him on a chair and scribbled the damning words on his forehead.
The full words, written in Portuguese are:

‘Eu sou ladrão e vacilão, which translates to ‘I am a thief and a loser’.

He recorded the damning punishment and he cheekily asked if the embarrassed teenager liked it.

DailyMail reports that the young boy’s family  saw the video of the inking which has been widely circulated online and reported the artists to the police.

Police has since arrested Wesley and his friend, Ronildo Moreira de Araujo – whose voice can be heard in the video – on Saturday and charged them with torture.

Local reports say that the boy went missing after the incident, which happened on Friday.

Wesley and Araujo claim that they released the boy, adding they they do not know his whereabouts.


This post first appeared on MediaCabal, please read the originial post: here
People also like
How To Make A DIY Nature Mandala Craft
Money Cart 2 Slot Review (Relax Gaming)
2021 MacBook Air to Come in iMac Inspired Colours
Why I Chose to Be Vaccinated Against COVID-19
Smart Tips on How to Get More Likes on Your Instagram Posts
Library Street Collective, Detroit
Music Profile: Crissi Cochrane - Soul Singer Songwriter - Ontario, Canada | SRL Networks London Music PR
11 Ways to Use Content Marketing in Every Stage of the Sales Funnel
How to Organize a Blog Post and Structure It Well

Thief Caught By Tattoo Artist, Gets His Forehead Inked with ‘I am a thief’ (Photos)