The prophet was arraigned on a count charge of unlawfully having Human Skull in his possession.

‎The prosecutor, Sunday Ogunremi said the accused on 5 May, 2017 at Sango road, Ibadan magisterial district, did unlawfully have in his possession one human skull.

8 Signs You Should Avoid That Potenti…
10 Health factors that you can improv…
IBM Takes The Wraps Off World’s First…
How to Tell if You Have Bed Bugs?
A Furry’s Guide to Cryptocurrency 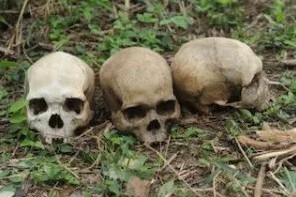 ‎
According to the prosecutor, the offences contravened sections 329(A) Criminal Code, Cap. 38, Vol. II, Laws of Oyo State of Nigeria 2000.

‎Meanwhile, the accused, in his confessional statement, told the police that he is a prophet at the Cherubim and Seraphim (C & S) Church in Lagos, but that he learned machine repair job, but did not complete his apprenticeship before his friend lured him to join the pastoral job.

In his confessional statement, the accused allegedly told the police: “I use the horn to control people that come to me for prayers in order to collect huge amount of money from them. I got the human skull from a particular area of Lagos when they brought bulldozer to bulldoze the street. I took it from there for personal use because I know it will be useful for me. I was arrested on my way to Ibadan from Lagos at a checkpoint. I was in the public transportation when the police stopped our vehicle and started searching our bags before he was caught”.

In his ruling, Chief Magistrate Abiola Richard granted him bail in the sum of N75, 000 with two sureties in like sum.

One of the sureties must be a Level 8 civil servant while the other must be his blood relation with the National Identification card.

She adjourned the case till June 28, 2017 for further hearing.


This post first appeared on MediaCabal, please read the originial post: here
People also like
8 Signs You Should Avoid That Potential Employer
10 Health factors that you can improve with Delta 8
IBM Takes The Wraps Off World’s First 2nm Chipset
How to Tell if You Have Bed Bugs?
A Furry’s Guide to Cryptocurrency