FA Cup semi-final draw: Find out who your team play 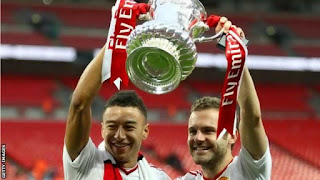 Chelsea knocked out holders Manchester United in a hard-fought 1-0 win on Monday, with Spurs thrashing League One side Millwall on Sunday.

Manchester City are playing in the semi-finals for the first time in four seasons after beating Middlesbrough in a 2-0 away win.

FA Cup semi-final draw: Find out who your team play