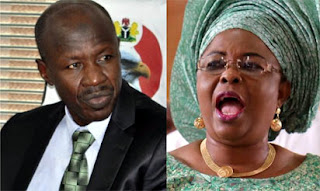 
Justice Mojisola Olatoregun on April 26 made an interim order forfeiting the money to the Federal Government.

It said the money, which she allegedly directed her aides to pay into her account while her husband was President, was suspected to be proceed of unlawful activities.

It prayed the court to order the temporary forfeiture of the remaining sum to prevent her from further dissipating it.

Justice Olatoregun directed the EFCC to publish the interim order in a newspaper to enable any interested party to appear before the court within 14 days to “show cause” as to why a final order of forfeiture should not be made in favour of the Federal Government.

Mrs. Jonathan’s lawyer Mr. Ifedayo Adedipe (SAN) yesterday urged the court not to order a final forfeiture of the money.

Hs said his client was not given sufficient time to “show cause”.

Adedipe said he had filed a notice of appeal against the court’s ruling as well as a motion for a stay of proceedings.

He argued that the EFCC ought to have waited for the Court of Appeal to determine the case.

Adedipe noted that the publication of the court’s order was done on May 11.

According to him, the notice was too short to allow for the filing of any response.

EFCC’s lawyer Mr. Rotimi Oyedepo said the business of the day was for any interested party to appear and show cause.

Justice Olatoregun noted that the suit would only be adjourned on the grounds that the time-frame of the publication was short.

The commission said it found the money in an account numbered 2110001712 with Skye Bank Plc in Mrs. Jonathan’s name.

Justice Olatoregun had also ordered the temporary forfeiture of N2,421,953,522.78 found in an Ecobank Nigeria Ltd account numbered 2022000760 in the name of La Wari Furniture and Baths Ltd.

The commission said the money is also linked to Mrs. Jonathan.

EFCC said the sums were “reasonably suspected to be proceeds of unlawful activities”.

Justice Olatoregun adjourned to May 22 by which time any interested party would have filed the requisite responses to claim the claim.