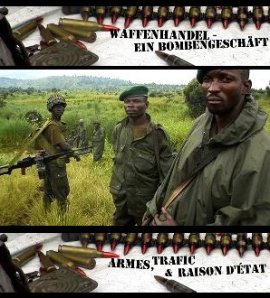 As a study release by  the Stockholm International Peace Research Institute (SIPRI) early this year (see here) shows, the arms industry has been making more money than ever before in history.  Citing www.controlarms.org:

Each year, at least a third of a million people are killed directly with conventional weapons and many more are injured, abused, forcibly displaced and bereaved as a result of armed violence. In armed conflicts, the lives of skilled people are lost, infrastructure such as schools, clinics and homes are lost; economic production and markets disappear and investment takes flight. Even outside wartime, government arms purchases can exceed legitimate security needs, diverting substantial amounts of money away from health and education. In ‘peace time’, the presence and availability of arms often intensifies violence engendered by political protest, disputes between neighbours, crime and violence in the home.

Thanks to hundreds of NGOs the UN member states are now working on an Arms Trade Treaty.