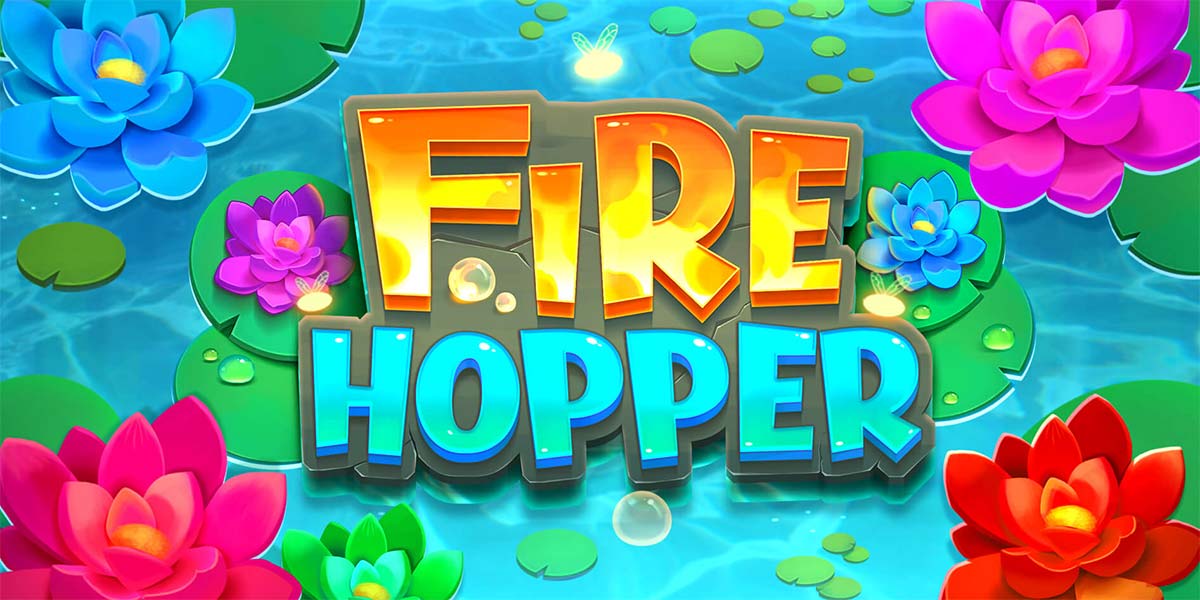 We Take a Wild Leap Into the World of the Crazy Fire Frog in Push Gamings New Fire Hopper Slot!

Fire Hopper is the latest slot release from Push Gaming scheduled for release on the 7th of December 2021, following in the footsteps of the grid-based crazy multiplier action seen in previous slots such as Jammin Jars 2, this time.  In Fire Hopper, you can expect a more peaceful and tranquil setting with lotus flowers and a pond setting, but the same crazy multiplier action.

A majestic Fire Frog runs the show on this slot. As it consumes Fireflies, it ignites changing colour and leaves behind a trail of golden wins as it leaps across the pond.

Expect a few novel twists to the popular grid-based action on this machine, but expect multiplicative multipliers too that can boost wins up to a staggering 50,000x stake level.

Fire Hopper might look like a cutesy cartoon themed slot, but the maths behind it is anything but this. It is volatile, has high variance and packs a real punch in the bonus feature. 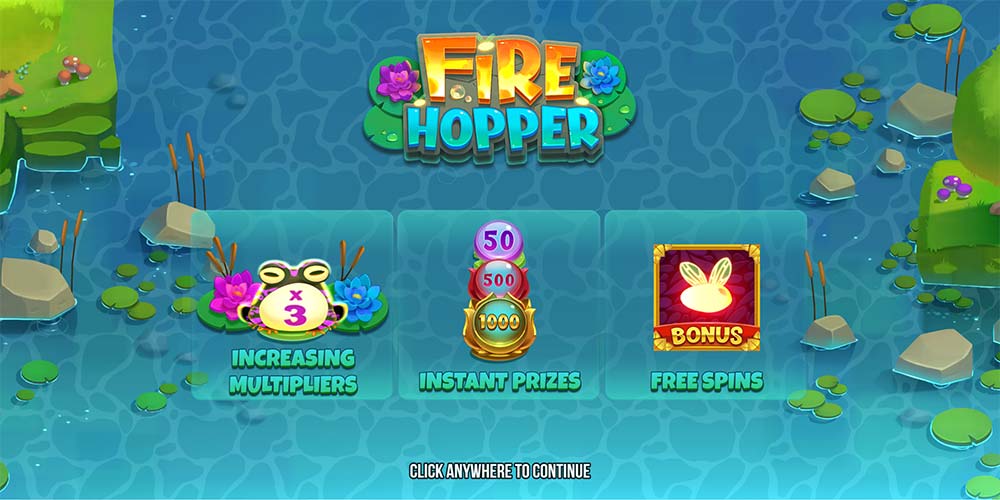 The base gameplay in Fire Hopper takes place in a 7x7 grid. The backdrop is a tranquil pond with a mix of lotus flowers making up the grid of paying symbols.

There are no paylines as such on this machine. Instead, this machine uses a Cluster Pays system of matching coloured symbols to create wins, with five or more clustered symbols required to form a win.

Cascading wins are also included here, so new symbols drop into the grid from the top of the reel set when wins are formed.

The bigger the cluster of symbols, the larger the rewards, with the red lotus flower acting as the regular premium symbol. However, the main focus on this peaceful slot is the Fire Frog, who serves as a wild symbol but will also hop across the grid and interact with other symbols creating multipliers and triggering the bonus round. 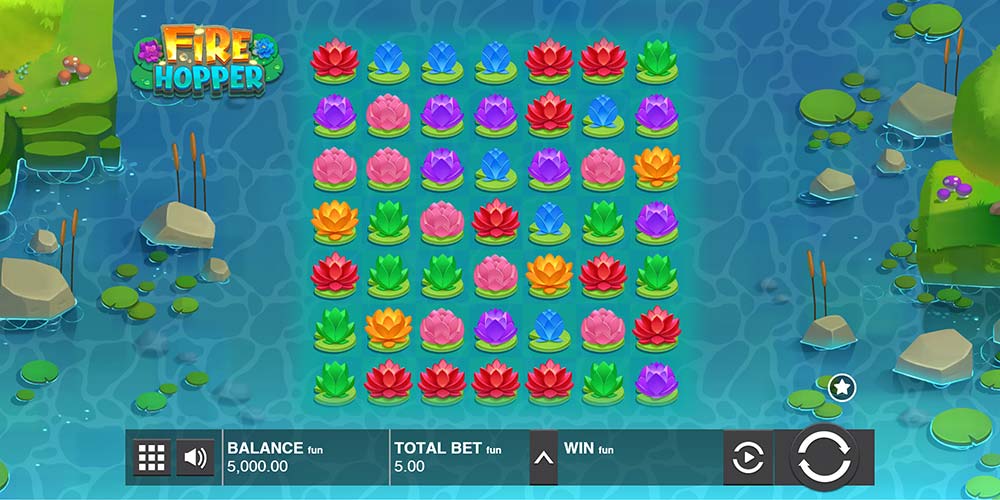 The Fire Frog is the crucial symbol on this machine. Several extra symbols, such as Coin Prizes, Firefly Wilds and Firefly Bonus, will only get activated when the Fire Frog appears on the grid and interacts with them.

The Leaping Frog feature activates when any of these extra symbols and the Fire Frog are visible on the grid, leaping to collect these features leaving behind a Golden Fire Frog, which acts as a wild and raising the Multiplier value of the Fire Frog.

This leaping mechanic will occur several times when multiple special symbols are on the reels and provide a nice boost to base game wins, particularly for the Coin Prize based rewards. 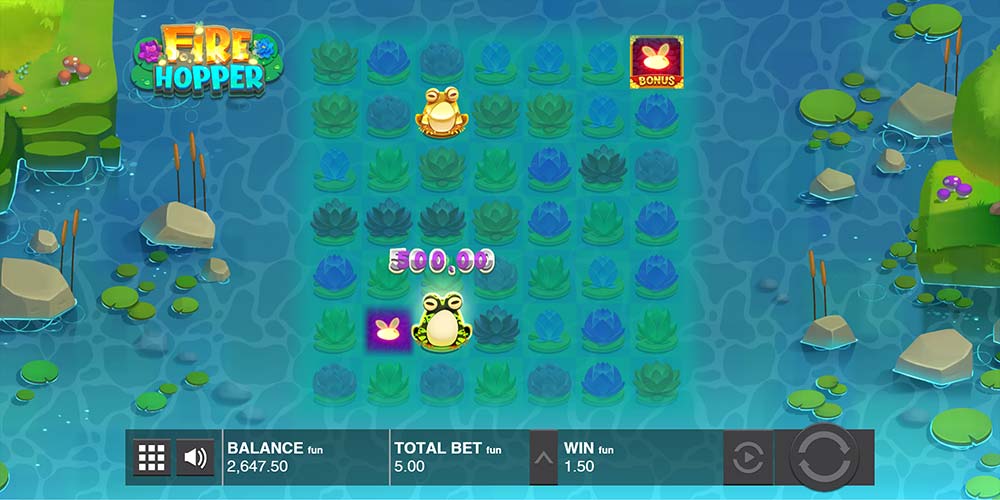 The bonus round trigger requires two of these key symbols, the special Firefly Bonus symbol and the Fire Frog, to appear on the grid simultaneously. This will trigger the bonus round after all winning combinations have been paid out.

There is a hefty reliance on multiplier values on this machine, so this Leaping Frog feature can act as a nice boost to the bonus round before it has even started. 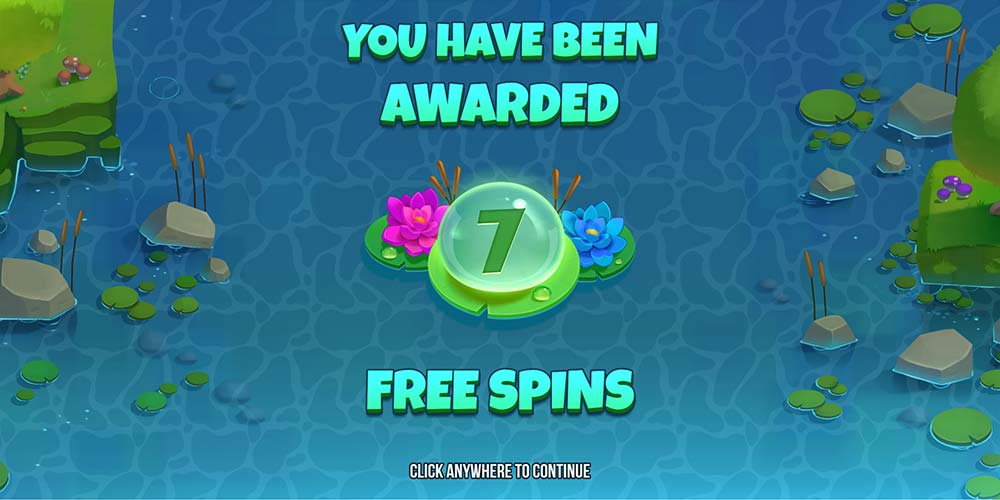 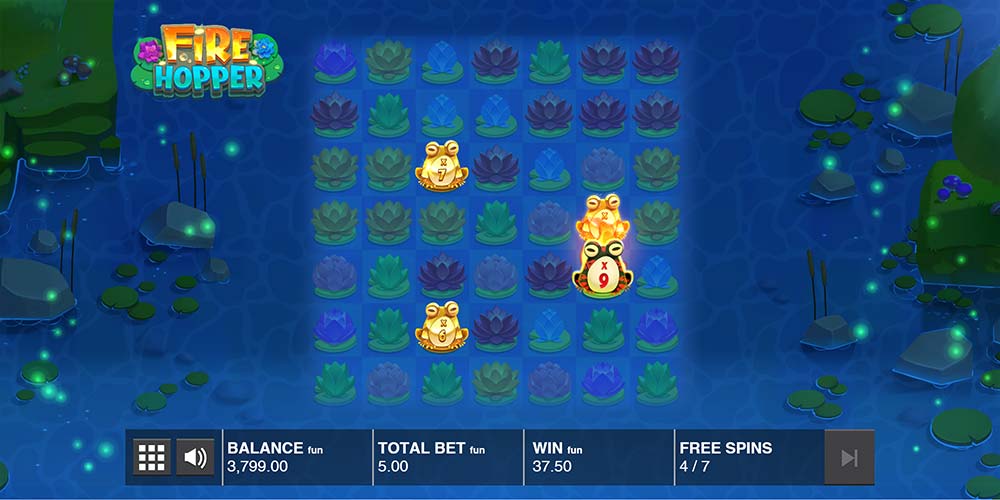 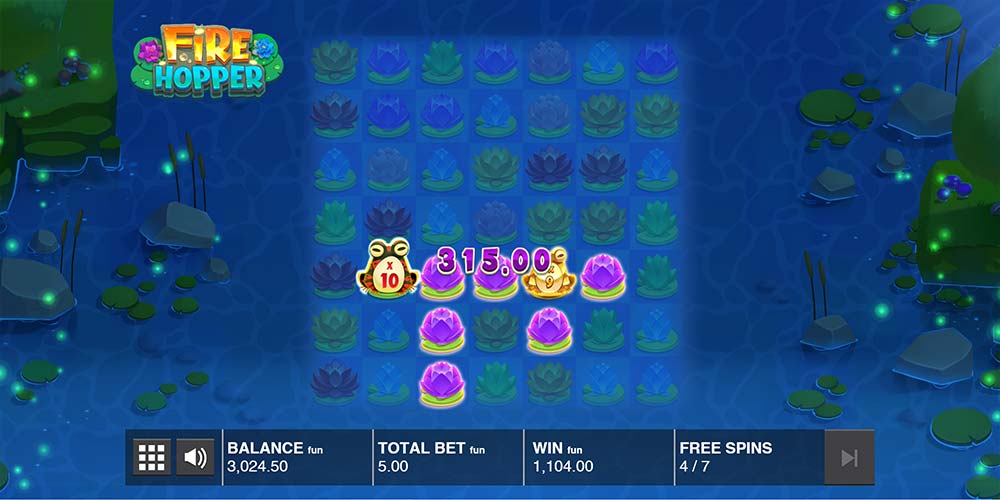 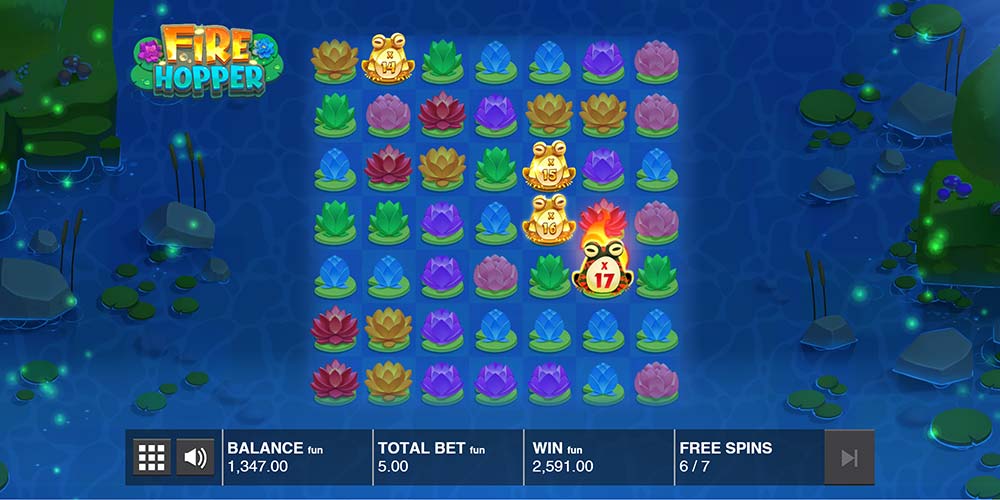 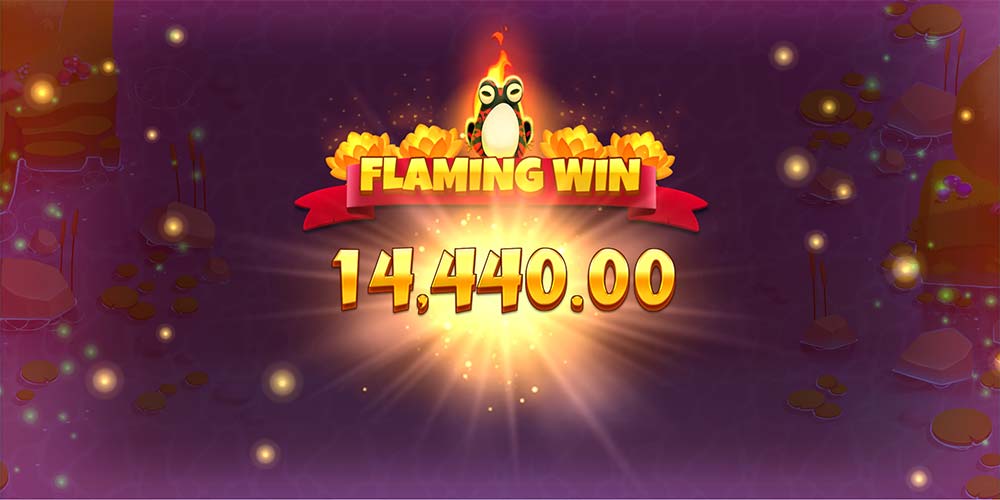 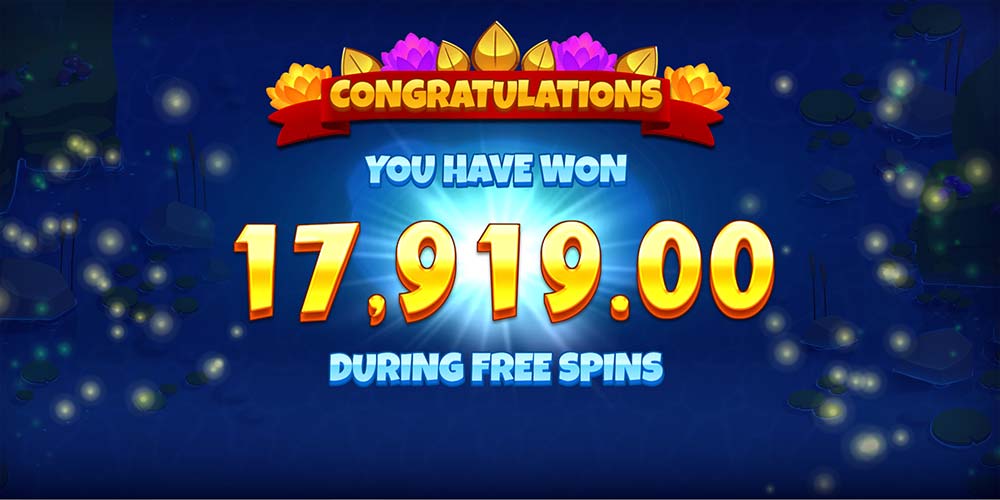 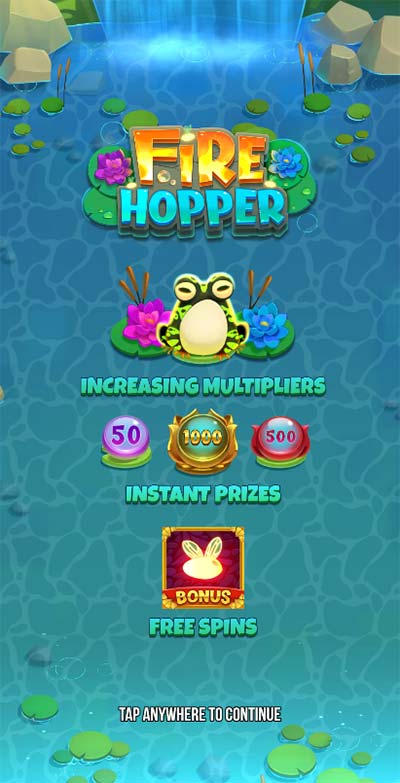 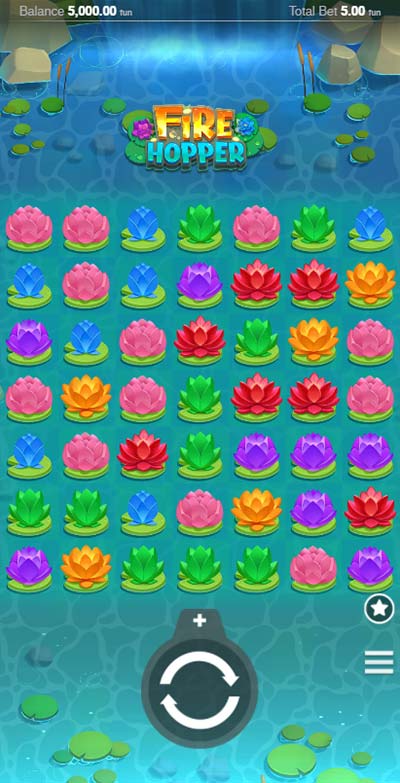 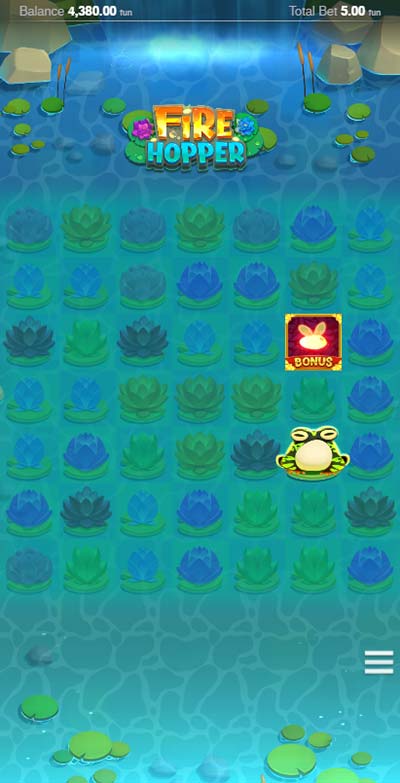 This means the Multipliers can quite easily reach 10x and, on occasion, levels much higher than this value. From there, it is literally hoping for a cluster of 2 or 3 wild multiples to form a cluster win to produce some spectacular hits. 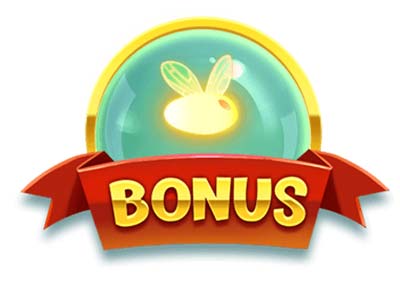