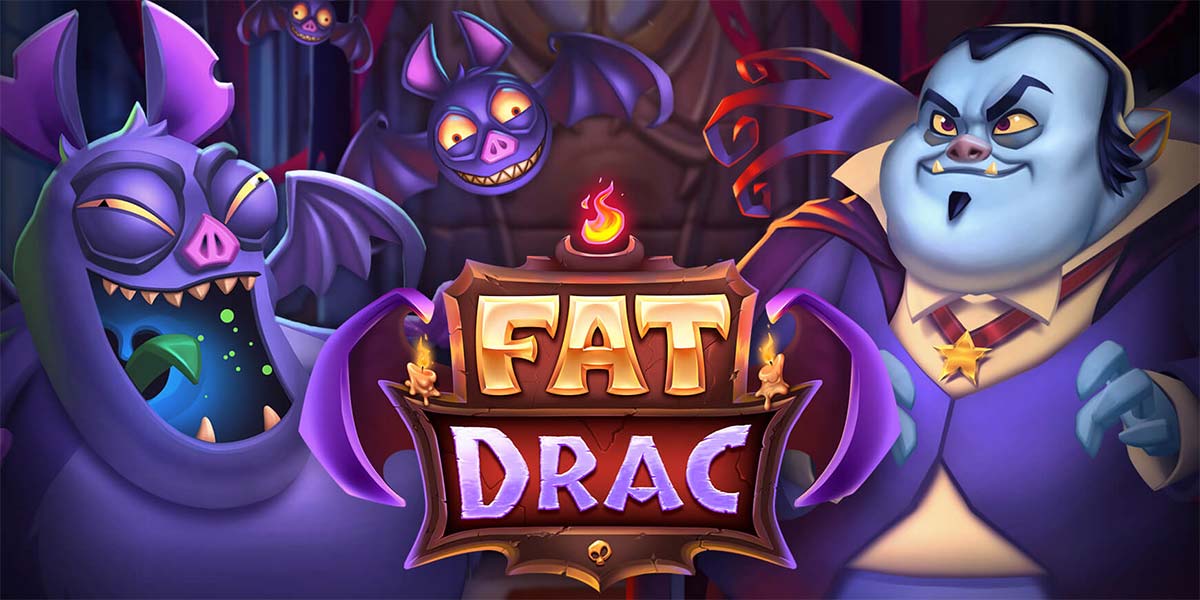 We Sink Our Teeth Into the Vampire Themed Fat Drac Slot! The Third Push Gaming Release in Their ‘Fat Series’

Get ready to sink your teeth into the 3rd in the Fat Series of Push Gaming slots as Casumo Casino will be adding the vampire-themed Fat Drac slot to their casino in time for Halloween on the 14th of October 2021.

The original Fat Rabbit and Fat Santa slots were both very successful and popular games for Push Gaming. The main feature, a unique enlarged wild symbol, could grow (get fatter) to cover the entire screen in the final stages of the bonus round.

A few new twists to the gameplay with lots of new mini-features added that will be covered in-depth later, a significant increase in volatility in this latest version, with maximum wins increased to a massive 50,0000x stake!

The core gameplay remains reasonably faithful to the original, but there are certainly some sacrifices to how the features now work, particularly the main "fat" symbol, which may disappoint players.

However, the visual look and overall theme are much improved with a cartoon-styled, vampire/Dracula/Halloween themed design, with fantastic sound effects and animations such as the Fat Bat "tease", which outshine the previous versions entirely.

If you are looking for a visually stunning slot, then you have found it right here! 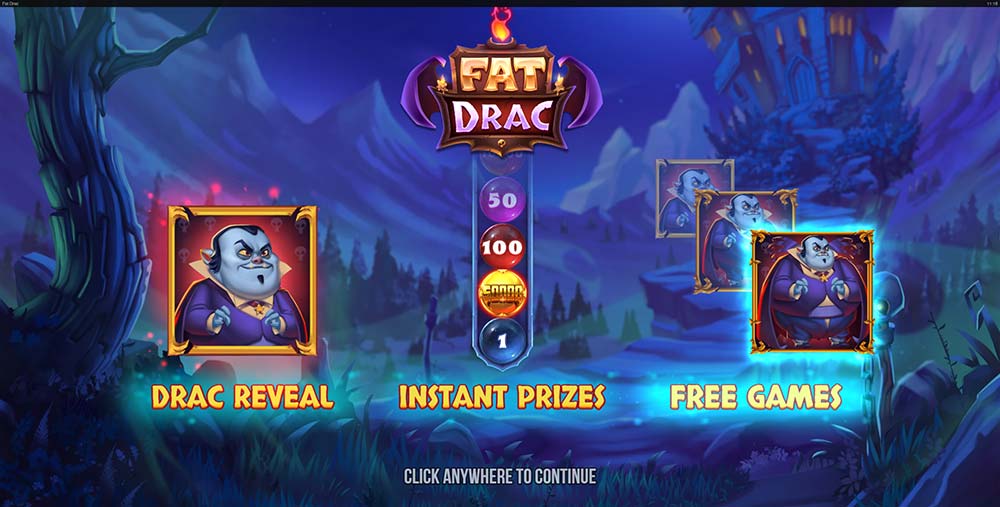 The base gameplay in Fat Drac uses the same familiar 5x5 grid layout with 40 fixed paylines. In terms of features, you have the new addition of Instant Prize Bubbles which are presented to the left of the reels.

The instant Prize Bubble values are based on the current stake size. While most of these are pretty low in value (1x, 2x), they can sometimes appear as much higher values, such as 50x, 100x and even 1000x right up to 50,000x! These prizes nudge by one position with every spin, so once visible, you have a limited window of spins to actually win them. 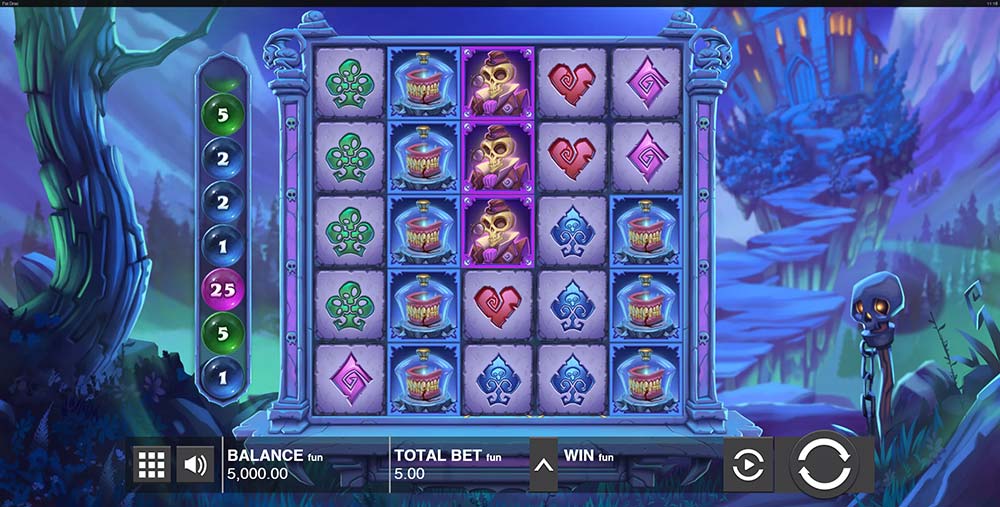 These can be won in various ways, including the Coffin Pick Feature, which tends to award 1-4 picks from the current instant prizes, as well as the Fat Bat feature which will award all of the currently visible Instant Prize Bubbles on the screen once triggered.

Generally, this feature keeps the base game ticking over nicely, awarding some decent wins whilst hoping for a bonus trigger. The Fat Bat feature can be a complete tease taking several trips across the screen before actually triggering and awarding all of the instant prizes.

The larger instant prizes, certainly the ones over 100x in value, are much rarer as you would expect, and you will also need some interactions from either of these features to actually win them, and not just watch them slowly cycle through the Instant prize bar. 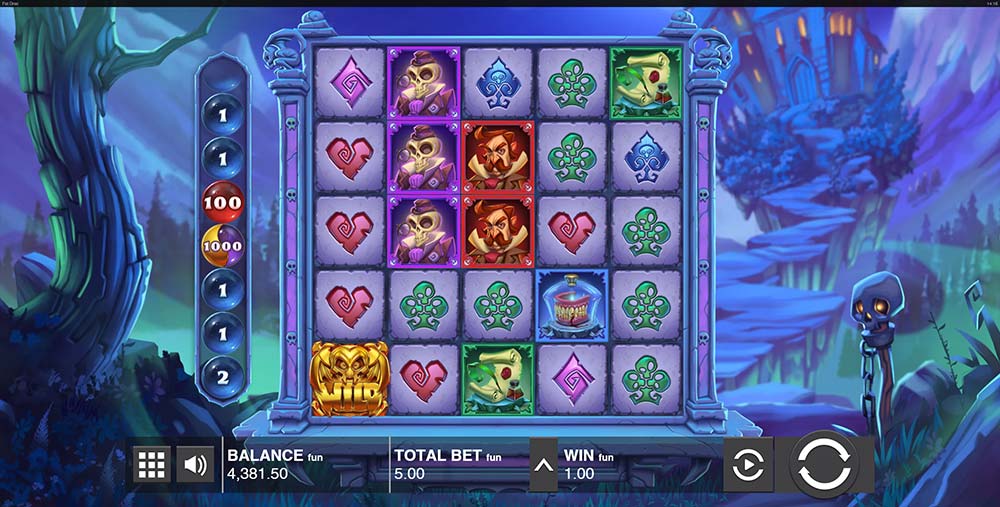 The main focus in the base game is the Fat Drac symbol, which can appear on the first reel. This symbol is required to trigger the main free spins bonus round, in addition to at least one of the Blood Goblet scatter symbols.

The Fat Drac symbol can also act as a reveal symbol and reveals bats that fly out and award the instant prize bubbles. During the bonus round, there are some excellent interactions possible with featuring given that Drac because Fat, and this symbol can, as a result, reveal lots of bats!

Additional blood is always good for a Dracula themed slot, and triggering the bonus round with more will ensure that Drac, in this case, gets a headstart in getting just a little bit fatter sooner! 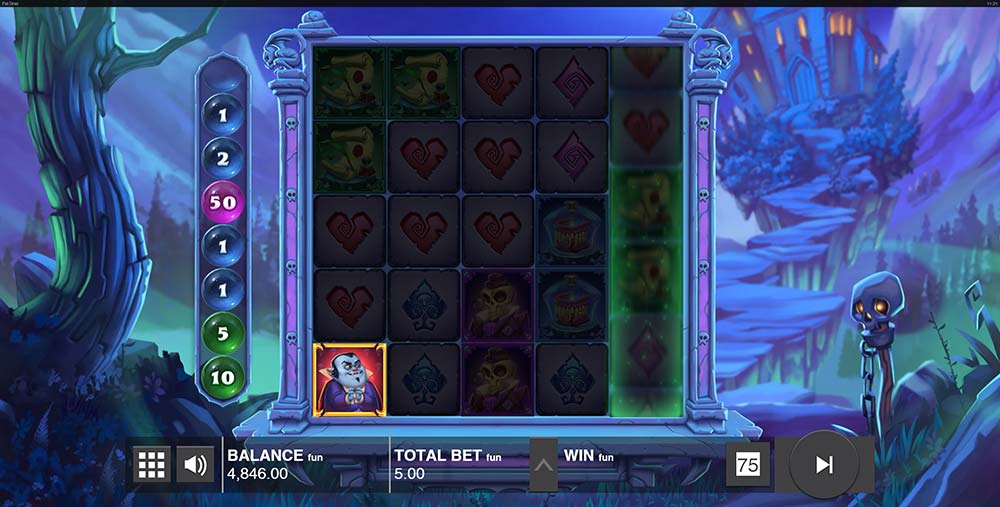 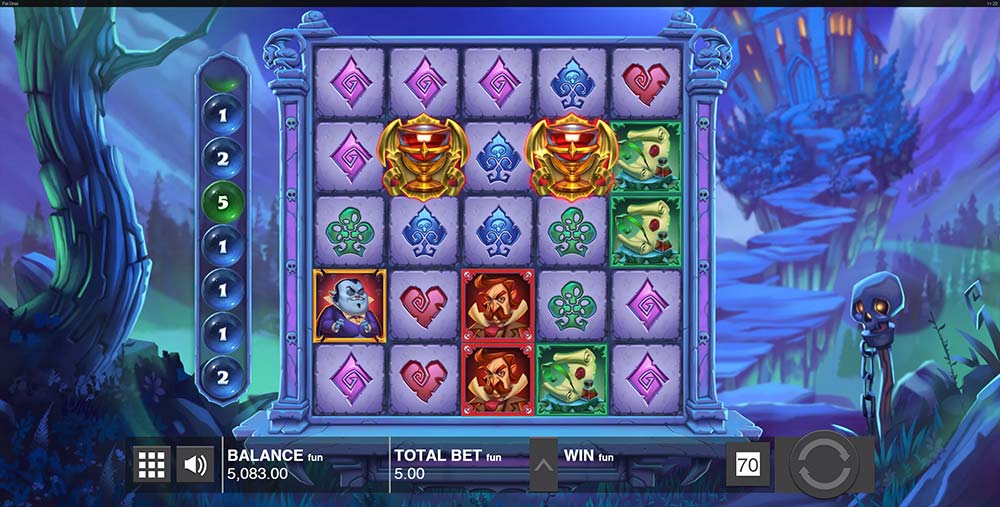 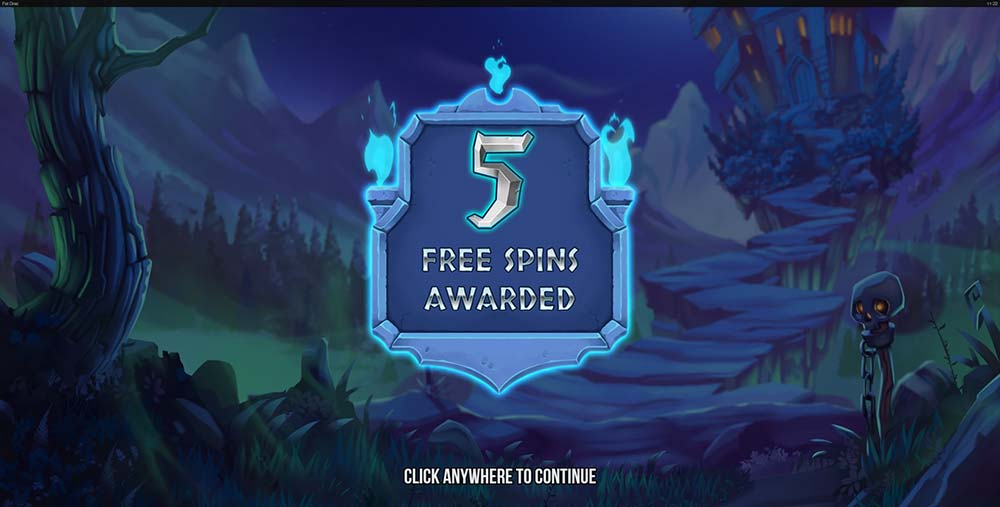 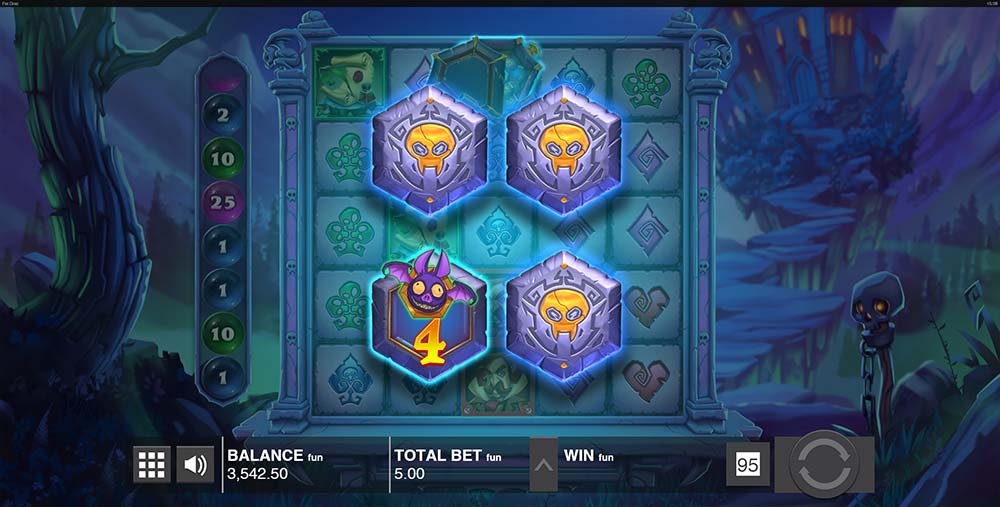 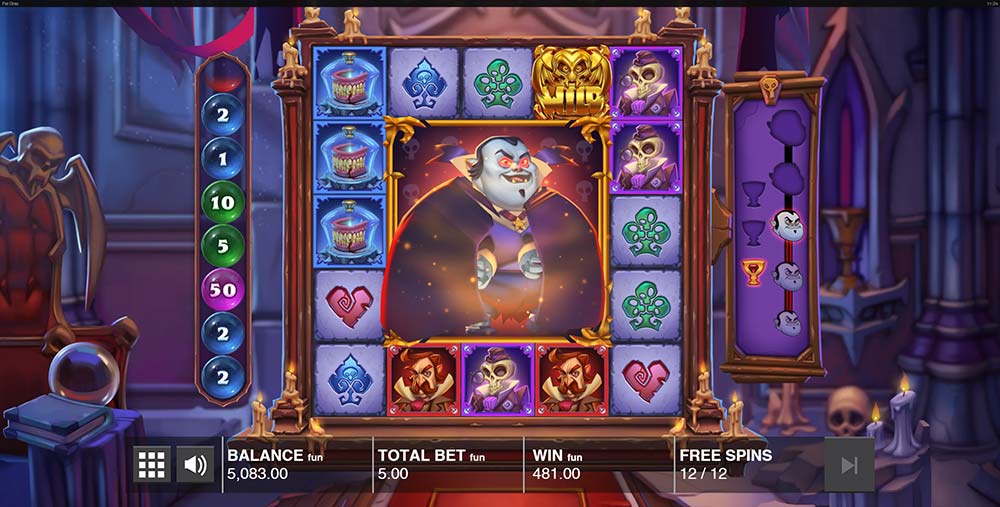 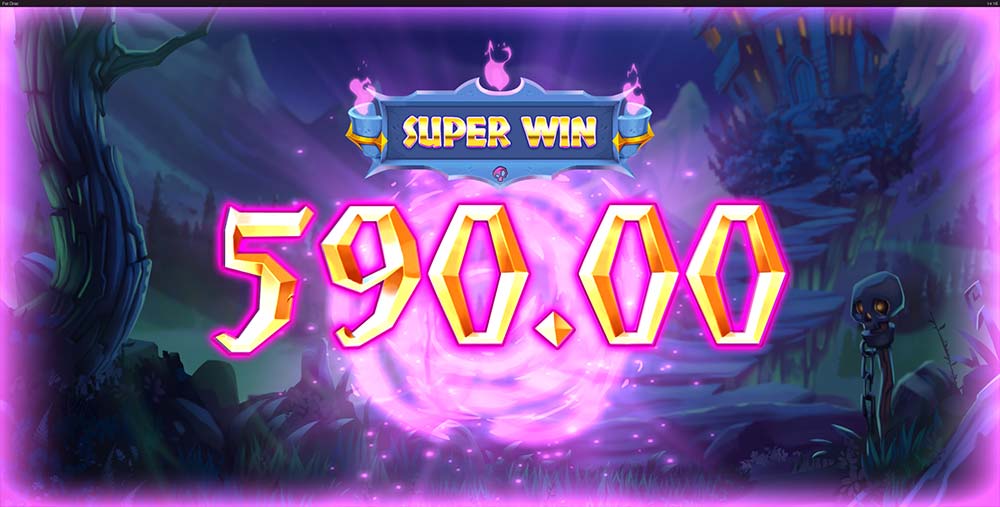 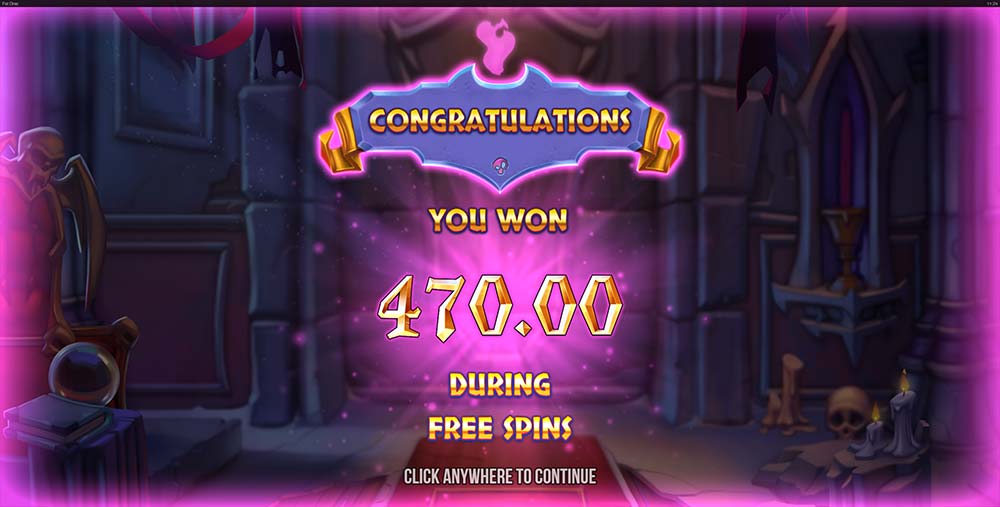 There are several unique features to look out for in the Fat Drac slot, and the behaviours of these features can alter slightly, too, depending on whether they are triggered in the base gameplay or during the free spins round.

The prime example being the Coffin Pick feature which has a variety of extra pick rewards during the bonus round! 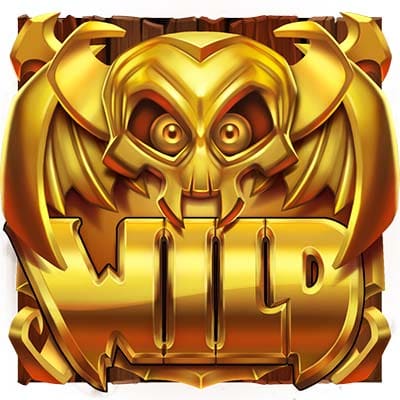 Firstly the Fat Drac symbol is both a Reveal and a Scatter symbol. When it lands in view on the reels, it will reveal a paying symbol or a Bat symbol.

If a special Bat symbol is revealed, a Bat will fly to one of the Instant Prize Bubbles, awarding this stake based value as a win. The regular symbol reveal would require more matching symbols to form any wins like a regular payline win.

To trigger the free spins, you need to first land this symbol on the reels with at least one of the Blood Goblet Scatter symbols to trigger the Free Spins round. 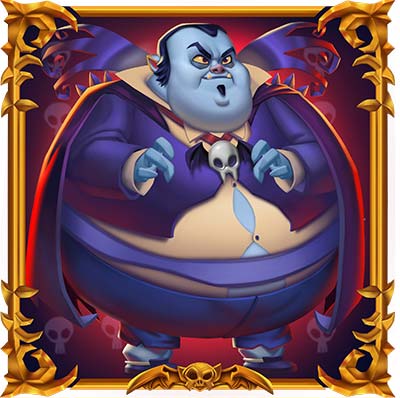 The Instant Prize Bubbles are one of the prominent new features to the "fat" series of slots. These instant prizes can be found in the Base Game and during the Free Spins and are stake sized bet multipliers that go all the way up to 50,000x!

Seven of these prizes are visible to the left of the reels, and they nudge down one position with every spin.

Winning these prizes can occur from the Bat Reveal from the Fat Drac symbols, the Coffin Pick Feature, or the Fat Bat feature, which awards all visible prizes! 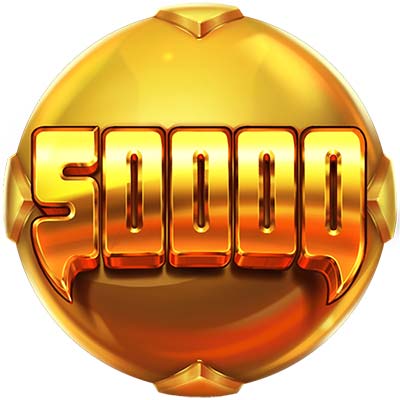