Is the New Jurassic World Slot From Microgaming a Roaring Success or Ready for Extinction?

Prepare yourselves for the unleashing of the 3rd in the Jurassic Park/World franchise of slots from Microgaming as the Jurassic World: Raptor Riches slot prepares to escape into the wild on the 22nd September 2021.

With the design of the slot handed over to Fortune Factory Studios, this 3rd Jurassic Park / World created for Microgaming is again based on the popular film series.

Various characters from the film, such as Owen Grady and Claire Dearing, are valued as the highest paying symbols. Other actors make up the rest, and different dinosaur-themed symbols make up the lower-paying symbols on the reels.

Along with wilds and a unique Indoraptor Wild Stack that acts like a walking wild seen on previous slots such as Jack and the Beanstalk (NetEnt).

Special Features on this slot include Free Spins, Win Booster, Walking Wild Reels and several stake based Jackpot Prizes that can be won on any spin. 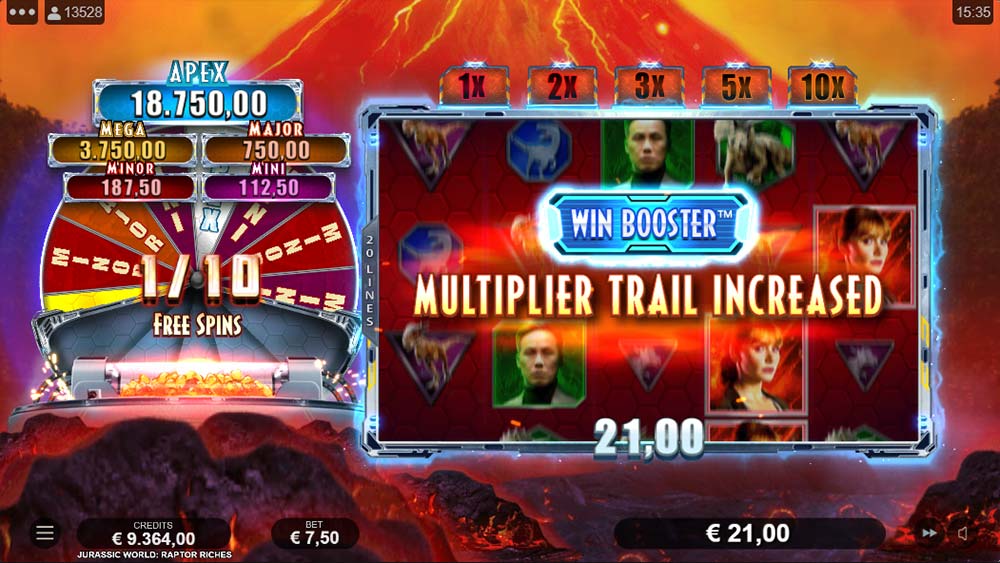 The base gameplay in Raptor Riches takes place on a standard 5x4 reel set and comes with just 20 fixed paylines. This goes somewhat against the current trend of Ways, Megaways and other super-high variance machines, including the original Jurassic Park and Jurassic World slot, which was a 243-way machine.

A lot of the screen real estate is taken up by a colossal jackpot wheel to the left of the reel set. This brightly coloured Jackpot feature can activate on any spin during the base or bonus gameplay.

The value of these jackpots is stake based so if you increase the bet size, the jackpot rises in value too, with the most significant Apex Jackpot offering wins of 2500x stake!

The first decision to make, however, is whether or not to activate the Win Booster Feature. The cost to activate is 1.5x the current bet size, so a regular bet size of €5 is increased to €7.5.

If activated, the symbol wins do not increase (in this example, they would still pay the same as the original bet size based on a €5 bet). Multipliers above the reels come into play from the Walking Wilds and increase Multiplier values in both the base game and free spins round with this feature activated.

Think of it as a "slight boost in volatility feature". With it activated, your cost to spin is increased but countered by the higher multiplier values and will provide bigger wins!

The standard RTP of this machine is 96.02% and with the WinBooster™ activated is 96.04%, probably not noticeable in regular play but worth noting all the same. 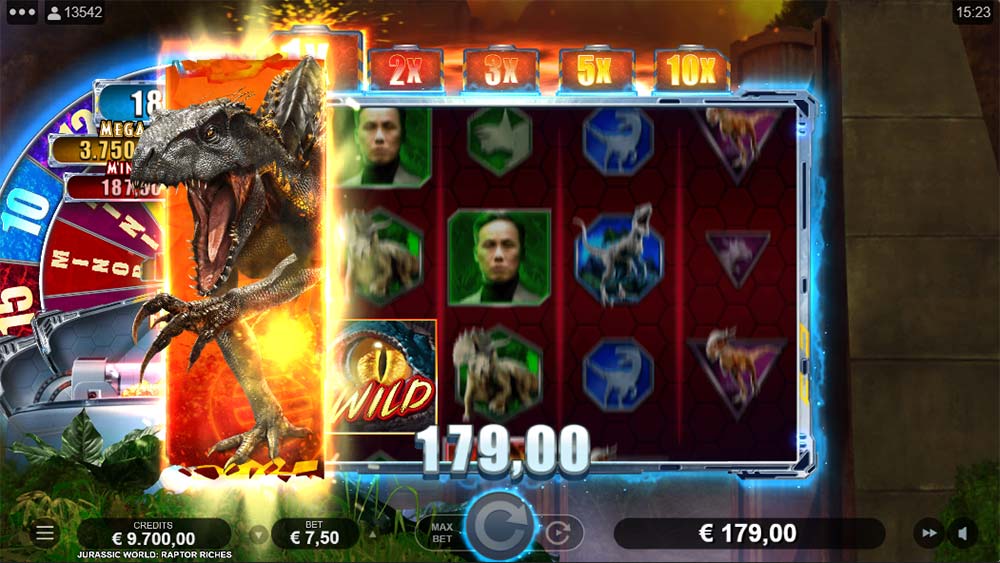 The Walking Wilds and Respin feature is the core feature of this slot machine. There are special Indoraptor Wild Stack symbols on the reels, which, when landing anywhere in view, will nudge to cover that reel completely and then trigger the walking wild and respin feature.

The respin feature moves this wild reel one reel to the left during the spin, and this process continues until the wild reel is removed from the reel, ultimately providing one more final spin.

The key feature here is that multipliers increase with each respin awarded, so wild reels that start on the last reels give you way more opportunity for higher multipliers.

With the Win Booster Feature activated, the final multiplier values are increased hugely. These values get boosted even further during the main bonus round with a maximum 20x Multiplier on offer with Win Booster!

We've included a breakdown of the multiplier differences in the base game below to summarise this feature. 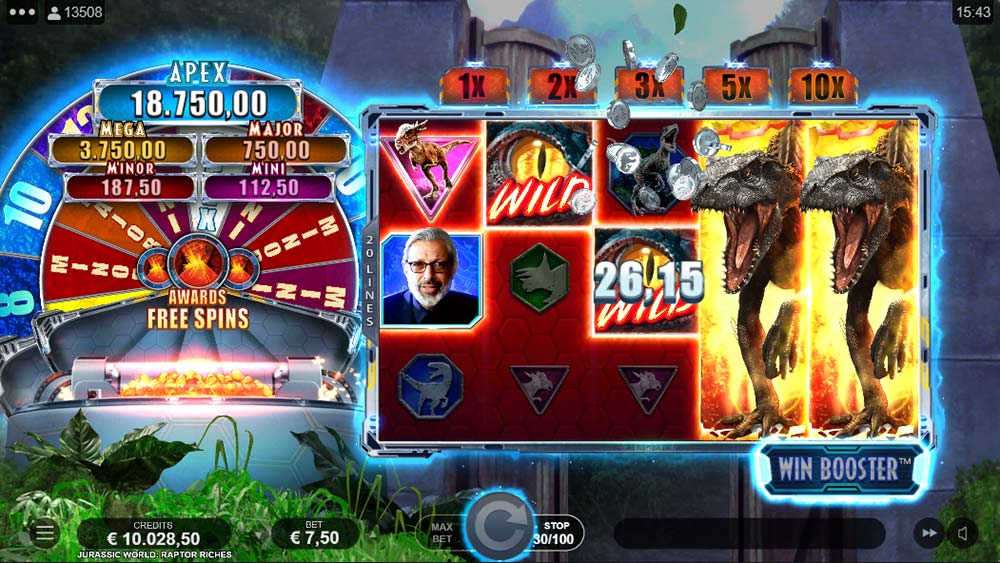 The base gameplay of walking wilds, respins, and rising multipliers give a great taster of what to expect during the free spins bonus round. With a pretty high hit frequency of 44.45%, you can expect consistent and sometimes significant wins from the base gameplay, which kept our interest up whilst waiting for the bonuses.

There is, of course, the vast Jackpots on offer, too, and these can trigger on any spin, but we will cover this extra feature later in the review! 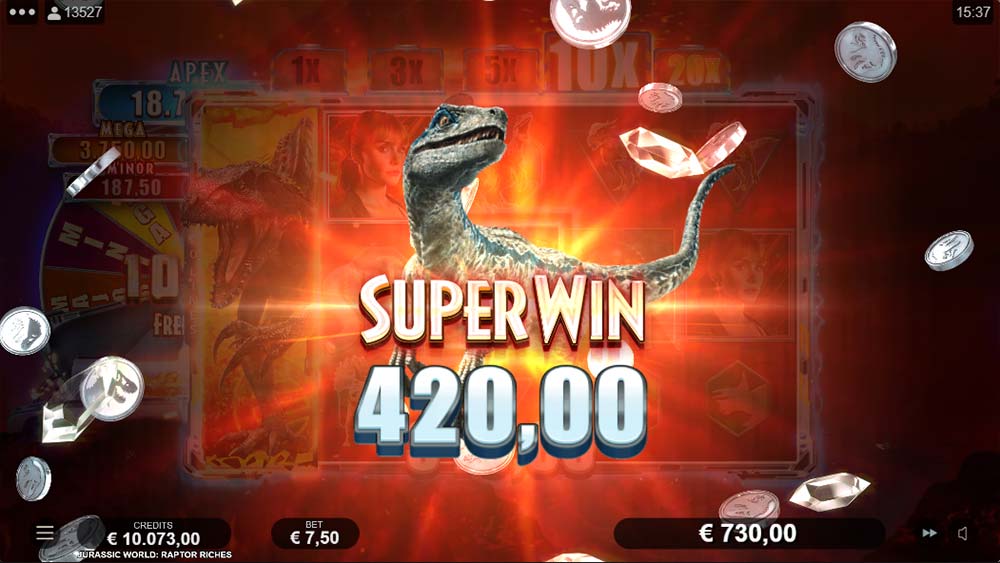 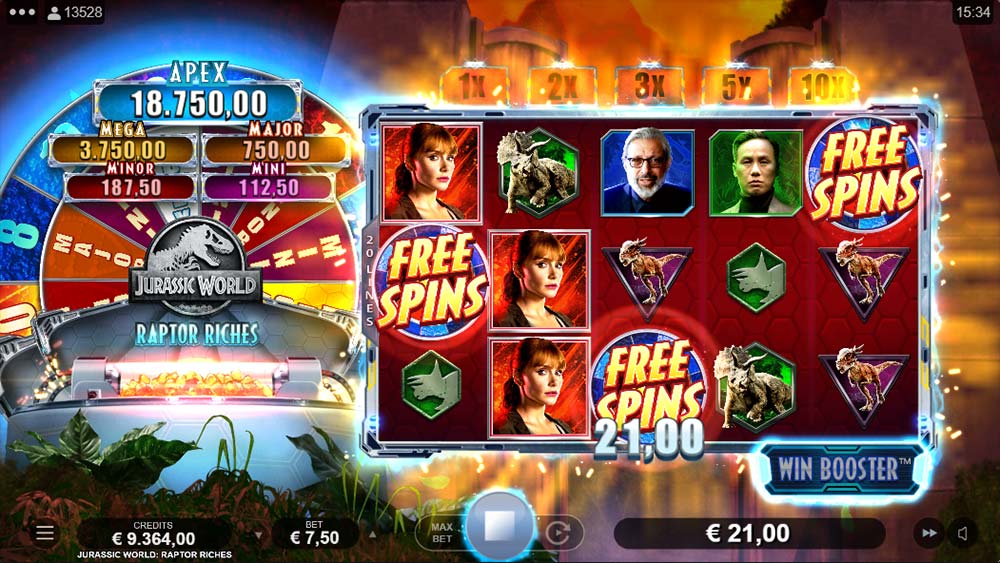 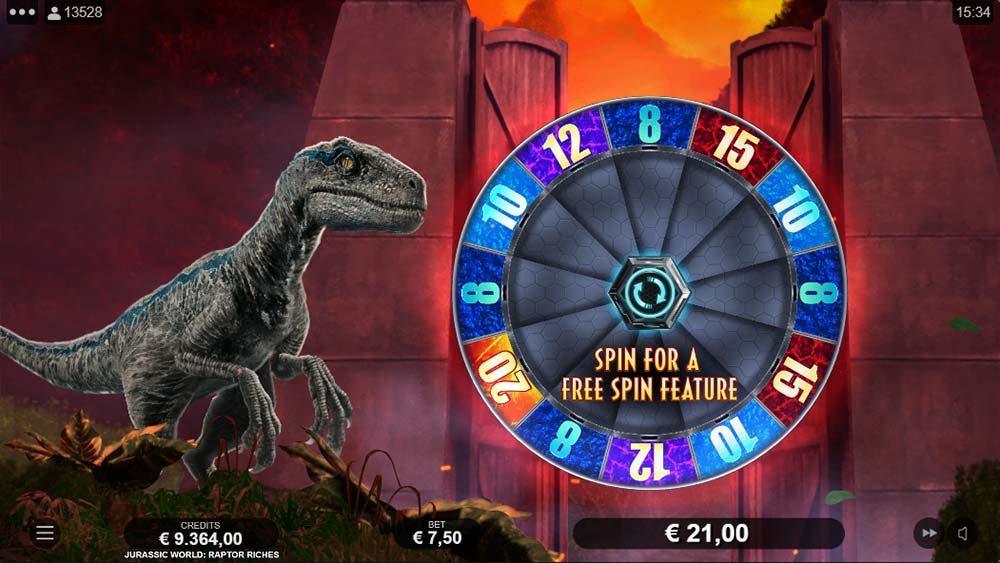 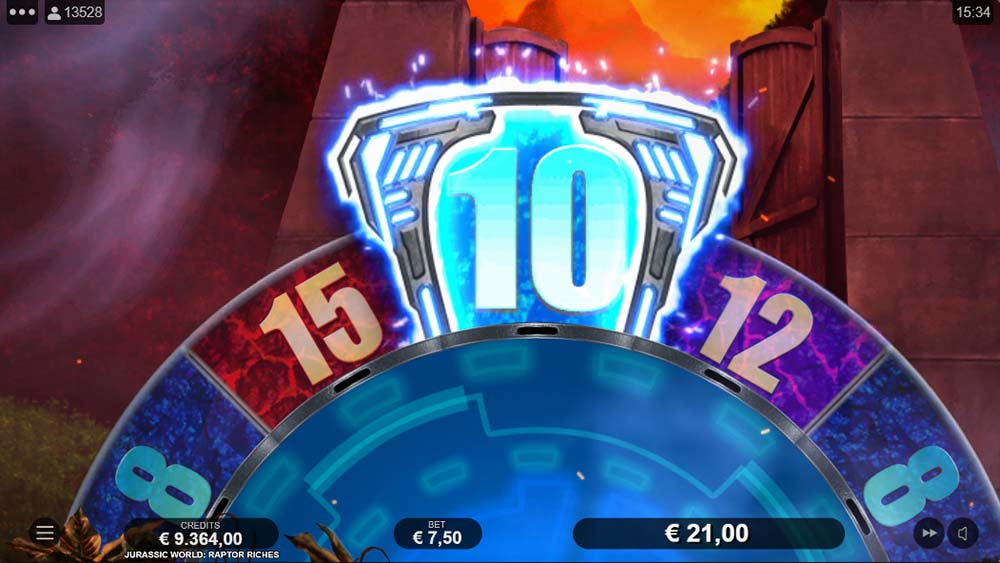 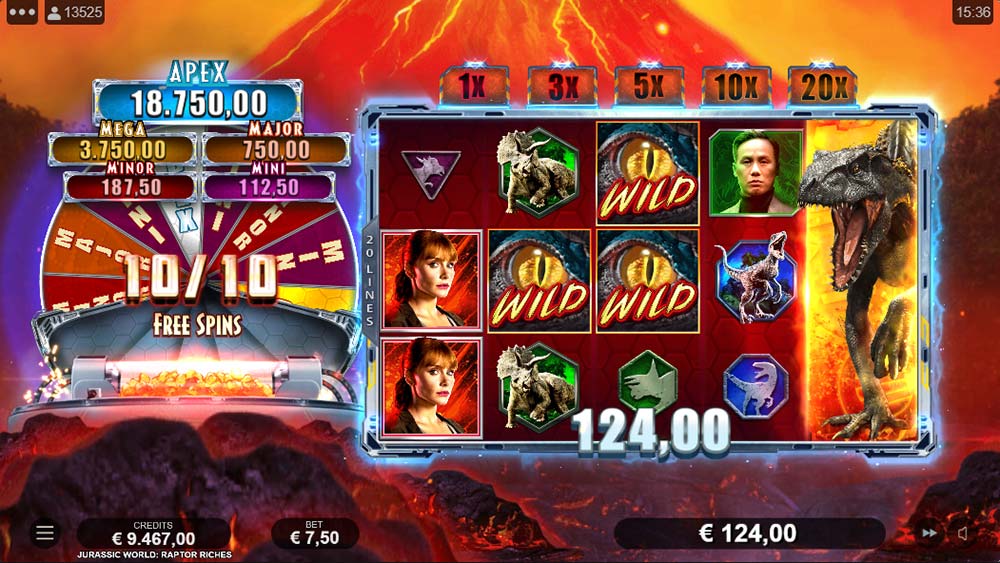 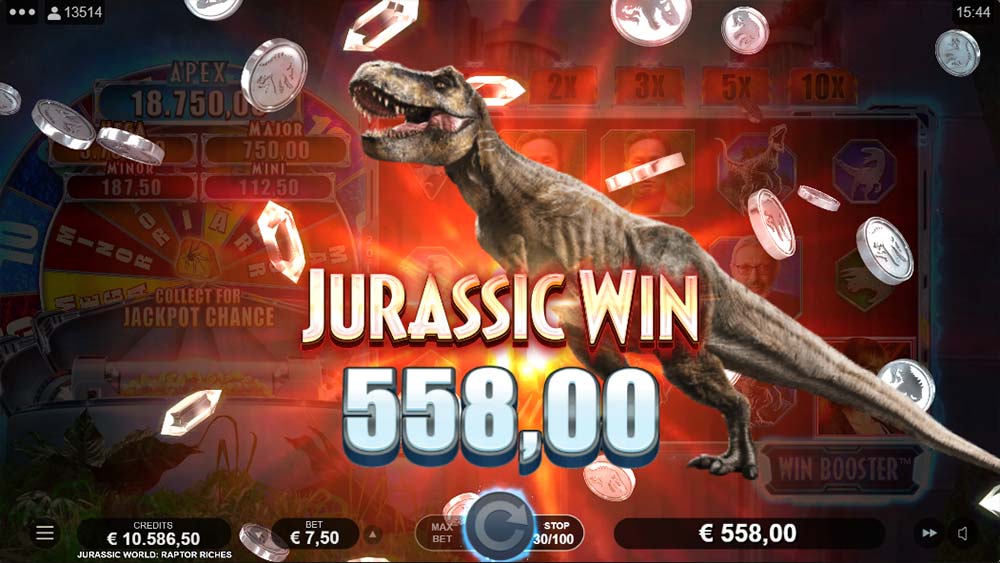 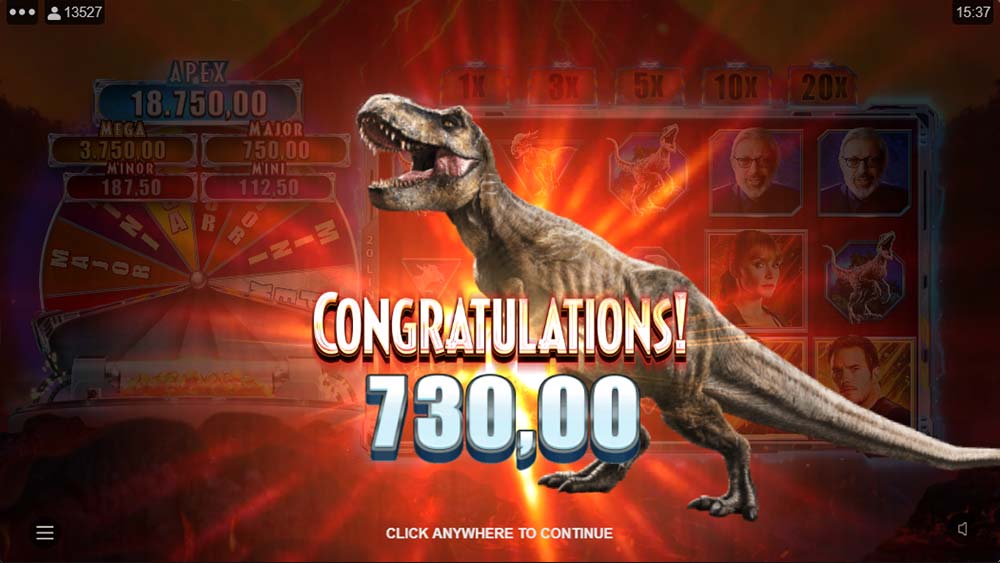 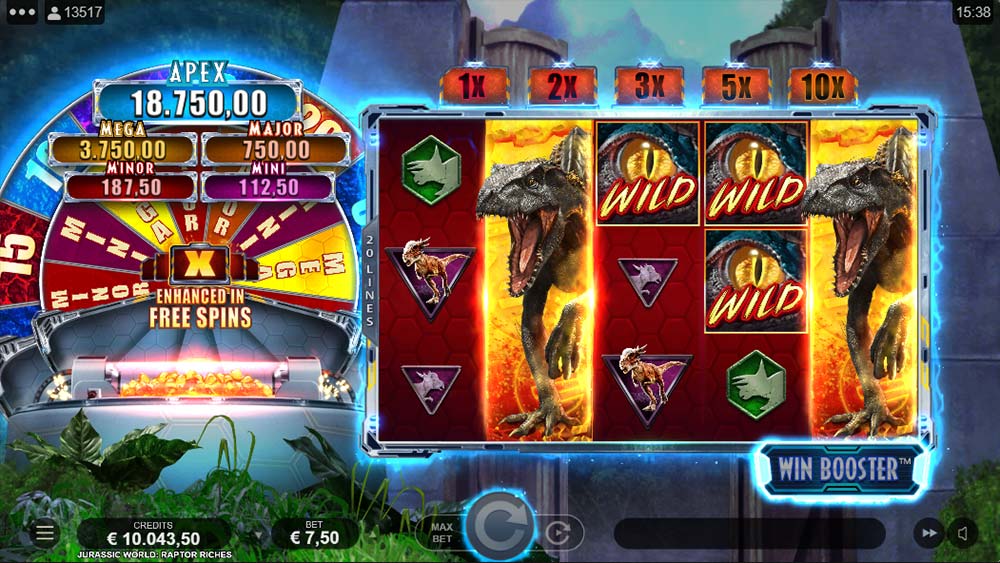 The main free spins bonus round is triggered by landing three scatters on reels 1,3 and 5 before the bonus round begins. You get to spin a wheel that awards the number of starting free spins.

A 20x Multiplier on the 5th respins is the maximum if you have enabled the Win Booster feature.

There is no re-trigger or even extra spins on offer here. What you win on the free spins wheel is your total number of free spins, although with lots of re-spins, this can extend the bonus feature massively. 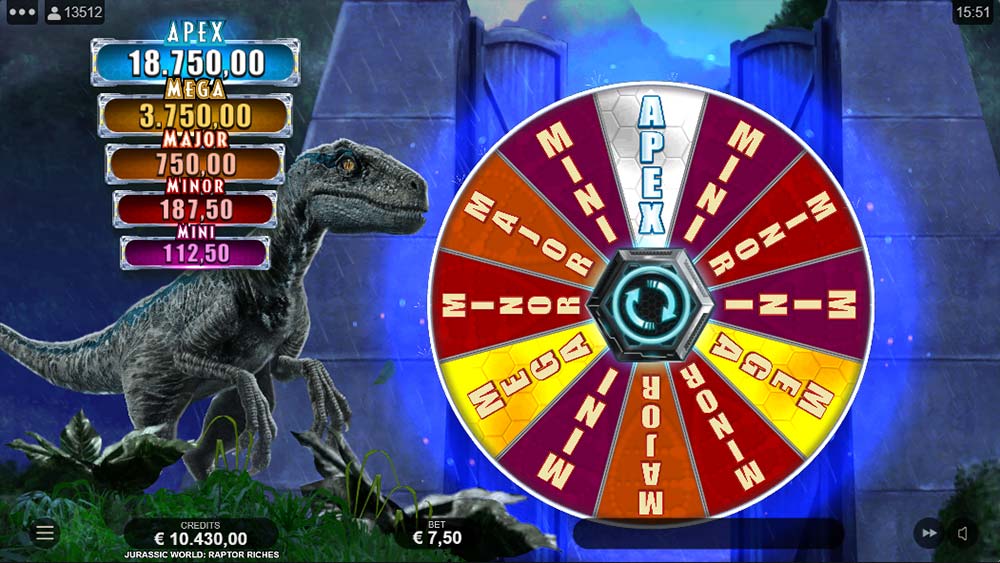 The Jackpot Wheel feature is present in both the base game and bonus round. There are small Amber encased symbols overlayed onto some of the regular symbols that, when landing in view, have a chance to trigger this Jackpot Wheel.

These special symbols are highlighted and visibly added to the collection pot under the wheel, making it obvious how this process works. It is still, however, a chance to trigger the wheel!

The Jackpots values are based entirely on stake size, no progressive jackpots on offer here. The more you bet, the higher these values become. Based on the following multipliers.

The values of these Jackpots are increased by activating the Win Booster Feature. Jackpot values are fixed and based on the total stake multiplied by these values.