MLB 2020 Playoffs: How will the league’s 16-team postseason look?

Major League Baseball’s 2020 season is one of the most unique in the league’s history. To cap off an extremely unique season, the MLB 2020 Playoffs will be just as unorthodox. 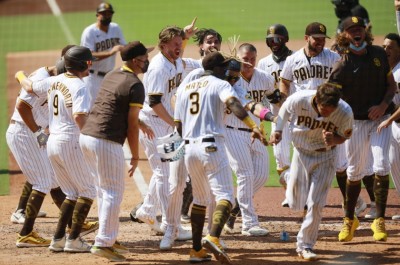 The MLB trade deadline passed on Monday with several teams making big moves. The San Diego Padres and Toronto Bluejays were big winners on trade deadline day. The Padres were the biggest of them all and will fancy their chances of winning the World Series this season. Not only do the Padres have the best uniforms in MLB, but their chances of making the MLB 2020 Playoffs are good.

Leading sportsbooks have the Padres at +1600 to win the World Series, which is 10th highest odds. So, why should a team with a 22-15 record as of September 2 be so far down the pecking order in World Series odds?

The MLB 2020 Playoffs won’t have the normal format that we have seen for years. This year will see an expanded 16-team postseason featuring more teams due to the 60-game season teams are currently playing. Teams are not playing equal schedules and some clubs are playing weaker schedules than others. The MLB 2020 Playoffs 16-team postseason is meant to sort out the teams due to the shortened regular season.

The expanded 16-team playoffs will begin on September 29th. The playoffs will run through October 31 when the expected seventh game of the World Cup will be played, if the playoffs go that far.

How many teams will make the postseason?

Sixteen teams will make the playoffs with eight from each league (American League and National League) qualifying.

The playoffs will feature four rounds, the same number we have seen since 2012. The single-elimination Wild Card round will not exist this season.

What is the MLB Playoff format?

Who are the favorites to win the World Series 2020?

The playoffs are aimed at weeding out teams due to the shortened regular season. At the moment, the favorites to win the World Series remain two of MLB’s long-time favorites, according to leading sportsbooks.

Odds as of September 2nd courtesy of Bet365.

MLB 2020 Playoffs: How will the league’s 16-team postseason look?