We’ve recently shared with our readers a Message we received speculating that something was not right with the random number generator used by one of the online Poker sites that we represent. We’re constantly inundated with comments and emails alleging improper dealing at virtual cardrooms, and the vast majority of them are deleted without being read in full.

However, the author of this particular text was respectful and deliberative in his approach, and so we elected to publish the message and our response to it. We have since received further communication from this individual, and we’ve seen fit to respond again to him. 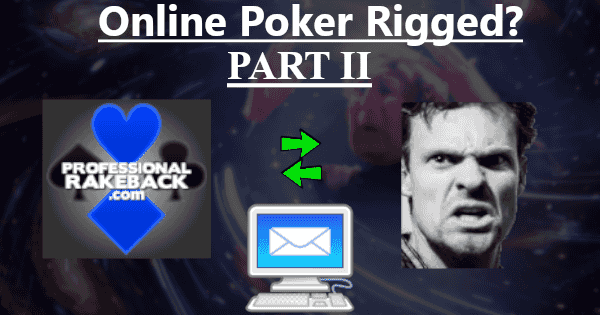 Email Response and Our Thoughts

Below, you will find the response given to our write-up by the original sender of the message along with our new reply. We have broken up his text into sections with each section followed by our opinion on the views expressed therein.

Thanks for your time in responding to my message through the article. The article is written well, and while I appreciate that you acknowledged my message as honest and well-written, it was unfair and completely missed the point of what I was trying to convey. I don’t really care since I’m anonymous on it — however, the word “rigging” should’ve been avoided.

My message was written to convey an honest perspective that while I believe that the RNG’s on many sites may not be truly random, I still do not believe they are “rigged” against me or anyone else. As you quoted in the article, I clearly said I don’t think the sites are there to want me to lose by any means, but rather that their RNG’s do not have the same randomness as a shuffled deck of cards does.

In our previous article on this subject, we did indeed classify the hypothesis we were presented with as a kind of “rigging” allegation. The definition of “rigged” is certainly open to interpretation, but rather than come up with new categories for, e.g., the deal being adjusted to benefit certain users, the RNG being altered to produce more action, flawed algorithms leading to bizarre results, et cetera, we have opted to lump all of these allegations into the category of “rigged.”

We certainly didn’t mean to imply that the OP was making claims that he actually wasn’t, but in order to ensure that our explanation was useful to as many people as possible, we felt that we needed to address points that are applicable to many fallacious propositions, not just the specific one we were presented with. Hence, our use of the catch-all term “rigged.”

Yet the very title starts with “Is Online Poker Rigged?” Really? Lack of optimal RNG performance is very different than rigging. The statistical analysis on deviations in relation to how my results could’ve turned out over my sample size, for example, is completely irrelevant. Do you think your readers don’t know that variance causes deviation in results?

The question “is online poker rigged?” pops up again and again and again while the particular conjecture put forward by the sender of the message is a topic of only niche interest. Therefore, we attempted to broaden the scope of our article so as to appeal to as many people as possible.

We don’t think that a discussion of the variability of results over inadequate sample sizes is “completely irrelevant.” Surely, the author of this text wouldn’t believe the RNG to be faulty after observing just a single hand or a dozen hands. There is some number of hands over which our contributor noted the outcomes and then deemed this sufficient for drawing his conclusions.

Our point is that 150,000 to 200,000 hands (which is the volume of hands indicated in the previous message to us) is unlikely to be enough of a sample size to reach such a verdict. This is especially true when these kinds of inferences are made without examining detailed logs and statistics on the hands in question.

As far as whether or not our readers understand the deviations in results caused by variance, our answer is: honestly, no. Our readership consists of a broad range of Poker Players from the total novice to the veteran, 12-tabling grinder. Newcomers to the game almost always underestimate the variance involved. Even many experienced pros – especially those who ran hot during the beginning of their careers – perceive the swings related to poker results as being smaller in magnitude than they actually are.

We seldom decline an opportunity to expound upon variance and how long the long run truly is. It’s something that most poker players consistently underestimate.

Jumping on my “big claim” questioning iTech Labs’s reliability was opportunistically sleazy, since I know nothing about the company and only mentioned this to note a possible correlation that is obviously pretty baseless. If I was trying to prove something, I would provide facts that I’m informed about, and iTech Labs or RNG’s in general are not areas of my expertise. This was in my message to see if there was something you knew about the company that I didn’t.

OK, fair enough although we take exception to being characterized as “opportunistically sleazy.” We were given a claim that we felt was not based on anything substantial, and we went on to debunk it. Since our correspondent knows better now and states that this line of argument “is obviously pretty baseless,” there is nothing more for us to say about it.

I did not write this message to you to pose an argument (let alone an article) but rather to give my perspective from my own subjective experience. My intention was to have a conversation with players like you guys who, from what I would imagine, are much better poker players than me and who may be able to talk to me honestly with their own experiences and what they’ve heard.

We appreciate the time this individual took to write to us not once but twice. As far as being better poker players than him, we can’t comment definitively either way on that, but it is true that we have been playing the game for decades. In that time, we have seen all kinds of shadiness, including:

One thing we have not ever encountered is unreliable RNGs. In fact, we have only heard of a bad online poker RNG a single time: at Planet Poker, the first online poker site in existence.

At the end of the day, I’m grateful ACR exists as a US player. I’ve continued to play tournaments on ACR and don’t plan on stopping anytime soon because it’s the best option I have as a US player. I know Phil Nagy and his team have good intentions and do not rig the site, I simply am questioning the quality of their technology to produce random cards.

Pokerstars has a video on YouTube describing their hardware technology that’s extremely advanced for their RNG, and the representative even explicitly says, “if an RNG is a software, it cannot be truly random.” I think asking about ACR’s RNG technology is a question worth posing.

It is true that incorporating hardware inputs into a random number generator can make it truly random as opposed to just pseudorandom. We scoured the websites of Americas Cardroom and the Winning Poker Network to see if they said anything about this subject, and we didn’t find anything. This might be a worthwhile avenue of research to pursue further although we would be very surprised if ACR isn’t including hardware-generated random data in its algorithms.

However, even if it turns out that the RNG at Americas Cardroom is entirely software-based, this wouldn’t cause funny-looking board runouts (at least not unless there were other flaws in the formula). Rather, it would mean that anyone who could figure out the seed value of the RNG for any given hand would be able to predict the upcoming cards, which would definitely be a major security hole.

The “backtracking” and apparent doubting of my own points, as you called it, was a pretty stupid bullet to throw me — if my goal was to prove that there’s a site with a faulty RNG, I would go and attempt to do so. It seems, however, that you need me to remind you that this wasn’t my intention — it was simply to start a conversation rather than to prove a point.

Well, we are sorry if we mischaracterized the nature of the account we were hearing, but it did seem to us that the writer of the text was trying to advance a definitive assertion – one that we found to be lacking in rigor.

However, I sincerely do appreciate the time you guys spent on this and your work on the site in general — I can tell you guys love the game and it’s good to have you guys be such a large part of it. Good luck on the felt.

We are happy that our efforts at ProfessionalRakeback are appreciated. We do indeed love the game, and we enjoy writing up poker news, reviewing established and new sites, informing our readers about online poker legality, and – if we have any time remaining – firing up a table or two every now and again.

We wish our correspondent good luck at the tables as well.

Fair and Reputable Places to Play

Though bogus RNGs are not something to be worried about, there are other legitimate issues with some internet poker providers. We’re committed to steering our visitors toward only those rooms that are upstanding and reputable. To that end, we have crafted a guide to USA online poker that will help point you in the right direction if you’re seeking an online poker home.

Dreaming About Cellphones, What Does …
Sexy Games for Married Couples
Looks like the correction is over… bo…
How to Develop an Educational App?
Wealthy Affiliate Scam or Not