The recent 2020 U.S. Presidential Election was not only the biggest political event of the year but also the largest betting market. Eager punters put down their action on the victors in various states, the nationwide popular vote, the performance of third parties, and many other possibilities. Of course, the main event was the overall winner of the presidential vote as determined by the Electoral College system.

As observers watched the results coming in on Election Day, Tuesday, Nov. 3, any hopes of a speedy resolution were dashed. Several states remained in question as mail-in, absentee, and military ballots came trickling in: enough to cast doubt on the projections being given. The number of ballots sent in by mail this year far exceeds the figures for previous elections as coronavirus impelled many who would otherwise have voted in person to instead mail in their selections.

By Saturday morning, major news outlets, including CNN, ABC, NBC, and the Associated Press, had enough confidence in the totals to name Democrat Joe Biden the winner. Biden declared victory in a speech shortly thereafter.

However, the campaign of Republican President Donald Trump did not concede defeat. Citing voting irregularities and possible fraud in several states, Trump vowed to pursue legal remedies, meaning that we might not hear the final word on Election 2020 until all legal challenges are exhausted, which could be months from now. 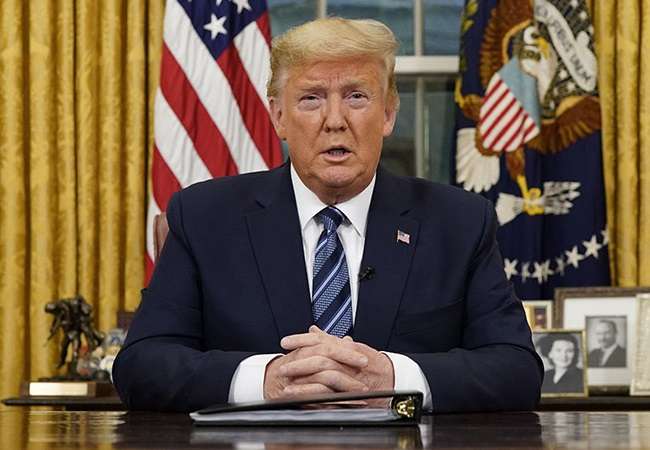 Although a few sportsbooks, like bet365, Betsson, and Sportsbet.com.au, have decided to grade Joe Biden as the winner, most of them have opted to wait until later. The exact conditions needed to affirm a winner vary from book to book. We have taken a look at the policies at popular U.S.-facing bookmakers and have included them below for your enlightenment.

Bovada states that the recent Presidential Election was the largest betting event in its history. This indicates that there’s a lot of bettors’ money tied up in the results. Bovada has released a tweet explaining the conditions needed to identify a winner:

In order for Bovada to declare a winner, the votes need to be certified. As explained by balletopedia.com, the deadlines for certification vary state by state, and this process could drag on into December.

If either of two events take place before then, Bovada will consider either of them sufficient to name Joe Biden the winner. President Trump conceding defeat will do the trick. So will all legal challenges ending and recounts failing to give Trump the needed Electoral votes.

BetOnline, the sister site of Sportsbetting.ag and TigerGaming, has revealed that it has booked wagers in the “eight-figure range” on the election. Thus, there’s a lot of money riding on the outcome. The company headed to Twitter to give customers guidance about their 2020 election bets:

Although the triggers listed by BetOnline for evaluating wagers on the election are a bit vague, the firm did name two obstacles to finalizing these bets: state recounts and legal challenges. This implies that once these two roadblocks have been cleared, it will be time to recognize the winner. Until then, BOL advises, “we need to be patient.”

Although Bookmaker isn't one of our top-rated sportsbooks for a variety of reasons, many of our readers have access to its betting portal through its partners Americas Cardroom, BlackChip Poker, and Ya Poker. Therefore, card sharks who occasionally bet on events like the 2020 Presidential Election may be interested in how this firm is proceeding. We have not seen any official statements from the company, but a user on the Twoplustwo forums contacted Bookmaker and reported back what they told him:

Bookmaker is waiting for a Trump concession and for court challenges to be complete. However, the current president doesn't need to exhaust all available legal avenues; as long as he loses enough of them that it would be mathematically impossible for him to prevail, Bookmaker will count that as a Biden win. Failing any of these outcomes, the bets will pay off on inauguration day.

Intertops has been an online sportsbook since the late ‘90s, and so therefore it’s a trusted resource for those looking to bet on elections and all kinds of other events. While the company has not released a statement on its election-grading rules, we got some info from a Live Chat representative: 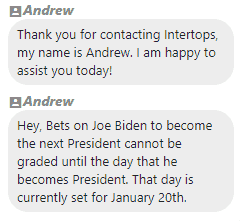 Unhappily for bettors, it looks like their money at Intertops will be tied up until inauguration day on Jan. 20.

Nitrogen is the leading Bitcoin sportsbook, which makes it beloved by those who want to bet with crypto-currency and appreciate its no-dox policy. It also tends to have lower vigorish than almost every other bookie out there. When we checked Nitrogen’s website on Sunday, Nov. 8, we saw a notice directing us to the section of the rules dealing with politics: 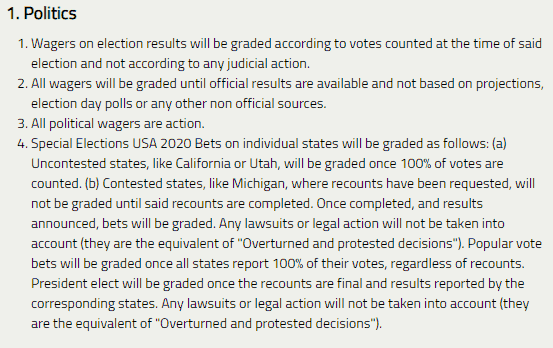 While the wording is somewhat confusing, it appears that Nitrogen will wait until all recounts are completed but will not take into consideration any pending legal challenges. The format for recounts are different in each state. Under the rules in Georgia, which seems to be definitely headed for a recount, the final tally could take until the end of November to be completed. The election laws in Wisconsin, another disputed state, would put the deadline for a recount to be finished at around the same end-of-November time frame.

Can I Still Bet on Who Will Become President?

At this late hour, all the mainstream, reputable U.S.-friendly books have stopped accepting bets on who will become the next president. The PredictIt site, which bypasses U.S. legal rules by letting users buy and sell shares on various outcomes, does still have Trump and Biden listed. As of Wednesday, Nov. 11 at 2:00 p.m. ET, a share of Joe Biden costs $0.87 while backing Donald Trump costs only $0.17. The winner will pay out at $1 per share.

The international Betfair Exchange, which lets bettors back and lay selections with each other, does still have an active trading market for Trump and Biden, but it's not accessible to U.S. users. Still, viewing the odds shown may prove instructive. As we went to press, Biden was a -1000 favorite while Trump was a +900 underdog.

Though trying to put money down on who will become the next U.S. president is a pastime that has largely run its course this year, there are still a number of amusing wagers you can make related to the election.

One offshore sportsbook briefly offered a line on whether or not Donald Trump, if he loses, would attend the inauguration of Joe Biden. Initially priced as a -200 favorite to attend, the odds moved sharply over a couple of days to +250 that Trump would attend.

Our friends over at BetOnline have created a funny prop bet relating to the election, and the book on this event is still open as of 2:00 p.m. ET on Nov. 11. You can try to predict:

Will Melania divorce Donald if he loses election? 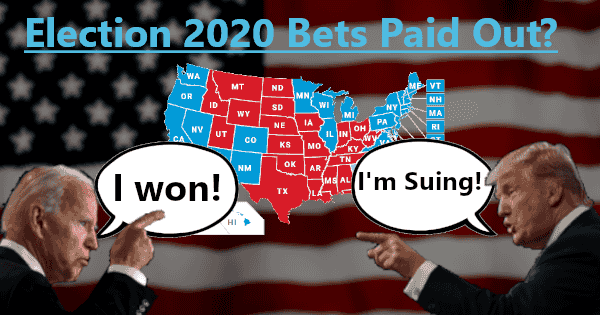 Though legal USA sports betting has expanded significantly following the Supreme Court’s landmark Murphy v. NCAA decision, this hasn’t made much of an impact on election betting. This is because, according to the laws of the various states that permit sports betting, accepting real money wagers on political elections is illegal.

Thus, those interested in wagering on the election had to head elsewhere: to online, offshore sportsbooks. These operators did a booming trade on the election. Many experts believe that more than $1 billion was bet this year on the Presidential Election.

There’s nothing in the law preventing private individuals in the United States from wagering on these platforms. All of the statutes that target this kind of behavior attach penalties to those running the sports betting sites, not their patrons.

If you think betting on sports – including eSports – politics, and entertainment events would interest you, then you can check out a list of the best internet sportsbooks for Americans to find out how to get started.

Cup and handle failed, what now?
Green Card Denials Increase Substanti…
Interview with the legendary comic bo…
How and Why America Was Hit So Hard B…
How Universal Basic Income Gets Attra…